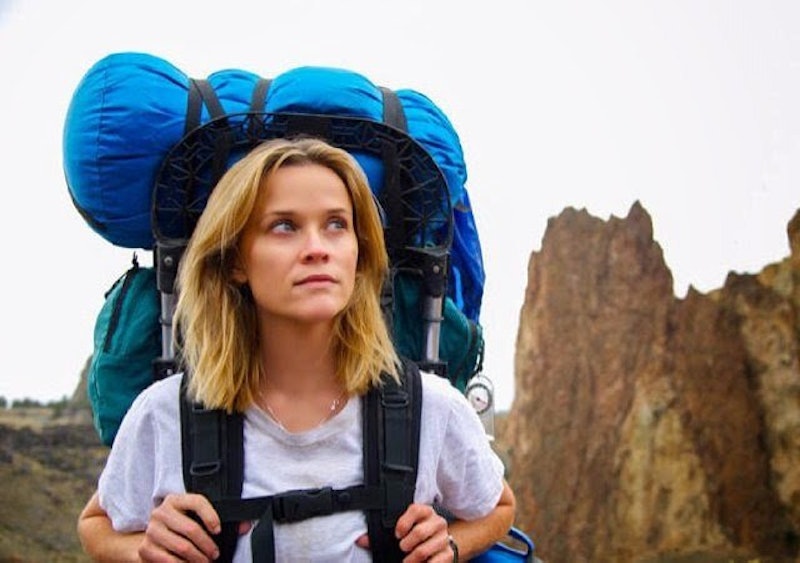 First, the bad news: You're going to have to do a lot of reading from now until December if you want to be up on pop culture. Now the good news: Or you could just watch the movies. Of all the movies set for release during the rest of 2014, a whole lot of them — nearly 20, to be exact — are based on books. Of course, some of the adaptations are more exciting than others; for every Wild , a hugely anticipated movie based on an acclaimed memoir, there's a Left Behind , a Nicolas Cage–starring Christian thriller. Still, the fact is, books, or at least their adaptations, are finally in the spotlight. And at a time when far too many people prefer Netflix and smartphones to reading a novel, that's a pretty exciting thing.

Yet as anyone familiar with adaptations knows, not all of them turn out to be so good. Even the ones with the most promise, the movies based on beloved, bestselling works sometimes end up becoming major flops that make you wish the filmmakers would've just left the poor book alone. In this year's crop, there's definitely a few potential disasters — but, happily, there's also plenty of films that look genuinely great. Here are 12 adaptations you won't want to miss:

Based on: The Hundred-Food Journey, a 2010 novel by Richard C. Morais.

About: The fight between an Indian family, led by Hassan Kadam (Manish Dayal), to open a restaurant in a France town and the proprietor of the restaurant across the street (Helen Mirren) who wants them gone.

Should you read the book first? You could, but you won't exactly be lost if you don't. In any event, just focus on the food.

About: Jonah (Brenton Thwaites), a teenage boy whose life in an eerie, pain-free utopia gets disrupted when he's selected to receive memories of past worlds from the Giver (Jeff Bridges).

Should you read the book first? Yes, if only so that if the movie isn't good, you'll know to blame the filmmakers, not Lowry.

About: Comatose Mia's (Chloe Grace Moretz) decision to live or die after her parents are killed in a car accident.

Should you read the book first? You probably don't have to, but there's no harm. It's a good book, and hopefully the movie will do it justice.

This Is Where I Leave You (September 19)

Based on: This Is Where I Leave You, Jonathan Tropper's 2009 novel.

About: Four siblings (Jason Bateman, Tina Fey, Corey Stoll, and Adam Driver) who reunite at their childhood home after their father dies.

Should you read the book first? It's not necessary, but it might give some more background. There's a ton of characters in both the book and the film, and so it's possible some plot might get left out — read the novel to get the missing backstory.

Based on: The Maze Runner, the best-selling 2009 YA novel by James Dashner.

About: A teenage boy (Dylan O'Brien) who finds himself trapped in a giant maze alongside a group of other boys who have no idea why they're there or how to get out.

Should you read the book first? Definitely. Yes, you'll manage if you don't, but this type of movie is always better if you have the background of and fondness for the book first.

About: A man (Ben Affleck) suspected of murdering his missing wife (Rosamund Pike) and the mystery of what truly happened to Amy Dunne.

Should you read the book first? Oh, yes. Even if David Fincher is deviating from the book, it's still worth reading it first so you can come in prepared.

Based on: Kill the Messenger, the 2006 Nick Schou nonfiction book.

About: A reporter (Jeremy Renner) who exposes a major CIA secret and becomes the target of a brutal smear campaign.

Should you read the book first? It wouldn't hurt, but you could just as well look up the Wikipedia page for Gary Webb, the real-life reporter the movie's about.

Based on: Mockingjay, the final book in Suzanne Collins' Hunger Games series.

About: The attempts of Katniss (Jennifer Lawrence) to save her nation after the war between the districts and the Capitol grows worse.

Should you read the book first? Probably, although with a movie this big, a lot of people won't. Still, it'd be good to know who Katniss and Peeta are before jumping into the film.

About: A woman (Reese Witherspoon) who, grieving her mother's death, decides to take on a 1,000-mile hike along the Pacific Crest Trail.

Should you read the book first? Yes. Wild is a wonderful memoir, and while expectations for the movie are high, it'd be nice to know that you have the book to love, just in case.

About: A '70s-era detective (Joaquin Phoenix) who investigates the disappearance of his ex-girlfriend.

Should you read the book first? Maybe, but it's doubtful that it's necessary. Plus, with a cast like this — Joaquin Phoenix, Josh Brolin, Owen Wilson, Reese Witherspoon, Benicio del Toro, Martin Short, Maya Rudolph — you'll be too busy looking at the actors to care much about any differences in the plot.

The Hobbit: The Battle of the Five Armies (December 17)

About: The battle between the dwarves and other creatures to gain control of Erebor, the Lonely Mountain.

Should you read the book first? Yup. No one wants to be the Lord of the Rings "fan" with questions about second breakfast and something called "Smaug."

About: Louis Zamperini (Jack O'Connell) a former Olympic athlete whose remarkable life included surviving a plane crash, getting lost at sea, and spending years as a prisoner of war.

Should you read the book first? Eh. It'd be helpful, for sure, but this is the type of movie that'll be perfectly enjoyable seeing without much prior knowledge.