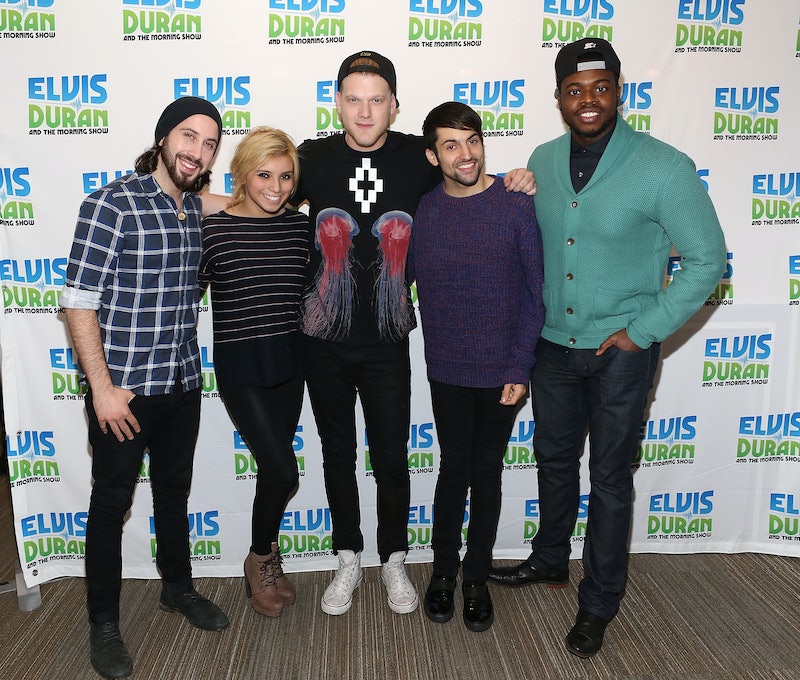 I've had a soft spot for a cappella music ever since Pitch Perfect. Since that movie did so well, I know I'm not the only one who appreciates it. While the Barden Bellas and Treblemakers are great on-screen, there's a real-life a cappella group making a name for themselves in the music industry. I'm talking about Pentatonix — who (fun fact!) happen to have a cameo in Pitch Perfect 2 . Aside from that, the group just recently performed at the Macy's Thanksgiving Day Parade and they have another seasonal gig on their agenda: the Rockefeller Tree Lighting on Wednesday. If you're not a fan, I suggest you tune in. (And if you are, I already know you will!) For those of you familiar with the band, there's another question floating around: Are Kirstie Maldonado and Avi Kaplan dating? Let's investigate.

While there seems to be an assortment of fan fiction posts on the topic, they're not actually dating. At least not for now. It turns out that Kirstie Maldonado is in a relationship with a guy named Jeremy Lewis. They even have a dog together, which means it must be pretty serious, right? Of course, I couldn't find any articles confirming this news, but her social media pages speak for themselves. Just look at this photo she tweeted of them together:

In case that's not convincing enough, here's an excerpt from the extended caption on Instagram:

Cheers to us fighting for and creating a beautiful life together as a team against any situation and it's bulls--t. And cheers to the happiest year of my life with him. Look how far we've come, honey!

Adorable! These two are pretty precious, and have apparently been together for over a year now. While dating her bandmate may seem cute in theory, there's no need to split these two up. Plus, that would probably make things awkward for the rest of the group, especially since Maldonado has explained the dynamic by saying, "We're all like one big family." Yep, you wouldn't want to date your brother.

As for Avi, what does his love life look like? If we're going by his Twitter account, he is single and focused on family. Or he's just a private person and keeps his relationships to himself, aside from the ones with blood relatives.

But if you ask me, he seems like a total catch either way. These tweets prove it:

Welp, that solves that mystery! Even though they're not dating, I'm sure they'll continue to make amazing music together, along with their other three group mates.