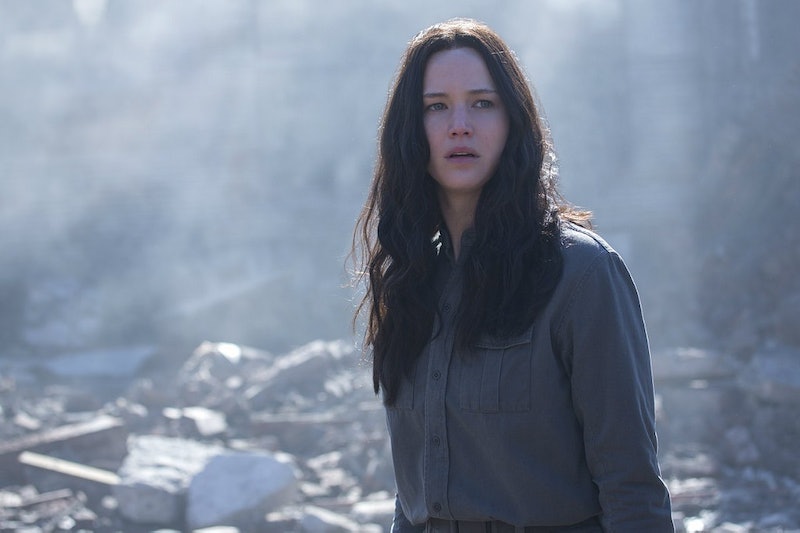 It may be a year away, but I can't help but wonder how Mockingjay Part 2 will end. The first half of the film left fans wondering if Peeta would ever be OK again. But those who have read the books know how things turn out, and (SPOILER) Peeta does eventually get back to normal. Although, just because the novel ends a certain way doesn't necessarily mean the movie version will.

The Mockingjay book ends with an epilogue that lets readers know Katniss and Peeta end up together and even have two children: a girl and a boy. It details how District 12 is still living in peace about 20 years later, and Katniss sings about how the meadow, which was once a grave, is now a safe place to play. (I'm a big fan of including another J. Law song since she was stunning in "The Hanging Tree.") It also ends with what I think is maybe one of the best final paragraphs in any series.

I'll tell [the children] how I survive [the trauma from the Games and the war]. I'll tell them that on bad mornings, it feels impossible to take pleasure in anything because I'm afraid it could be taken away. That's when I make a list in my head of every act of goodness I've seen someone do. It's like a game. Repetitive. Even a little tedious after more than twenty years.But there are much worse games to play.

I'm desperate for the final line in the epilogue to be included in the film, though I'd love to see the epilogue in its entirety. Thankfully it seems director Francis Lawrence wants to deliver. He talked to Wired last year about Part 2 and said: "The ending of the book and the book itself is just really important to me."

That's encouraging because having it mean a lot to the director will hopefully translate into an ending that the series deserves. He also hinted that we'd probably get to see the epilogue because they're keeping close to the arc of the book. “I will just say that we’re making the book," he said. "I don’t want to give anything away or anything, but we’re being very true to the book.”

In November, Jennifer Lawrence, who plays Katniss, all but confirmed that the epilogue would be the last scene. In an interview with Chilean newspaper El Mercurio she talked about how the film would end.

I’m going to be with Peeta; it’s a scene in the future. But I’m not going to let them age me. I’m already 24, and this is all I can handle. I’ve come this far. I kept various souvenirs, my hunting jackets, the leather one and my boots. And after the last scene, I intend to keep the bow. I think I’ve earned it.

I’m kind of glad Lawrence won’t allow herself to be aged because even though Harry Potter pulled off the digital aging pretty well in its final film, it still looked weird. I don’t want bad special effects to distract me from the emotional scene. But I'm optimistic that in Francis Lawrence's hands, fans will get to see the Mockingjay epilogue brought beautifully to life.