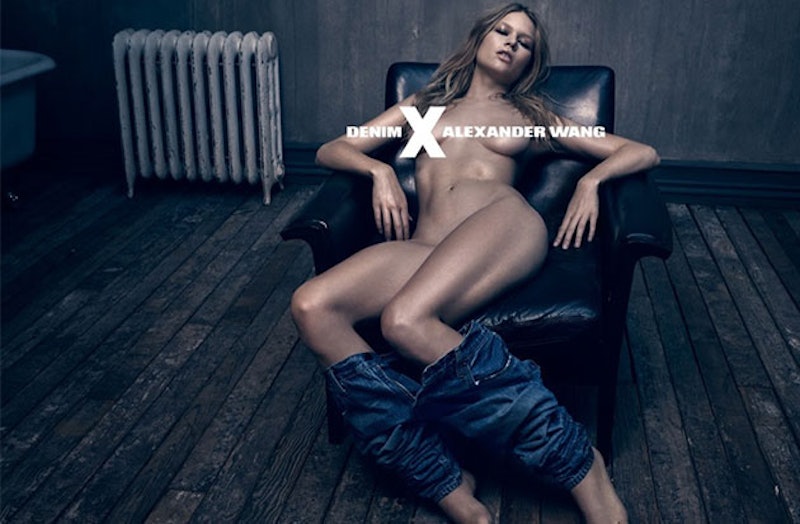 Alexander Wang released his very sexy, very sweaty denim campaign yesterday, and all I can think about is Miley Cyrus. Remember that time the singer appeared on stage half-naked at the VMAs and mimed masturbation with a foam finger and some dancing bears? Of course you do — it was chalked up as the most risqué performance in award show history by nearly every major media outlet. But how I felt during Miley’s “dance” was not stunned or offended (OK, maybe a little offended that a woman with such a large platform would squander it in such a big way, but that’s a separate essay). No — how I felt was mostly bored.

First of all, if I were impressed by twerking, I’d attend an eighth grade dance. Secondly, c’mon. Using sex to sell, or to grab the attention of an audience? It’s the oldest trick in the cultural-zeitgeist book, making this performance pretty much the opposite of risqué. Predictable, even. Had Miley come on stage in a turtleneck and not gyrated, well, then you could talk to me about shock-factor.

Don’t misunderstand, I have no vested interest in what Miley Cyrus does. I’m not a mother, so I’m not worried about the influence pop culture is having on my children, for instance. And I’m also not some kind of prima-donna prude — I once found a live sex show in Amsterdam highly entertaining because, suffice it to say, the performers displayed a lot more talent than Hannah-Montana-gone-raunchy. (Like, serious talent. Like holding-a-pen-in-the-vagina-and-writing-prose talent.) Rather, my interest is mostly anthropological.

But then… Alexander Wang and his denim.

Let me just preface this by noting that the first thing I feel when I look at these photos is not umbrage over the fact that members of a design team sat around a table and decided women would be excited to buy a pair of jeans they can barely see in the ad because a masturbating (and sweaty!) hand is the focal point. (Seriously, the jeans in these photos are about as important as the bathtub. What? You didn’t realize there was a bathtub in this campaign? That’s my point.) No — the first thing I feel is, admittedly, jealousy. I’m trying very hard to be body-positive (I love my thighs, I love my thighs, I love my thighs), but dammit. I’d love to look like Wang’s model, Anna Ewers, and I can’t deny it.

But after envy, it’s the umbrage thing. Wang assumes naïveté on the part of his targeted demographic: you're not just buying jeans, you're buying an unspoken promise that if you put them on — or at least wear them around your ankles — you'll look as good as an oiled-up Ewers. Which isn't so egregious, really, when you consider the context of, well, every marketing campaign ever. (Buy this toothpaste and your smile will look like hers! Buy this car, and your jawline will look like his!) The egregious part is the insinuation that if you buy these pants, you're not just purchasing denim, but a greater inclination toward self-love — both abstract and literal. Your sense of self is so fragile, ladies — so depleted — that denim can and will get you off.

And after the aforementioned umbrage, it’s boredom again. Wang’s other expectation — that his viewers will revert to their most primitive selves (“Me like sex”) — is so insultingly obvious that the photos become a type of familiar parody. You might as well give that model a big, fat foam finger to wear during her moment of sweaty self service.

Look — I get it. Sex sells, even sometimes to the very women who consider it a reductive sales tactic. I mean, not only did I click on this ad, I’m now writing about it. And I’m not the only one (see here and here). So when Wang told Women’s Wear Daily that his campaign “isn’t just provocative in terms of sexy, but provocative to provoke conversation,” I have to agree with the man. It’s both.

All I’m saying is that the conversation has gotten kind of old. I'm all for women embracing their sexualities on their own terms, but maybe we deserve an ad campaign that’s provocative, also, in terms of the product. Otherwise, your sexy-sell is less ooh-la-la, and more deja vu. In fact, it’s just another yawn-worthy gimmick — minus the dancing bears.

More like this
Most Comfortable Underwear For Big Butts
By Audrey Williams
We’ve All Had Bad Sex. Nona Willis Aronowitz Is Talking About It.
By Sophia Benoit
42 Black Owned Fashion & Beauty Brands To Support Today & Always
By Mekita Rivas, Shea Simmons, Kui Mwai and Dominique Norman
11 Graduation Guest Outfit Ideas To Wear To Someone Else’s Ceremony
By Phoebe Avison and Claire Fox
Get Even More From Bustle — Sign Up For The Newsletter