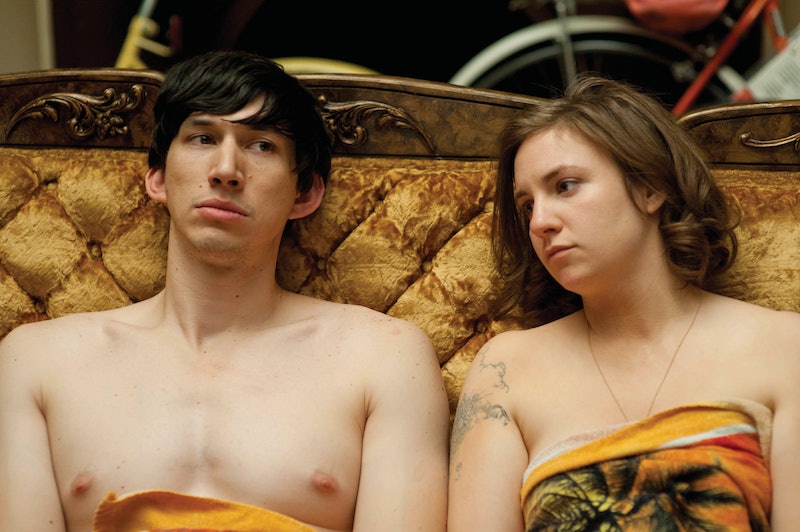 If you spent all of your teen years imagining sex as a passionate, transcendent melding of two souls (one of whom happened to be Robert Pattinson), you may have been shocked when you finally did the deed and found out that sex is gross. Oh, actually, wait, let me amend that: sex is really gross. Sure, it can still be a beautiful transcendent melding of two souls — but the kind of transcendent melding that incorporates stray bodily fluids, strange noises, and the occasional wayward butt crack hair. Also, it almost never involves Robert Pattinson. Why did everyone lie to you?!

Though most of us are embarrassed when our sex lives get gross, gross sex is actually the rule, not the exception. In fact, it turns out that sex is so inherently gross, we're hardwired to cope with it: A 2012 study in the scientific journal PLOS ONE found that sexually aroused women had a higher disgust threshold and were better at tolerating gross things (like, um, apparently drinking out of a cup that had a plastic bug inside it) than the unaroused women also studied.

Tossing aside the fact that drinking from a cup with a plastic bug inside it is definitely someone's fetish, that means a certain degree of grossness during sex is more than natural. You're simply taking part in the circle of gross life! So in the spirit of sexual grossiosity, we've collected 21 of the grossest things than can happen during the course of a totally regular sexual encounter. Queef on, you crazy diamond. (And before you read on, be sure to check out Bustle’s new podcast, I Want It That Way, which delves into the dirtiest parts of dating, and find more on our Soundcloud page.)

FINDING A TAMPON THAT YOU'VE FORGOTTEN ABOUT

As weird as you may feel about it, forgetting a tampon and then having sex is a very common problem. Not that you should make a habit of it, but if it happens — you are now part of the Sisterhood of the Forgotten Tampon. We meet twice a month in the back of the CVS. Remember to bring some snacks to share!

If your sex life involves a partner shooting semen into one or more of your holes, it usually comes out soon after. But sometimes... it doesn't. What happens during those times where semen begins leaking out hours later, while you're doing something totally different, like volunteering with orphans, or ordering the Taco Bell Holiday Taco Variety Pack? Did it get lost? Is it trying to get in on these tacos??

I once barfed during sex. It wasn't even oral sex. I was very drunk, having intercourse, and just suddenly, I knew that the jig was up, and the need to find a trash can became more important than anything else. I did not find the trash can in time. It was college.

GETTING CAUGHT WITH DIRTY UNDERPANTS

This applies both to having a partner see you in really busted underpants that are covered in period stains (because you didn't think you were getting laid tonight), and to having your partner get very into your really fancy underpants, which, upon closer inspection, turn out to be absolutely covered in weird crusty vaginal mucus.

Ugh, okay, sometimes it's an actual fart. It's not your fault! You didn't want to have lentils for dinner, but no one ever listens to you!! Maybe if it doesn't smell too weird, you can just pretend that it was a queef?

Sometimes by the time you get a whiff of your partner's crotch, you're just too deep into the game to say things like, "Oh, did you not take a shower after you came back from the gym? Could you, like, now?" Sometimes you decide to be a good sport and just plow through with a noseful of crotch stank. And that's the true meaning of love, people!

Even if you're into shaving your pubes, you're not going to do it every day; and thus, on occasion, you're going to find that you've basically given someone windburn while they were going down on you.

No matter how fastidious you are, sometimes, you go on a date to a restaurant that uses that really cheap, crumbly toilet paper. You usually don't realize that you've brought a piece of the restaurant home with you until it is much, much too late.

Listen: We all like to think of ourselves as totally on top of our period game, and able to predict the appearance of our special friend with crackerjack accuracy. But sometimes, we are oh so very wrong, and only find out after a romp that leaves you and your partner both looking like Carrie.

REALIZING A PET IS WATCHING YOU

Oh, God, the cat got in here? Does the person I'm with see it, too? Is it better to stop things, chase the cat out, and hope we regain momentum, or just to kind of pretend that I didn't see it? Oh God, is it coming closer???

HAVING A PET POKE YOU

This dog thinks I am attacking her owner with my vagina, and she is not too pleased about it!!

Once, when I was getting over a cold, I had a strong cough, but managed to find someone who still wanted to make out with me. I was already many minutes into full-on bangin', when I felt a cough coming on. I thought I could just cough a little without the guy noticing, and go on my merry way. But he did notice — because apparently, my cough tensed my vaginal muscles extremely hard, squeezing this dude's penis and putting him into excruciating pain. My vagina actually bruised his dick.

And the moral of the story is: Make sure to take vitamins and wash your hands during cold season, folks!

FINDING AN UNEXPECTED SOMETHING IN/ON YOUR PARTNER'S JUNK

Hemorrhoid? Genital wart? Deer tick? Weird lump that they should probably have checked out by a doctor? If it exists in all of human anatomy, you can find it in someone's junk. In fact, comedian Nikki Glaser of MTV's Nikki and Sara Live once had a partner find a small plastic cap inside her vagina while they were hooking up. I won't ruin the story and tell you how it got there, but trust me, you want to find out.

FINDING A PIECE OF HAIR STUCK IN YOUR CRACK

If you have long hair, pieces of it will inevitably get stuck in your butt crack while you shower. And sometimes, just when you think you've gotten them all and can finally relax, you feel something weird while you're having sex. And sometimes, just sometimes, this is because a hair has gotten lodged in your butt crack, the other end of it has gotten lodged in your vagina, and now you're going to have to stop this bonefest and pull it out.

HAVING SEXUAL FLUIDS LAND ON OTHER OBJECTS

That iPhone's never going to work quite right ever again, you know.

GETTING A CONDOM STUCK IN YOUR VAGINA OR BUTTHOLE

There was a lot going on last night! How were you supposed to keep track of what went where, or who took what out of what hole? You've got a lot on your mind, what with, you know, Christmas shopping and such!