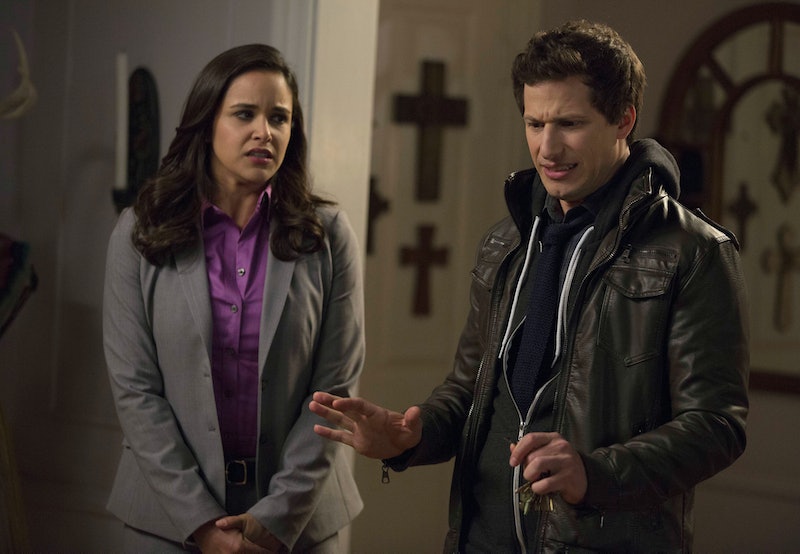 The stolen glances. The subtle looks. The jokes that only the other one gets. These are all the true signs of a will-they won't-they television relationship, and a dance that Jake and Amy on Brooklyn Nine Nine have been dancing since the very beginning. Right from the start of the show, the two of them had chemistry, whether it was in the field, back at the office, or at the bar. But Jake never did anything about it — and neither did Amy. After last week's episode, Amy broke up with her boyfriend Teddy and Jake learned about Amy's real feelings. It seems like a mess, and it might be the end of all their romantic couplings. Or, could this be the start of a real relationship between Jake and Amy on Brooklyn Nine-Nine?

Well, of course in true Jake fashion, he had to go and spill blue soda over everything during the car ride back to New York City. So, not so fast, 'shippers. Jake's main mechanism for defense is laughter — he has feelings, but then he quickly covers everything up with a joke. There's nothing wrong with always being that comic relief, but in this case, he's really got to, as Amy might say "man up," about his feelings.

While it's easy to assume this might be the first step in them actually become friends without any real romance attached, it's just the opposite. They might be complete opposites, but that's what makes them so great. Jake can do all these insane things, and Amy can reel him back in with her level head and Excel spreadsheets. Now that their mutual feelings are out on the table, could this finally be all systems go for these two?

Please please, let it be so. But, in all honestly I really do enjoy the slow burn of these two. It's so nice when a show doesn't rush right into the romance with characters, and so far Brooklyn Nine-Nine hasn't. I hope for the sake of the characters that that they don't jump right into bed — even though Gina and Boyle jumping into bed has been the best thing ever. That's not the route for Jake and Amy, though. They do care about each other, and their relationship needs to slowly bloom. And, it's one the show is very slowly setting up. The groundwork is there, we simply need to be patient.

I mean, look at the happy shocked face on this big goof when he learns of Amy's feelings for him:

So keep doing what you're doing, Nine-Nine. Keep this relationship slowly burning on one of Boyle's spare hot plates that he probably keeps in his desk in case of emergency.