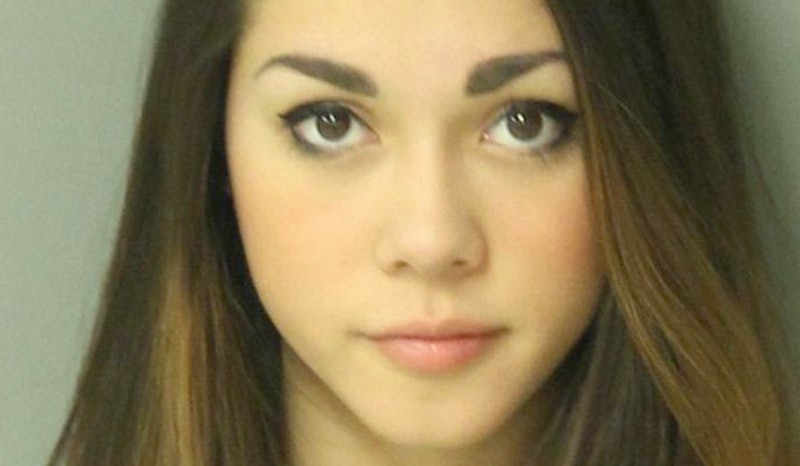 On the heels of the hot mug shots of Sean Kory and Jeremy Meeks, we now have 18-year-old Alysa Suguro Bathrick, a girl with a ridiculously hot mug shot. I, for one, am glad this happened. If hot mug shots are going to be a "thing" for 2014, then at least the ladies got one in under the wire. She now has thousands of admirers on Twitter, and I'm guessing a pretty strong chance at a modeling career, considering it takes the entire seasons of hour-long episodes to get smizing like that out of America's Next Top Model contestants. Everybody's wondering what her next move will be, but in the meantime, I can't stop staring at her eyebrows. Can part of her community service be to teach the Internet how get that kind of eyebrow game?!

This headshot, I mean mugshot was gifted upon the world when Bathrick surrendered herself to police at 7 a.m. on December 1, and was released by 11:30 a.m. I don't know what's more impressive, the fact that she managed to look this put together during a time where most of us haven't managed to crawl to the coffee machine, or that she could not give less of a crap about what you think. Look at those eyes — those are the eyes of a human being who would probably last until the last two episodes of Survivor. And, in her case, eyes that lasted through an arrest for carrying Xanax with intent to distribute.

We may not have invented them, but we are undeniably living in the generation that popularized, then abused, then employed "ironically," and then continued to abuse selfies. Half of it is the thrill of the chase; knowing you optimized the lighting, the angle, the expression on your face, and you managed to create something all on your own (or with the help of filters, whatever). But if you're looking to up your photo game, then take a few tips from this alleged Xanies-pusher, because I imagine that the circumstances around that are way more difficult to control.