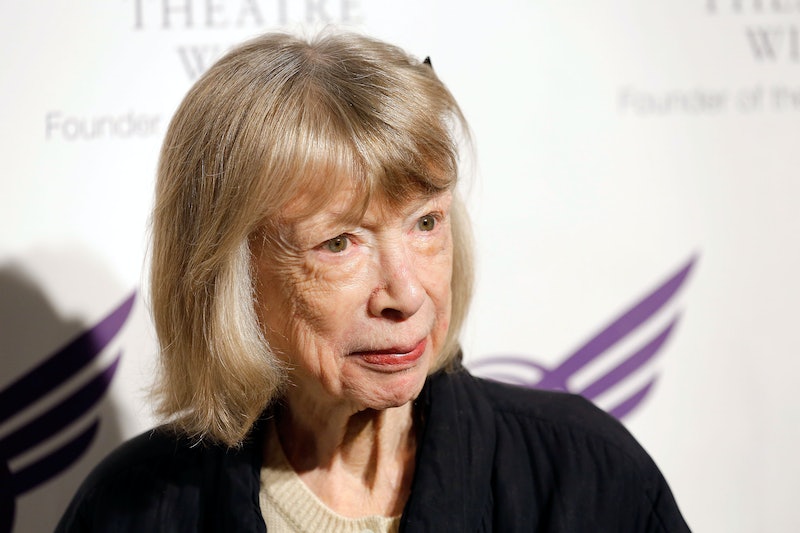 Novelist, essayist, journalist, and screenwriter Joan Didion turns 80 on Friday, and as one of the greatest American writers alive, it’s safe to say she’s an elder stateswoman of letters, a patron saint of writing, and a voice of her — and our — generation.

Didion was born on December 5, 1934 in Sacramento, California, and she got her start as a staff writer at Vogue right after she graduated from UC Berkeley. Her essay “Self-Respect: Its Source, Its Power,” from Slouching Toward Bethlehem, was first published in Vogue in 1961, and became a touchstone for women at the time. Her novels Play It As It Lays, A Book of Common Prayer, Democracy, and The Last Thing He Wanted were, and still are, celebrated. In 1970 Lore Segal at The New York Times wrote, “A new novel by Joan Didion is something of an event.” Four decades later, the novels might not be new, but reading them still feels like an event.

If, as Cheryl Strayed proclaimed a few months back, “Essayists who happen to be women are having a banner year,” then those essayists owe a lot to Joan Didion. Slouching Towards Bethlehem and The White Album blended journalistic observations and personal confessions — but she never got too personal, which is why her work resonates. Her writing has never been self-indulgent, even when it’s at its most intimate.

When Didion lost her husband, writer John Gregory Dunne, she channeled her grief into The Year of Magical Thinking, and the book became aPulitzer Prize finalist and the winner of a National Book Award. Not long after, she lost her daughter Quintana Roo, and Didion wrote Blue Nights in an effort to make some sense of that loss.

Didion’s nephew Griffin Dunne is making a documentary about her life and work since, strangely, no one has made a film celebrating one of our greatest living writers. So to celebrate Didion’s 80th birthday, here are seven reasons that reading her work will change you — for the better, of course.

She Perfected the Art of the Essay

Didion opened the doors for generations of female essayists. She was one of the few women pounding out prose right next to Hunter S. Thompson and Tom Wolfe, chronicling the times and offering up cultural critiques and observations about the Manson murders, the civil rights movement, and Vietnam. She was able to mix the personal and the political without veering into TMI territory. “Grammar is a piano I play by ear,” she once wrote. If you want to check out a master essayist, read her work.

One of Didion’s most quoted lines is, “We tell ourselves stories in order to live.” If you’re in need of a little reminder about why you write and what in the world you’re thinking trying to become an essayist or a poet, reading her work might just rekindle your passion. “I write entirely to find out what I'm thinking, what I'm looking at, what I see and what it means. What I want and what I fear.” She writes to live, and lives to write. If you have that same passion, then keep on writing.

There aren’t many writers who hate books and recoil at the thought of reading an essay. A love of reading is part of the package, and Didion expresses her love of reading beautifully, in ways that other book nerds can understand. “Another thing I need to do, when I'm near the end of the book, is sleep in the same room with it... Somehow the book doesn't leave you when you're asleep right next to it.” Yes. We feel you, Joan.

Didion faced two unimaginable tragedies in her later life — the loss of her husband and daughter, in quick succession. She dealt with that loss by doing what she does best — she wrote about it. “I know why we try to keep the dead alive: we try to keep them alive in order to keep them with us. I also know that if we are to live ourselves there comes a point at which we must relinquish the dead, let them go, keep them dead. ” She wrote that for herself, but also for anyone else who might be dealing with loss. She found strength in putting words on the page. And now they're there for us to read.

She’s All About Self-Respect

Her essay “Self-Respect: Its Source, Its Power” was way ahead of its time in the early 1960s, back when women still weren’t allowed to get a credit card in their own name and Leave It to Beaver was still on the air. “Character — the willingness to accept responsibility for one's own life — is the source from which self-respect springs,” she wrote, and the words still ring true today — even though Leave It To Beaver is over and we can get our own credit cards, thank you very much.

She’ll Teach You to Suck It Up

No matter what has happened in her life, Didion has never sought pity in her writing. She’s tiny but mighty, she’s tough, resilient, and strong. “Do not whine... Do not complain. Work harder. Spend more time alone.” If you’re ever feeling like you need to tweet about how life sucks or someone was mean to you that day, reread that quote. It’ll help.

She’ll Remind You to Appreciate the Moment

“I'm not telling you to make the world better, because I don't think that progress is necessarily part of the package. I'm just telling you to live in it. Not just to endure it, not just to suffer it, not just to pass through it, but to live in it. To look at it. To try to get the picture. To live recklessly. To take chances. To make your own work and take pride in it. To seize the moment. And if you ask me why you should bother to do that, I could tell you that the grave's a fine and private place, but none I think do there embrace. Nor do they sing there, or write, or argue, or see the tidal bore on the Amazon, or touch their children. And that's what there is to do and get it while you can and good luck at it.”

So in honor of Joan Didion, live recklessly and get it while you can.