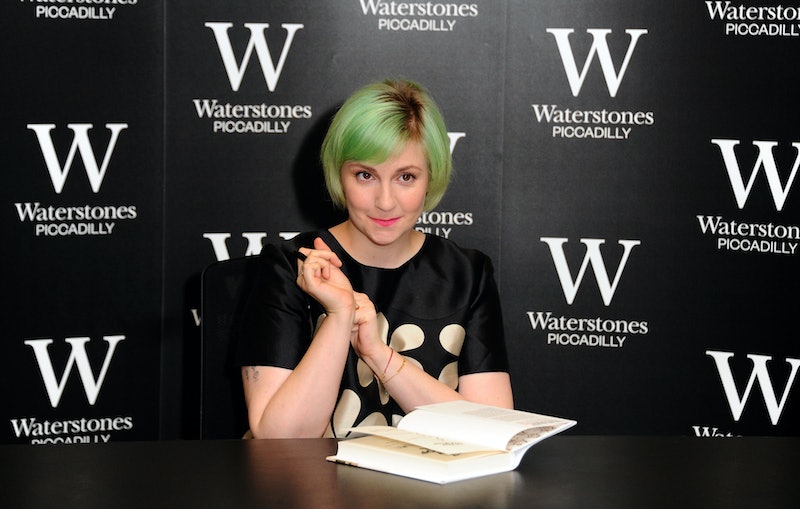 Some people may think the literary community consists of polite tea drinkers respectfully debating the merits of their favorite novels and epic poems, but as the last 12 months have shown... well,that's not exactly the case. In 2014, the books world saw its fair share of controversies.

No, it’s not like National Book Award finalists were breaking into MMA-style beat downs or anything, but heads did roll in the book world — metaphorically, of course. There was much ado about whether or not YA books are “for children,” for a start. Claws came out for that one. Harper Lee and Lena Dunham had some unpleasant battles to fight, and author Kathleen Hale gave the phrase “don’t read the comments” a whole new meaning. Are you starting to remember some of this stuff?

In the words of one of our greatest living philosophers, Miley Cyrus, “People like controversy because that's what sells.” Hopefully beautiful prose, moving stories, and unique voices sell as well, but, alas, a little controversy never hurts, and the world would be boring if everyone sipped chamomile tea with their pinkies in the air and agreed all the time.

As the year comes to a close, here’s a look at the seven book controversies that shook up 2014. There’s drama, intrigue, cyberstalking, corporate jousting, and treachery. Enjoy.

Anyone who has sent a tweet, written a blog post, or penned a book knows it’s best to avoid online trolls. Author Kathleen Hale knew that, too, but when her first novel, No One Else Can Have You, was published by HarperTeen, one particularly opinionated Goodreads blogger got under Hale’s skin.

The Guardian posted a piece by Hale called “Am I Being Catfished? An Author Confronts Her Number One Online Critic,” in which she admits to stalking a blogger who went by the name Blythe Harris, phoning “Harris” at work, showing up at her house, and calling her out on Twitter.

Writers like Anne Rice, comedian John Mulaney, and Robin Wasserman tweeted their support of Hale, while others accused her of narcissism, violating the privacy of online book bloggers, and engaging in some very bad behavior. Book bloggers were upset that a publisher would share a reviewer's address with an author, and Hale’s admission in The Guardian caused a firestorm of condemnation, fascination, and, in some cases, support.

Hale's controversy also opened up discussions about online trolls, privacy, and the often tricky relationship between authors and book bloggers.

Lena Dunham is no stranger to controversy. Her HBO show Girls has been criticized for its depictions of nudity, graphic sex, privilege, and for daring to think that a man as hot as Patrick Wilson could possibly be attracted to Hannah Horvath. Even so, her first book Not That Kind of Girl debuted this fall to strong reviews and even stronger sales.

Soon after its release, however, the conservative site National Review ran a piece called “Pathetic Privilege” by Kevin D. Williamson that accused Dunham of sexually molesting her younger sister Grace, based on a few passages in the book. In the wake of the accusations, Dunham disappeared from Twitter and issued a statement, saying, “If the situations described in my book have been painful or triggering for people to read, I am sorry, as that was never my intention. I am also aware that the comic use of the term 'sexual predator' was insensitive, and I’m sorry for that as well.”

Writers like Roxane Gay came out in support of Dunham, and the controversy soon died down. Dunham is back on Twitter, her book is still selling, and the new season of Girls will premiere next month — which should give Williamson and his ilk more anti-Dunham fodder to work with in the new year.

YA “is for children”

The release of the film version of The Fault in Our Stars this summer had fans lining up for tickets to see how their beloved book would fare on the big screen. All the excitement turned to protest when Ruth Graham’s Slate essay “Against YA” was published, in which she proclaimed: “Adults should feel embarrassed about reading literature written for children.” Those are fighting words — and the editors at Slate no doubt knew it would cause an impassioned backlash.

Authors and readers came out against the essay, declaring their love for books like Eleanor & Park, The Hunger Games, Divergent, Grasshopper Jungle — and the list goes on. Instead of making legions of adults embarrassed about reading YA, Graham’s piece did just the opposite: It made them love the genre even more. Graham’s essay proved one point: You don’t mess with the YA audience. They'll come back at you like Katniss.

On the corporate side, the battle between online retail behemoth Amazon and publishing house Hachette ignited its share of controversy in 2014. The Fault in Our Stars author John Green (who is not a Hachette author but whose book is an Amazon bestseller) said, “What's ultimately at stake is whether Amazon is going to be able to freely and permanently bully publishers into eventual nonexistence.”

The dispute was over ebook pricing and contract details for distributing Hachette titles, and Amazon was delaying delivery of Hachette titles, which didn’t earn the company much sympathy. It was about giant corporations like Amazon versus indie retailers, authors, and publishers — even though Hachette is one of the big five publishing houses.

There were petitions against Amazon, and petitions asking Hachette to reach a compromise. The two companies finally, at long last, reached a compromise this fall, signing a new multiyear contract, and bringing one of the nastiest publishing conflicts in recent years to an end.

Daniel Handler — aka Lemony Snicket — was doing such a bang-up job of hosting this year’s National Book Awards… until he wasn’t. He was funny, sharp, and entertaining, but after Jacqueline Woodson delivered a moving speech upon winning the prize for Young People’s Literature for her novel Brown Girl Dreaming, Handler reclaimed the podium and said: “I told Jackie she was gonna win, and I, uh, said that if she won, I would tell all of you something I learned about her this summer. Which is that Jackie Woodson is allergic to watermelon.” He also referred to the two black nominees in the poetry category as “probable cause.”

Handler later apologized, but the most meaningful response to his remarks came from Woodson herself, who wrote a New York Times op-ed called “The Pain of the Watermelon Joke,” in which she calls Handler out for his comments that night. “His historical context, unlike my own, came from a place of ignorance,” she wrote.

Harper Lee and The Mockingbird Next Door

The author of To Kill a Mockingbird is intensely private and has kept to herself for decades, but she came out of hiding in 2014 to dispute the biography by Marja Mills, The Mockingbird Next Door: My Life with Harper Lee.

Mills, a Chicago Tribune journalist, moved in next door to Lee and her sister Alice, a lawyer who handled Lee’s affairs for decades. But Lee, now an octogenarian who suffered a stroke in 2007, issued a letter stating: “Rest assured, as long as I am alive any book purporting to be with my cooperation is a falsehood.” Mills said that she had the blessing of both sisters, and Penguin Press stood by the book even when Lee issued her statement.

The Mockingbird Next Door got strong reviews, but Lee’s denunciation of the work will always make us wonder. After all these years, she’s still a mystery.

Just when we thought the year's book controversies were coming to a close, Ayelet Waldman stirred the pot one more time. The author was outraged that her novel Love and Treasure didn't make the New York Times Book Review's 100 Notable Books of 2014 list.Sure, there are plenty of writers out there who were disappointed that their books weren't picked, but Waldman took to Twitter to express her dissatisfaction, with (now deleted) tweets like: "I am really not dealing well with having failed to make the @nytimes notable book list. Love & Treasure is a f*cking great novel IISSM" and “I never complain about this sh*t, but there are MANY books on that notable list with reviews that were NOWHERE near as good as mine."

Yikes. Waldman later issued a statement on Facebook, saying, "I'm just going to hunker down and try to remember next time to think before I vent." Based on the negative reaction to her rant, that's probably a good plan. For all of us.

More like this
Man Meets Politics: ‘Boy Meets World’ Star Ben Savage Is Running For Congress
By Jake Viswanath
Amazon's Selling A Ton Of These Stylish Things With Fanatical Reviews
By Alexandra Elizabeth
Your Ultimate Guide To Aquarius Season
By Brittany Beringer
All The ’70s Easter Eggs You Missed In 'That ’90s Show'
By Grace Wehniainen
Get Even More From Bustle — Sign Up For The Newsletter
From hair trends to relationship advice, our daily newsletter has everything you need to sound like a person who’s on TikTok, even if you aren’t.