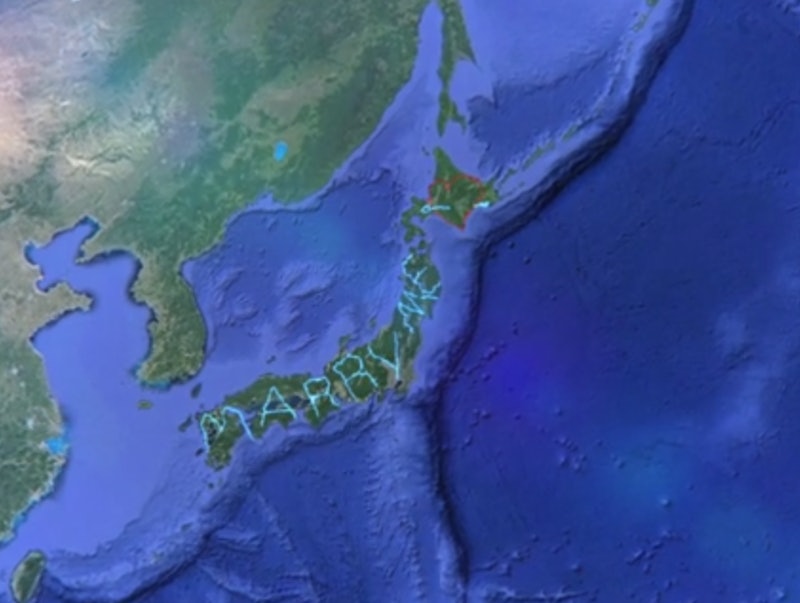 Nowadays, we're all familiar with elaborate, technologically assisted proposals, from elaborate videos, to full on song and dance numbers, to taking over a national talk show, but it seems that we have still not yet hit the limit of how over-the-top a marriage proposal can be. Case and point: the Japanese GPS artist Yassan who proposed to his girlfriend by spelling out a GPS message across the nation of Japan. Because nothing says big gesture by turning the entire country into the canvas for the big question.

Yassan, real name Yasushi Takahashi, spent six months hiking across Japan, covering a total of over 4,000 miles, in order to properly spell out his message. In the end, a GPS trace of his movements spells out the words "Marry Me" in English (I'm guessing the Japanese characters might have been too intricate to finish in a reasonable amount of time?) across three of the main islands of Japan. A heart with an arrow through it is drawn across the northern most island of Hokkaido.

The Guinness Book of World records declared the proposal to be the largest GPS drawing to date after Yassan finished back in 2008, and recently became the subject of a Dutch documentary. Oh, and his girlfriend also said yes.

Now, personally, I'm not a huge fan of the grand, dramatic proposal, and not just because they don't always go particularly well. They also put people (almost always women) on the spot, and they ensure that the moment then becomes about spectacle rather than the couple's actual relationship.

And in this case, all of that is dialed way, way up considering this guy actually quit his job to spend six months walking across the country, spelling out a proposal message and presumably not seeing the woman he wants to marry very much during that time. If ever there was a classic case of the relationship taking a backseat to the spectacle of the proposal, this would have to be it.

But hey, she said yes, so I guess it's the sort of thing she appreciates? In which case, good for her for finding a compatible guy, but I know that if my boyfriend went MIA for six months without explaining why and then proposed I would just be like "Are you out of your mind?"

Anyway, you can check out the Dutch documentary, as well as the video Yassan himself made of the experience, below and make up your own minds.