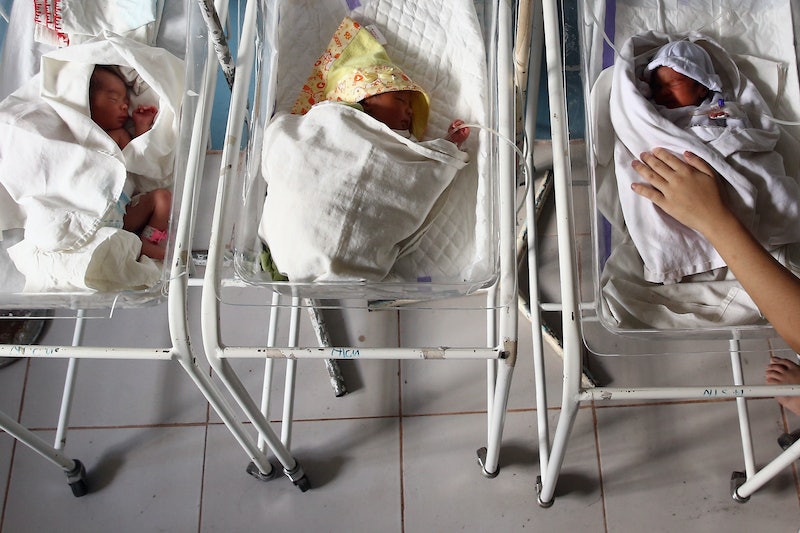 There are some really weird names out there in the world — New Zealand in particular seems to be fond of giving kids ridiculous names like "Number 16 Bus Shelter" and "Talula Does the Hula From Hawaii." But even knowing all this, it's still rather surprising the number of parents right here in the good old U S of A who have named their children Abcde. As in the first five letters of the English alphabet. As their name.

Now, if this were just a one-time, outlier kind of name — like for instance Number 16 Bus Shelter — it wouldn't be all that odd, really, but it turns out that Abcde is actually a name that's been given to literally hundreds of children in recent years. According to an investigation by Vocativ, there are 328 instances of people naming their baby Abcde. And since the earliest instance they can find only goes back as far as 1990, that means that this is a name that's been bestowed on roughly 23 babies a year ever since.

And as relatively tame as this name is by weird name standards, I'm still having a hard time wrapping my head around the fact that 23 sets of parents decide to give their kids this name every year. I mean, it's a name that people don't even know how to pronounce — though apparently the correct pronunciation is “AB-si-dee.”

Which is better than if you just spelled it I guess.

Well, at least it's presumably not a name that gets them too much teasing on the playground? I mean, it's a little out there, but Americans are fond of all sorts of other weird names, too. Even though the most popular names tend to stay fairly traditional, the past few years have also seen the rise of Game of Thrones inspired names like Arya and Khaleesi. And other film inspired names like Katniss and Django aren't uncommon either. Plus at least one person in 2014 named their daughter Sephora. So there's that.

Hopefully the little Abcde's of the world will have classmates with even more unusual names. And hey, once the've mastered the ABCs, they'll at least have a head start when learning how to spell their name.