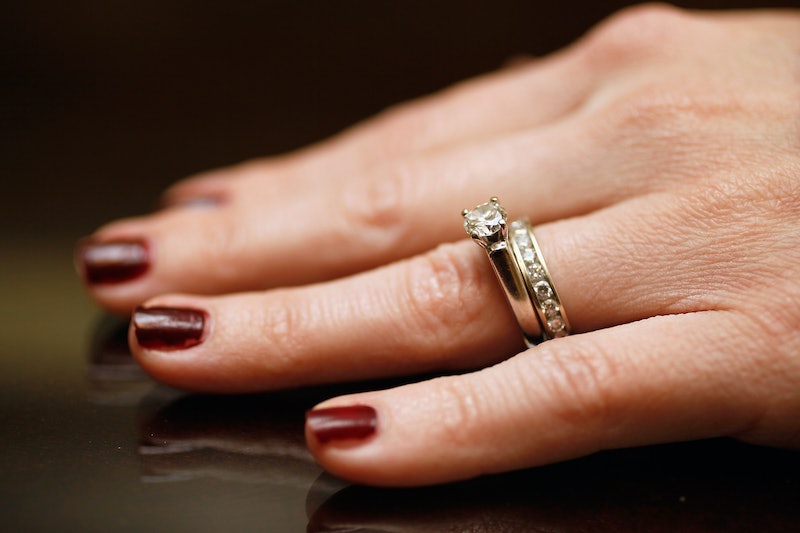 There are a lot of really terrible reasons to get married; being the winning contestant on a reality television show, for example. But Psychology Today, bless their scientific minds, have listed for us some of the worst and most common reasons people decide to get hitched. This is timely, as evidently the holidays make people want to celebrate their love by committing to holy matrimony. But maybe you should delay planning the wedding when you aren't drunk on eggnog and holiday cheer.

Proposals spike in December. People have that end-of-year wide eyed expectation for new beginnings that come with the impending new year, and that hope and promise often manifests itself in life changing commitments. “I’m going to lose 20 pounds!” is probably unreasonable but will at least score you some time in a gym, assuming you don’t already have a membership. “I’m going to quit smoking!” is also cool for you and anyone around you. “I’m going to commit myself for the rest of my waking days to another human being, forever.” is, depending on your personal regard for the sanctity of legal union, semi-permanent. You can cancel your gym membership; you can’t cancel your marriage.

Here are three of the eight times Dr. Andrea Bonior, author of the article, suggests you hold off on your vows: Head over to Psychology today for the whole scoop.

1. You were proposed to publicly

The actual example provided, much to my own amusement, was proposals via jumbotron. Unless your relationship is so grounded in sports culture that you cannot imagine your future together without it — which is arguably its own reason not to jump the gun — not wanting to turn down a public proposal is a terrible reason to commit to another person for the entirety of your lifetime. Why might someone say yes simply because her significant other asked her in front of a stadium of onlookers? Because if you don’t, you look like an asshole. The bigger jerk in this situation is the person who’s baiting you into a wedding with the shame of 10,000 people boo-ing your decision not to. Also, it’s cliche.

2. You’re afraid you’ll lose your partner if you don’t get married

Do not do this. I repeat: Do not do this. Adding commitment to a flailing relationship is a half-baked idea formulated out of desperation. Lock it in with someone who’s willing to stick around.

3. Your family keeps asking after your personal life

You are an adult now. This is not a reason to shackle yourself to another human being.

Reasons you should get married

You both love pizza.