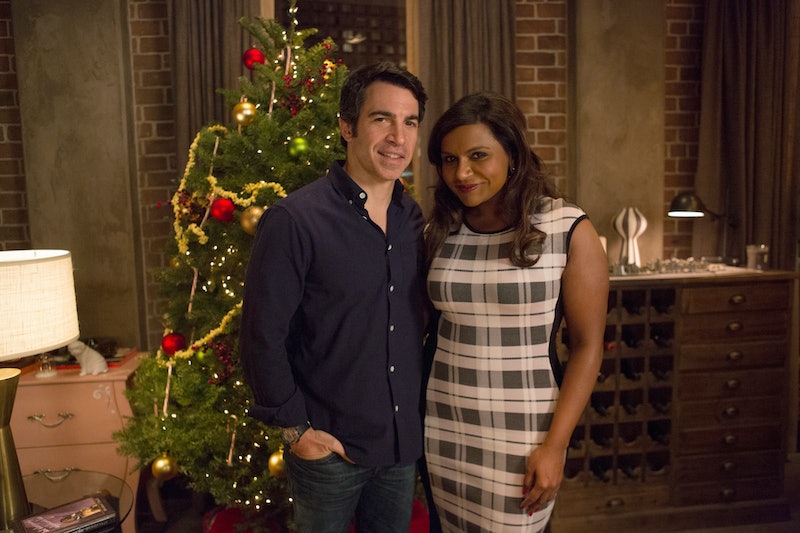 There are few TV couples I love more than I love The Mindy Project's Mindy Lahiri and Danny Castellano. They were one of those couples that were obviously going to be a couple from the first episode, and but that didn't make me any less thrilled when they finally got together. And although their coming together definitely wasn't without its complications, Mindy and Danny's relationship is actually a pretty solid one. Obviously, that means it's time for the next step: A possible proposal in this Tuesday's new episode. But is it the right time for this relatively new couple to start talking about marriage? Even though they're totally adorable together, should Mindy and Danny get engaged?

There are a lot of reasons why they shouldn't. They haven't been dating that long — roughly 10 episodes, although it's slightly longer in the Mindy Project universe. Plus, isn't half the fun of the Mindy Project watching Mindy's various dating disasters happen? And then there's the fact that this would be her second engagement. This time around, I'd like to think she'd put a little more time into making the decision, especially since the stakes are higher with Danny. After all, if it doesn't work out this time, she'd still have to face him every day at work. And that would suck.

But despite the fact that the odds may be against them, I still think a Danny and Mindy engagement is an awesome idea.

Danny naturally takes himself — and everything else — very seriously. Mindy takes nothing seriously, and because of that, they totally balance each other out. Danny's good at bringing Mindy back down to earth, and Mindy can appeal to Danny's sense of adventure the few times it actually makes an appearance. All good relationships need this kind of give and take.

Their Engagement & Wedding Would Be So Much Fun

As much as I'll miss seeing Mindy's string of good-looking boyfriends who couldn't be more poorly suited to her, an engagement brings the possibility of even more hilarious scenes. When she was engaged to Casey, she wasn't excited the way I'd expect her to be — probably because she didn't see their marriage actually working out. I think it'd be different with Danny, and her excitement would lend itself to a lot of good material. Can you imagine Mindy trying to plan a wedding with Danny's mom attempting to take over every single aspect? What if Annette tried to pass down her (presumably hideous) wedding dress to Mindy, and she had to find a way to tactfully decline? And I would love to see Danny show up to her bachelorette party as the stripper, because that's something he'd definitely pull.

Oh, Diamond Dan. You are irresistible.

Mindy Has Always Wanted To Get Married

Since the pilot episode, Mindy has talked about her dream of getting married. I want to see her get it. It would be sitcom formula to hold Mindy and Danny's happy ending until the series finale (which I hope never comes) but I would love to see them explore married life together.

Because if they didn't, Mindy wouldn't spend so much time trying to get Danny's mom to like her. Even though her friend Dot is comedy gold.

More like this
You’ll Most Definitely Recognise Kyle Pryor’s Soap Star Girlfriend
By Sophie McEvoy
Mollie King & Stuart Broad Just Shared The First Pic Of Their Baby
By Sophie McEvoy
Theo James Revealed The Truth About His 'White Lotus' Nude Scene & Fans Can't Cope
By Stephanie Topacio Long
The 'Kenan & Kel' Reunion On 'SNL' Took A Dramatic Turn, Thanks To Keke Palmer
By Brad Witter
Get Even More From Bustle — Sign Up For The Newsletter