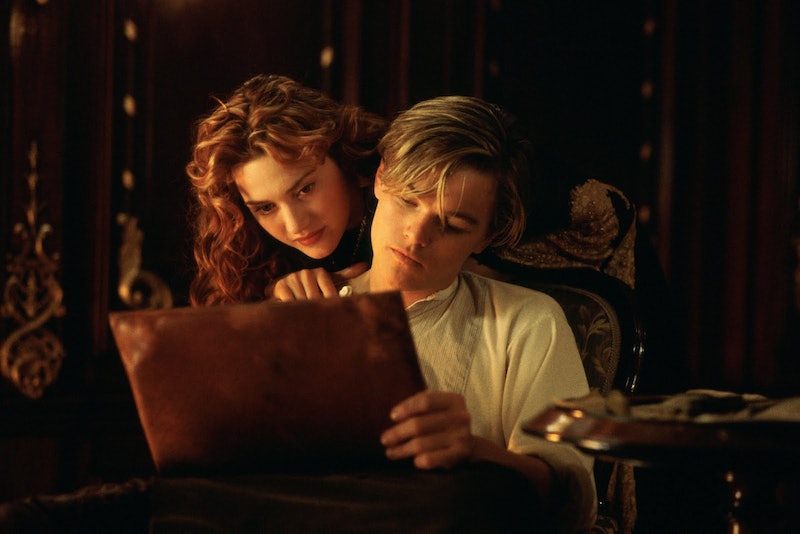 Sometimes, it feels like the exact qualities that make you find a particular man attractive (if men are your jam, that is) are a total mystery. I mean, sure, everyone enjoys looking at a regulation hottie — but when we find someone truly attractive, there's more at play than nice abs and a truly on fleek facial hair sitch. Why did you develop a brain-liquifying crush on one totally regular-looking guy at work, and not this other totally regular-looking guy at work? What makes you find one CW star hot, and another CW star who looks almost exactly the same as the first guy kind of repulsive? Sometimes, the factors that fuel our attractions feel so complex, they are nearly indescribable. But, other times, it's not so complicated: Sometimes, a guy is attractive simply because of what he's holding.

Yes, in this world, there is an elite collection of beings and objects that simply make the person holding them seem cooler, cuter, smarter, and more sensitive, merely by having said objects in their hands. These objects allow us to look deep into the soul of a handsome stranger on the street, truly understanding his emotions, mindset, and capacity for commitment ... or just make up a fantasy life where we are banging the cute dad with the Baby Bjorn.Either way, it is of essential importance that we all get a handle on these 13 ovary-exploding items (mostly illustrated by Ryan Gosling), lest we fall under their thrall without even realizing it.

Why: Having a pet is a sign that you're responsible enough to help a sentient creature with its eating and pooping needs — and really, doesn't that cover nine-tenths of the qualities you need in order to have a healthy romantic relationship right there?

What You Think: "It's cool that his life is so stable, he's introducing tiny, helpless creatures into it. Plus, look at that bandana he tied around its neck! Our guest room will look fantastic."

Why: Someone has seen fit to mate with this individual, or at the very least, trust him with their baby and Baby Bjorn. If that's not a vote of confidence in their character, what is?

What You Think: "He must be sensitive, and very secure in his masculinity to be hanging around with baby spit up all over his shoulder at Starbucks. I bet I'd be a really great stepmom. I could just teach that kid all about Truffaut, and then leave yelling at her about horrible boring kid stuff to her real mom. Whoa, did I just come up with an amazing life plan?"

Why: Everyone wants very nice food cooked for them. I mean, duh.

What You Think: "I do not know what the hell that cooking implement is, which means that he would cook me delicious meals with it; delicious meals far beyond what I am able to cook for myself, for the rest of our days together. Also, maybe he will eventually get his own reality TV show where he tells funny, off-color stories about his life working in kitchens. Ooh, I wonder if he has a tattoo of a radish on his bicep?"

Why: Due to a 60+ year plus viral marketing campaign called "rock music," we associate the guitar with virility, creativity, and daring leather-based sartorial choices.

What You Think: "He's sensitive! He's expressive! We could form a band and tour the world, like the White Stripes!"

Why: Due to a decade-long viral marketing campaign called "Zooey Deschanel," we associate the ukulele with quirkiness, off-beat interests, and sensitivity.

What You Think: "He's sensitive! He's expressive! We could form a band and tour the world, like that extremely twee two-person band from the Hyundai commercials!"

Why: He cares not for society's bourgeois standards of what men "can" and "can't" do! He'll knit on the train if he feels like it, and then he'll come home and make highly-sensitive love to you on a kitchen table, if you feel like it.

What You Think: "He'll teach our children that gender norms only exist to hold them back! He will weep openly when our daughter wins the local basketball championship, and again when our son bakes an exceedingly moist angel food cake. We'll be one of those households that buck the statistics, and divide the housework perfectly evenly between us. We will cry at the end of Love, Actually together every Christmas."

Why: Walking around carrying art supplies, rather than just walking around playing some kind of cartoon game on your phone, sets you apart as a creative soul out of step with the more soul-draining parts of our modern world.

What You Think: "He'll see beauty in things that no one else sees, like a crumpled napkin, or a smoggy sunset, or the way that I forgot to do the dishes after we had enchiladas like four days ago. He's way beyond that kind of inside-the-box thinking."

Why: Much like art supplies, guys who still use tools show that they're also out of step with the more soul-draining aspects of our modern world. But also, they show that he'd be pretty handy in a zombie apocalypse, in the event that you're concerned about that kind of thing.

What You Think: "He's creative, but practical. Not trying to get ahead of myself here, but maybe he'll build us a house and we'll have passionate sexual relations following a hard rain."

Why: Young men who choose to spend their free time helping the elderly are either caring, thoughtful individuals who think that we can learn a lot from older people's rich life experiences, or are just trying to steal their pills. Luckily, those two types of guys are pretty easy to tell apart, especially after one of them starts trying to sell you some stray Cialis.

What You Think: "We are definitely going to die at the same exact second while holding hands in bed on my 100th birthday, after 70 successful years of marriage, immediately after having sweet and respectful old person sex."

Why: Walking down the street hefting a piece of furniture is a display of physical prowess, a sign that you're tough enough to handle difficult tasks on your own instead of paying others to handle them for you, and also a really convenient way to give women who don't know you a sense of your decorating skills. Why, excuse me, sir, is that couch made from genuine suede?

What You Think: "That couch is definitely genuine suede. And totally spotless. So there's no way he's taking home a couch he found behind a dumpster. He's just a man who knows what he wants, in life and in interior design, and makes sure to go out and get it. Man, when was the last time I dated a guy who had a couch that he didn't find behind a dumpster?"

Why: He's got an artistic vision that goes far beyond taking cameraphone pics of funny typos and slapping them up on Instagram.

What You Think: "He's into design and art; he understands the interplay of light, and shadow; and thus, he'll take way more flattering pictures of me than any iPhone ever could. I've definitely had relationships based on less!"

Why: Common interests form the core of any healthy, supportive relationship — and what interests you more than pizza, honestly?

Why: Who even gives anyone flowers any more? Only the sweetest, most considerate of souls, or people who have screwed up so badly, they're pulling out all the last-ditch stops in an attempt to apologize to their partner for what happened during their "guys weekend" in Tampa. I like those odds!