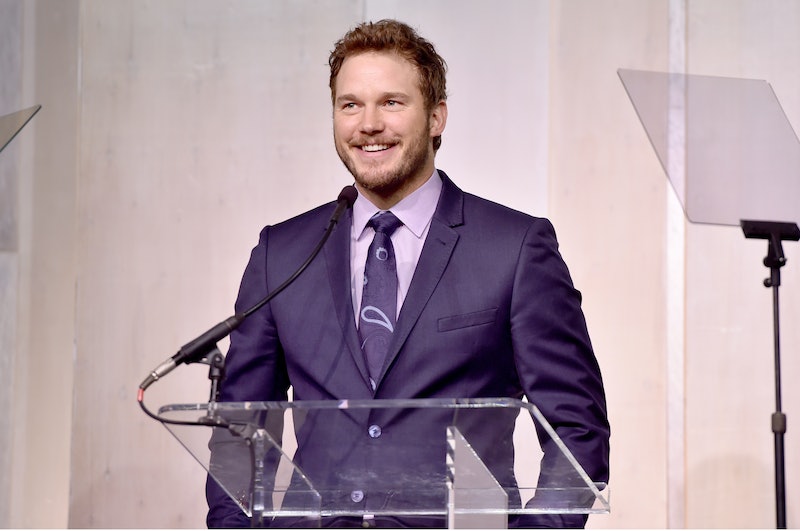 Are you siting down? Because Chris Pratt gave a speech about his prematurely born son, Jack, at March of Dimes' Celebration of Babies on Friday that will melt your heart into a pile of goo. Although Star-Lord probably wouldn't appreciate that imagery — though maybe he would since he's pretty sentimental — Pratt's touching story about being afraid of losing his son, who was born nine weeks early, is one for the record books. "I made promises in that moment about what kind of dad I wanted to be and I just prayed that he’d live long enough that I could keep them," Pratt admitted of his time holding his son in the NICU during Jack's one-month stay. "I’ve done all kinds of cool things as an actor — I’ve jumped out of helicopters and done some daring stunts and played baseball in a professional stadium, but none of it means anything compared to being somebody’s daddy."

These days, Jack is happy and healthy and no longer a "helpless little squirt," which we saw documented in their ridiculously adorable Thanksgiving photo. This was far from Pratt's first real-life superhero moment, though — both before and after Jack's birth, the actor has been changing lives and making people around the world laugh during tough times. Let's celebrate Pratt with four times he felt like a real Star-Lord.

When He Dressed Up as Star-Lord at a Children's Hospital

Pratt surprised kids at the Children's Hospital of LA with a screening of Guardians of the Galaxy, which would have been sweet on its own. But he also came dressed in character and let a young boy try on the costume, which made it even better.

When He Surprised More Young Fans at a Charity Screening

This time around, there were high-fives and selfies exchanged at a charity screening of GoTG , and Pratt said he wants to be a "positive role model for these youngsters." His advice to the kids? "If you stick to your path, if you believe in yourself and you be courageous enough to be yourself, you can grow up and be your own Star-Lord."

When He Threw Out the Worst-Best First Pitch

Although this isn't as touching as surprising children, watching Pratt flub a first pitch and adorably shake it off inspires us all. We are all Chris Pratt throwing a bad first pitch.

When His Ice Bucket Challenge Was Flawless

Not only did Pratt do the ALS Ice Bucket Challenge, but he used multiple bottles of alcohol and got totally soaked by his wife, Anna Faris, during it. It spread the word about helping aid ALS and also made everyone laugh.

More like this
Letitia Wright's Aisha Encourages A Vital Conversation Around Immigration
By Maxine Harrison
You Definitely Know The Voice Of Shuri's AI In 'Black Panther: Wakanda Forever'
By Brad Witter
Keke Palmer Finally Showed Angela Bassett Her Famous Impression Of Her
By Stephanie Topacio Long
Jodie Turner-Smith & Joshua Jackson's Relationship Timeline Includes Her Proposing
By Jake Viswanath
Get Even More From Bustle — Sign Up For The Newsletter