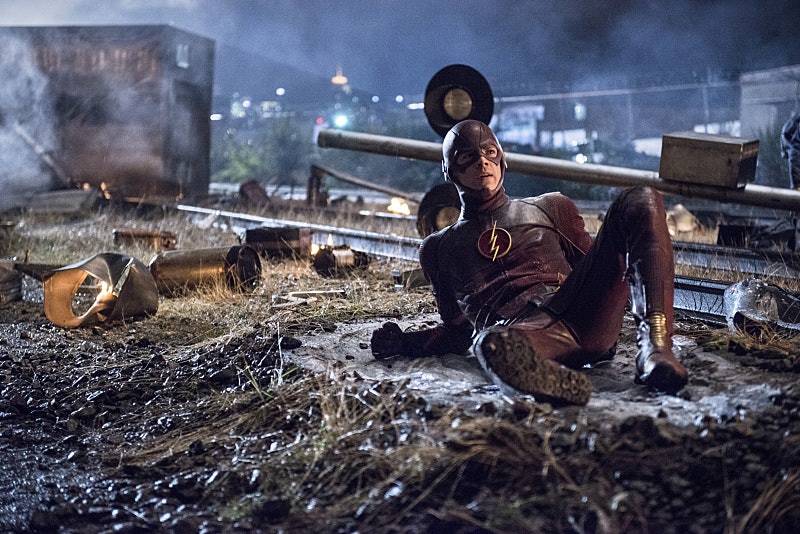 The CW's Arrow may have the ever-changing League of Assassins, but thanks to a particle accelerator explosion, The Flash provides us with a new metahuman each week. I believe the only exception is the "Captain Cold" episode. That villain did not have super powers, just a super powerful piece of technology. Most of the metahuman powers have something to do with the character's backstory, adding a sort of fated or ironic twist to how the dark matter "gifted" them with these abilities. Even more fun is Cisco's code names, which of course happen to match the original DC Comics names for these characters. I'm glad that the Arrow crossover event called them out on giving cute names to their foes, especially when Barry threw it right back at Oliver Queen by suggesting they discuss their concerns "over coffee with Deathstroke and The Huntress." So, exactly how many metahumans have we seen on The Flash ? Let's recap as we get ready for the midseason finale this Tuesday night.

I'm only talking about the show itself. This does not include Nathan Bliss, a ringmaster by the name of Mr. Bliss, who appears in the "Season Zero" comic book series, as well as Joey Rose and Rajeet. Here are the metahumans we've seen so far, and some possible new ones that could be revealed any day now!

Of course, we have to include Barry. He was struck by lightning in his lab during the storm and obtained the power of speed, healing, and reflexes.

He appeared in the pilot, and can manipulate the weather. He used his powers to rob banks.

The "multiple man" could make copies of himself — but could only control them through his "prime" body. He had been a geneticist who was working on cloning. Be careful what you wish for, I guess.

Kyle Nimbus, aka "The Mist"

This creep can turn himself into toxic gas and set out to exact his revenge on the crime families who had wronged him over the years.

The bomb specialist had the power to make anything she touched combust. She's the first female character we've seen with powers, and unfortunately died.

As luck would have it, Barry Allen's childhood bully got the power to turn into steel at will.

He was just watching the particle accelerator with his friends, when the storm hit the electrical tower he had climbed. He now has the power of electrokinesis. He can also absorb Barry's powers, which Harrison Wells found interesting and wanted to study.

Bivolo was another bank robber who used his powers of emotional control to create chaos while he went about his business. Even Barry fell under his "spell," leading to a confrontation with The Arrow.

Caitlin Snow's fiancé, who she believed to have died in the particle accelerator when it went boom, appeared in the teaser of "Flash vs. Arrow" as a fiery metahuman. I can't wait to see more!

Caitlin Snow, Cisco Ramon, and Eddie Thawne could all become metahumans at some point. Who even knows about Harrison Wells ever. We know the mysterious murderer of Barry's Mom is a metahuman, That's one, and two if the murderer is not Reverse-Flash. I'm sure even more metahumans will be revealed in the midseason finale, "The Man In The Yellow Suit."