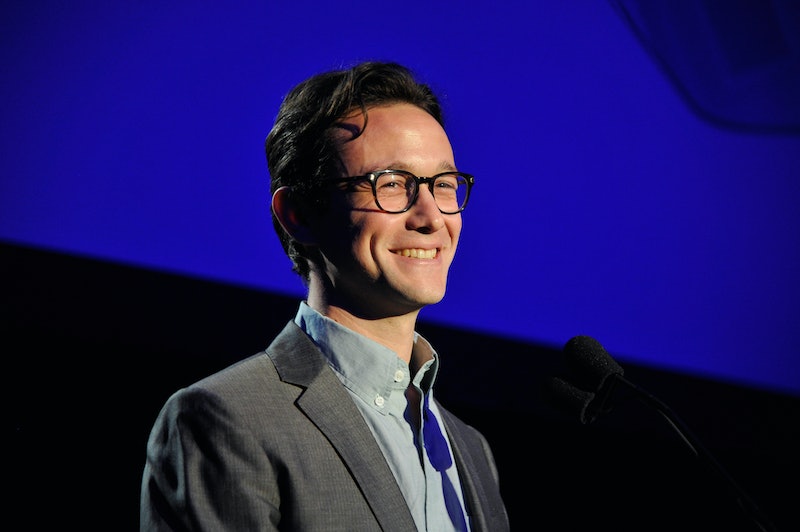 The first trailer for Robert Zemeckis' The Walk starring Joseph Gordon-Levitt has just been released, and the high-wire caper will give you vertigo for more than one reason. The film takes us back to 1974 on top of the World Trade Center where an aerialist decides to go for the greatest feat the world has ever seen — to walk suspended between the Twin Towers on a tight rope. The 110-stories-high spectactle is based on a true story. Levitt plays Philippe Petit, the French artist who snuck into the World Trade Center with a group of friends and strung a wire across the towers in secret. However, in the clip we only see Levitt balancing himself atop the once-architectural majesties. As the trailer begins, the shot pans up the 1,368 feet of the structures and it's hard not to think about 9/11. It's hard not to be struck with the sudden reminder that, "this is how far they fell."

What's even more unnerving is that that film is going to be shown in IMAX 3-D. It will give movie-goers the actual feeling of standing on top of the now-fallen World Trade Center and I wonder if that might still be too much for many to handle. Though the film portrays the buildings in such sweeping grandeur, celebrating their significance in New York's history...it's still a lot to take in.

But then, we are met with Levitt as Philippe Petit and are reminded that this is about a triumph rather than a tragedy. There is wonder and excitement in his eyes and suddenly, I am reminded that The Walk is as much about the Twin Towers as it is about the story of the man who dared to walk so high above New York City. According to Zemeckis, "It’s the story of an artist who risks his life to create a performance.” It's hard to remember that, but I do have faith in Zemeckis, whose past films like Cast Away, Forrest Gump, and Back to the Future balance humor, action, adventure, and tragedy. His films, though epic in scale, feel intimate in detail and character. With Joseph Gordon-Levitt at the center of the film, it's hard to imagine Petit would be portrayed without a lot of heart and weight.

It's going to take a lot for The Walk to take audiences beyond 9/11 — not that we can't make art about the World Trade Center or not be able to touch the time before 2001. The fact of the matter is, it's still an incredibly sensitive subject that's not going to leave our collective consciousness for some time, if ever. But there could be something thrilling about stepping into the shoes of Petit and seeing the Twin Towers again through his eyes, it just has to be done perfectly in order to pull it off. It's a cinematic risk as huge as the walk itself.