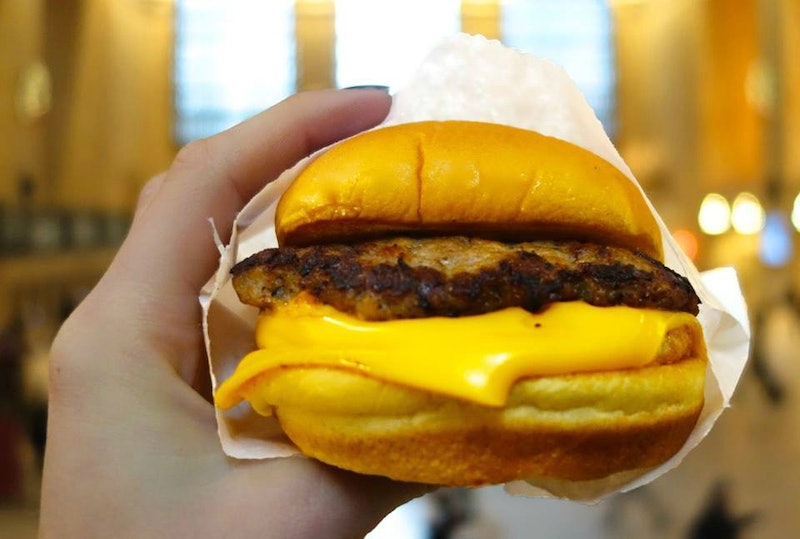 We’ve known for a while that if you play your cards right, you can snag breakfast sandwiches from Shake Shack at New York’s JFK Airport. In case you’re not planning on flying anytime soon, though, good news — Shake Shack breakfast sandwiches have arrived at the chain’s Grand Central Terminal location, so now you only have to get yourself over to the east 40s. Commuters, rejoice; you'll always be in the right place at the right time to enjoy these goodies. Hoorah!

There’s a catch, of course; they’re only available from 7 AM to 10:30 AM on weekdays. But as long as you manage to make it there during that too-brief time frame, you’ll be able to sink your teeth into a Sausage, Egg N’ Cheese or Bacon Egg N’ Cheese for $4.75, or a plain Egg N’ Cheese for $3.75. According to the Shack’s blog, the sandwiches consist of “griddled-fresh cage-free eggs from Niman Ranch, served with American cheese on a toasted potato bun.” The sausage version also incorporates “all-natural Shack pork sausage,” while its bacon-y counterpart includes applewood smoked bacon. And if you need a little caffeine to wash down your egg-tastic goodies, the Shack will also have a custom Stumptown coffee blend on hand. Is anybody else drooling yet? Because I’m starting to get a little drippy over here.

Alas, I never managed to get my hands on one of the JFK sandwiches before I moved out of the city (and I was only 20 minutes from the airport, too!); Do or Dine’s Justin Warner, however, treated us to a description of them on Twitter back in May. According to Gothamist, he described the crust on the sausage as “perfect” and “gently sweet”; he was also convinced that there was “magic” involved in their creation. Also, fun fact: According to NYCTastes, breakfast actually was on the menu when the original Madison Square Park location opened in the early 2000s. I’m not sure when it went away, but hey, at least we’ve got some options for it again, right? NYCTastes also suggested that it might be possible to ask for a burger topped with an egg during the breakfast hours, although whether or not the Shake will actually adhere to the request remains to be seen.

Speaking of Madison Square Park, that location has officially been gutted as of November 24. Here's what it looks like right now:

Don’t worry, though — it’s not going away for good. It’s just getting a pretty hefty remodeling, which will hopefully make it bigger and therefore keep the lines down when it reopens in about five months. Besides, it’s freezing out. Were you really planning on waiting in line for a custard or Concrete right now? Save it for the warmer weather — it'll be a much more pleasant experience.