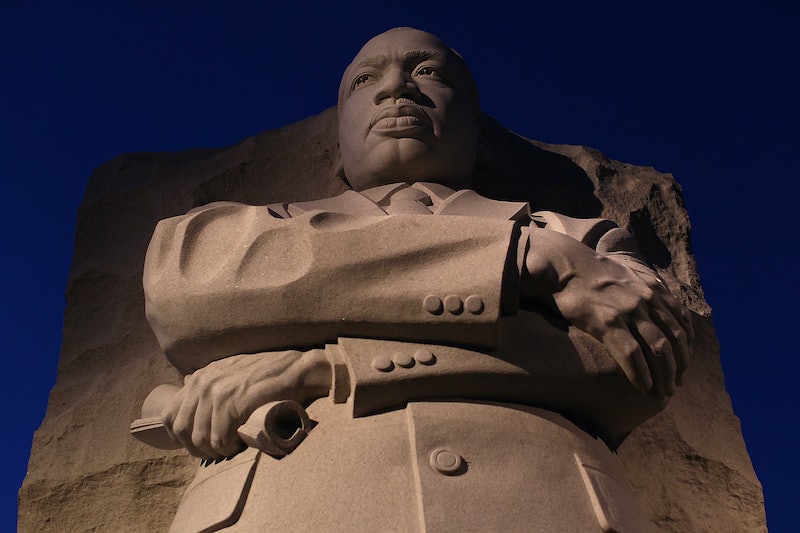 For the past few weeks, my Twitter, Facebook, Tumblr, and even Instagram and Snapchat feeds have been full of friends reacting to the deaths of Mike Brown, Eric Garner, and Tamir Rice, and the non-indictments of the people who killed them. Whether people are writing about their experiences with police, expressing their fears for themselves and their loved ones, or posting pictures and videos from the protests they're attending, people all around me are speaking up about what’s going on. And amid all those posts vocally condemning racism in America are the social media feeds of other friends who somehow don't have a single thing to say about any of the shootings or grand jury decisions. If you looked on their pages, you wouldn’t know that the US has a racism and police brutality problem that's currently coming to a head.

To quote Desmond Tutu, “If you are neutral in situations of injustice, you have chosen the side of the oppressor.” Police officers are killing black people and not even getting indicted and somehow you have nothing to say? The silence is deafening.

But perhaps this radio silence is preferable to the ignorance I saw when a Facebook "friend" posted the below image last week. The top image is of Martin Luther King, Jr. in a suit, marching arm in arm with other protestors. The two pictures beneath it are of black people with their backs turned to the camera. It’s not clear where they are or what they’re doing, but they're gathered around cars, some standing on a minivan, and some of them are wearing undershirts and sagging their pants.

I immediately had several problems with this image, but my instinct is to do what I always do when I come across something racist and ignorant online: not engage, simply block and move on. While I don't shy away from conversations about race and oppression, I find that online discussions are pretty useless, and they've only lead me to endless frustration. But for some reason (that reason being anger), I broke my own rule and commented: “And yet, MLK was still shot and killed by a white man.” The following discussion solidified my stance on not engaging in online arguments.

This image is the only thing this particular friend had posted that even suggests she's aware of the ongoing protests around the country and the deaths and non-indictments that led to them. For her to break her silence only to post this image, without comment, seemed so insincere. It was also a prime example of how Martin Luther King, Jr is so often used to defend racism.

You cannot remain silent about what is currently happening in the United States and then think that you would have supported Martin Luther King, Jr. Like I told this woman during our discussion, it’s easy to think you would have been on the right side of history when you look back on it, but your actions and comments during the important moments of your generation are a more accurate indicator. If you want to really know who you would have supported during the Civil Rights Movement, ask yourself who you're supporting now.

If you want to really know who you would have supported during the Civil Rights Movement, ask yourself who you're supporting now.

I’m very sure there were people in Martin Luther King Jr.’s generation who preferred the more “respectable” black people who didn’t make a fuss about this whole equality thing and were content staying on their side of the city and sitting in the back of the bus.

Not only that, but to focus on how people are protesting rather than the actual injustices themselves is not genuine concern. No matter how "respectable" you think Martin Luther King, Jr. is now, don’t forget that while he was alive he was repeatedly insulted, assaulted, arrested, and eventually assassinated for peacefully protesting racism. Oppressors don’t care how nicely the oppressed dress up their message for equality. Your concern is misplaced and therefore not welcome here. To focus on presentation shows that you not only don’t understand history, but you’re already on the wrong side of it.

While initially there were incidents of looting in Ferguson, the majority of the protests began peacefully and remained peaceful. To focus on the actions of a few and use them to condemn the entire community is to once again, willfully lose sight of the real issues that led the protests in the first place. Even Martin Luther King, Jr. understood this, evidenced by his speech at Grosse Pointe High School, years after his more famous “I Have a Dream" speech:

“And I would be the first to say I am still committed to militant, powerful, massive, non-violence as the most potent weapon in grappling with the problem from a direct action point of view. I am absolutely convinced that a riot merely intensifies the fears of the white community while relieving their guilt. And I feel that we must always work with an effective, powerful weapon and method that brings about tangible results. But it is not enough for me to stand before you tonight and condemn riots. It would be morally irresponsible for me to do that without, at the same time, condemning the contingent, intolerable conditions that exist in our society. These conditions are the things that cause individuals to feel that they have no other alternative than to engage in violent behavior to get attention. And I must say tonight that a riot is the language of the unheard.”

When I used this quote to explain my point, the person I was arguing with on Facebook dismissed me with a simple "whatever you want to believe." So as it turns out, Martin Luther King, Jr.'s "message" is only important to racists as long as they can use it to police and derail discussions about race. I'm guessing that Martin Luther King Jr. would not be too pleased about that.