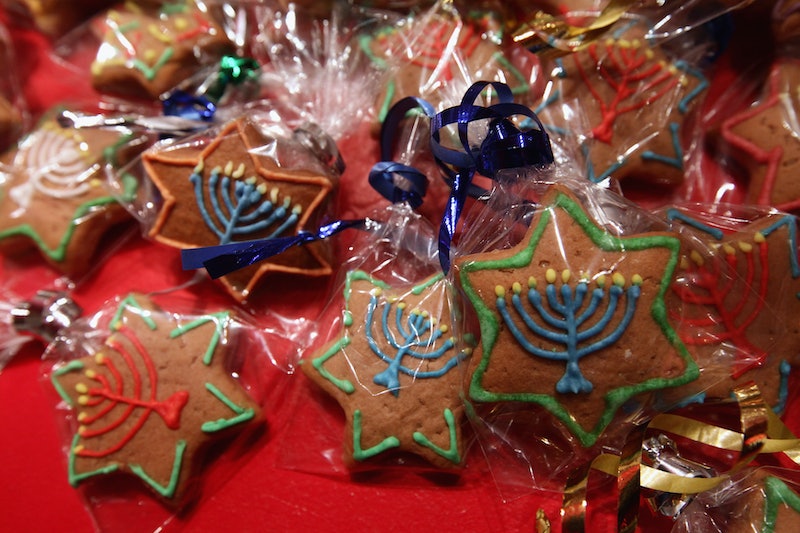 At no other time of the year do I yearn for my Jewish roots more than the Christmas season. As you'd guess with a name like Jordan Rosenfeld, I am “one of the tribe.” But I do not practice Judaism, though I have always been drawn to it. I’d even go so far as to say that for many years, I felt destined for the religion — like a sacred room waiting for me to step inside at any time.

The problem is, the only potential religious role models in my family were all atheists. After losing all but one of their parents in Hitler’s concentration camps, my father’s parents turned away from the religion their family had suffered and died for. “We are chosen only to suffer,” my grandfather, whom I called Opa, said to me bleakly one day.

Still, I’d had a taste of Judaism’s lure by going to Temple with my best friend Lena during childhood —though to be honest, I have no single, conclusive memory of what we did there; just vague mental snapshots of a rough bench beneath my butt, a droning adult, and coloring dreidels. And oh, the dreidels! Every year when Hanukkah rolled around, I wanted a dreidel so badly. They seemed to represent all the mysteries denied to me.

For as long as I can remember, the month between Thanksgiving and Christmas was like an ornate, glowing parenthesis to our normal lives. We didn’t talk about its Christian roots — there was no mention of Jesus in either house, except as an expletive — but it was the rare time of year when my parents made a collective effort at coming together, focusing on a temporary joy.

Like his father, my dad didn’t take up the mantle of his religion either, though he did insist on a Bar Mitzvah when he was thirteen, which I'd always found odd. Six-years-old when the family moved from Israel to New York, he wanted only to shrug off the beast of his parents’ immigrant status.

Yet, one year, at my urging — somewhere between ages ten and twelve, when I had either studied Hanukkah in school or read The Diary of Anne Frank — I begged my father to get us a menorah and celebrate my limited understanding of the holiday by lighting the beautiful white tapered candles, one for each eight nights. He agreed, with no real enthusiasm, but forgot to light the candles more than half of the nights. As a child, you’d think I was just in it for the presents, but in truth, the ritual attracted me more.

An only child until age 14, my parents divorced when I was two, and I shuttled between their houses week to week, schedules in constant flux, with very little consistency. On one end, my father was making an illicit living behind his legitimate acupuncture practice, exchanging fat stacks of cash for blocks of a different kind of green, with men who sometimes carried guns. On the other, my mother struggled with addiction, alternating between a zombie-drag around the house and a manic functionality. They both worked full time, and I let myself in at the end of each school day with a key to an empty house or apartment.

I created my own rituals: Cereal filled to a certain level of the bowl, pillows arranged on the couch, and my book, journal, and pens spread out on the coffee table or carpet before me as I settled in to entertain myself until a parent came home.

The only collective ritual that both my parents participated in, then, was Christmas. We “celebrated” Christmas in much the same way that many non-religious Americans do: as a festival of twinkly lights and sparkly decorations. As a brief respite from the darkness. For as long as I can remember, the month between Thanksgiving and Christmas was like an ornate, glowing parenthesis to our normal lives. We didn’t talk about its Christian roots — there was no mention of Jesus in either house, except as an expletive — but it was the rare time of year when my parents made a collective effort at coming together, focusing on a temporary joy.

When I moved to the dorms in college, my roommate was Jewish, and I hungered to make noodle kugel with her family, to speak Hebrew, and to celebrate all the holidays. I turned to my grandparents once again, and told them I was ready to learn more about my religious roots.

“We’re the wrong people to ask,” Opa wrote me back. “But here’s something you might read.” He’d included a glossy book of the “Haggadah of Passover”— with an earnest young child on the front gazing up at a wise elder. On the back, there was a colorized photograph of five Jewish scholars with long white beards above the words, “Ask your father and he will inform you; your elders, and they will tell you.” Opa, a man upon whom humor was lost, clearly did not get the irony of this.

Rebuffed, and with the memory of the failed Hanukkah in mind, I decided I wouldn’t make a very good Jew. Yet that yearning remained, like a thread at the base of my skull, constantly tugging. A few years into college, an older female friend invited me to go to her reformed, liberal synagogue. This time, I felt like I’d come to a welcome hall, with its soft wood paneling and warm lights. It was not unlike those AA meeting rooms my mother used to bring me to — I half expected a carafe of coffee and a plate of stale cookies.

The presiding rabbi was a woman with beautiful curly brown hair, freckles, and a welcoming smile. After prayers and words, she gathered us into a circle. She didn’t ask me what right I had to be there, as I'd feared. “Let’s all speak the name of someone we’ve lost.”

People said names at random, and though I had no intention of speaking a name, suddenly one was on my lips: Rosa Weingarten. My great-grandmother who died at Bergen-Belson concentration camp.

We started to sing. I didn’t know the words — I don’t even recall if they were in English or Hebrew —but I stood in that circle and hummed, sudden and surprising tears pouring down my face, a stranger’s hand in mine, my friend’s in the other. Something burst in my chest and then lifted up out of me with an almost physical pressure, the tears coming harder, as though I had carried my great-grandmother inside of me without knowing all these years.

But here I am again: it’s the holiday season, and people are asking me if it’s okay to send me Christmas Cards, and whether my 6-year-old son practices Judaism. This pushes me to ask deeper questions, on behalf of my son as much as myself, about whether a religion is necessary to ground a child in the world.

I certainly experienced some loneliness as a child that Christmas helped alleviate — but then again, my family was "broken," and my son's is whole. While I brood nostalgically on fantasies of grand Jewish traditions, in truth, my upbringing, in which my parents encouraged me to pursue any and all spiritual paths and traditions, helped me turn to writing, which is my own version of a spiritual practice.

At 40 years old, I'm more compelled to find the universal messages in all religions than to plant myself on a specific path. So for us, Christmas will continue to be a celebration of bringing loved ones together, driving to see the Fantasy of Lights in the park, playing the Charlie Brown Christmas Album, opening the Lego Advent calendar, and sharing meals with relatives we don't see often enough and reflecting on the joy and bounty of our lives.

I take no issue with anyone sharing their religious traditions with us — in fact, the wider variety my son is exposed to, the better chance he has to decide what works for him. As it is, his father has been a practicing Buddhist for over twenty years who enjoys the pleasure my son and I take in decorating for the holidays. Ultimately, I've come to see that for us, Christmas is a time of bringing some joy to the mid-winter gloom, of coming together as family in the midst of our far-flung and hectic lives, and taking time to appreciate what we have.

I don’t want to tell my son that he can or can’t pursue his own questions about the meaning of life and god inside a religious framework of his choice. Since he doesn’t carry my last name, he won’t be likely to have to contend with the question of being Jewish enough. For him, it may be just another curious piece of his history, or, like me, he may also be drawn to the lure of the mysterious room of tradition, where a gentle music seeps out through a waiting door.

More like this
22 Movies On Netflix That Are Perfect For The Whole Family
By Bustle Editors
The Best Time To Date After A Breakup, According To Experts
By Bustle Editors
20 Things You Should Never Tolerate In A Relationship
By Rachel Sanoff and Kathleen Ferraro
12 Ways You're Sabotaging Your Love Life
By Teresa Newsome and Lexi Inks
Get Even More From Bustle — Sign Up For The Newsletter