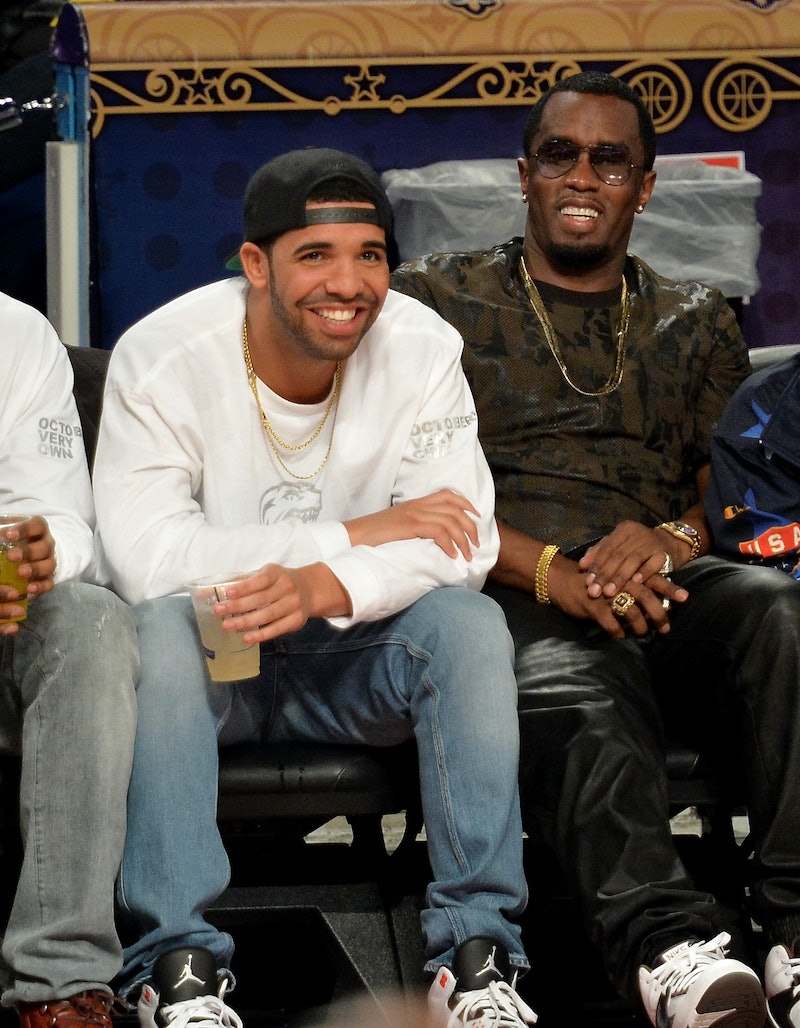 Before I get into all the crazy details surrounding the fight between a certain Bad Boy CEO and a beloved Toronto rapper, I have to say that I simply cannot take a Diddy and Drake fight seriously. I mean, Diddy's had his fair share of altercations and controversies with other rappers in the past, but punching Drake? It just seems so ridiculous because Champagne Papi's earned a reputation as someone who's more prone to loving instead of fighting. This is a guy who began his rap career with the mantra, "Diss me and you'll never hear a reply for it."

Clearly, that line went out the window a long time ago, especially since Drake's had some public beef of his own with Chris Brown and even tennis star Nick Kyrgios. And now Diddy?! Anyway, the latest update is that Diddy and Drake were fighting over a song, which makes this entire debacle even more laughable.

Regardless of who hit who first, or who's responsible for stealing a song like a thief in the night, I'm going to declare that Drizzy and Diddy need to kiss and make up already. It might sound unfair, but as a relative music newcomer, especially compared to Diddy, the burden lies on Drake to make this right.

Here's why Diddy and Drake should let bygones be bygones:

...'cause he can't stop, remember? This thing could possibly drag on into eternity. No one wants to hear about Diddy and Drake beefing 30 years from now. Please guys, spare us.

They Used To Be Friends

This was a much better look than fighting outside of clubs.

If this sounds like a lecture, that's because it is. Instead of fighting with someone who was making moves in the music industry while he was still a tiny tot in Toronto, Drake should be poppin' bottles and enjoying the good life.

Drake's a Lover Not a Fighter

No, Drake. I've never been sold on your attempted tough guy image.

In fact, there are too many to count. Diddy and Drake should stick to lyrical jabs that don't make it past the mic.

Lil Wayne even wants out of there. It'd be a shame if Drake encountered troubles at Cash Money and had to grovel at Diddy's feet for a spot on the Bad Boy roster. (This probably won't happen, but it's still funny to imagine.)

Drake Has a Reputation to Maintain

Remember when Lauren O'Neil invented "draking" to make everyone in Toronto smile? Yeah, they're probably not smiling right about now, Drake.Images: Giphy (7)

More like this
Lauv Is No Stranger To Taylor Swift, Drake, Ed Sheeran, & Fame
By Alyssa Lapid
Twitter Is At Odds Over Taylor Swift’s Possible ‘All Too Well’ Oscar Run
By Brad Witter
Megan The Stallion’s “Anxiety” Song Shouts Out Britney Spears & Whitney Houston
By Grace Wehniainen
The Best Memes & Tweets About Beyoncé’s Surprise “I’M THAT GIRL” Video Teaser
By Brian Anthony Hernandez
Get Even More From Bustle — Sign Up For The Newsletter