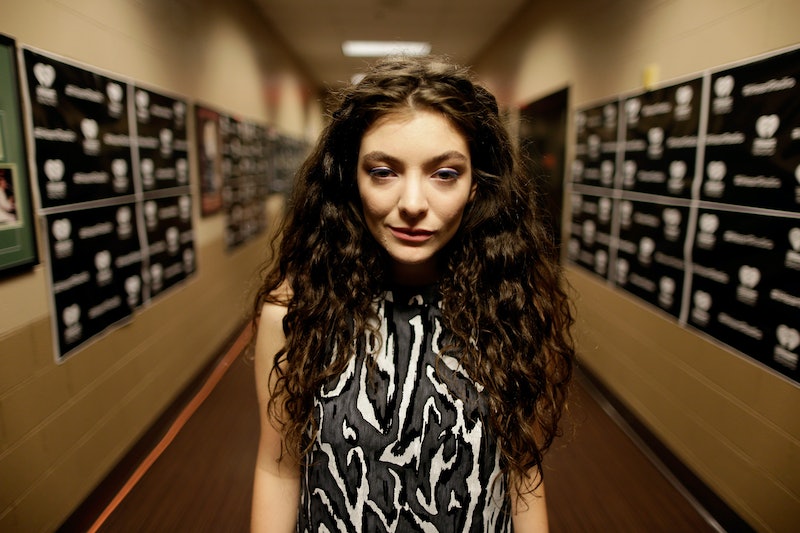 Lorde has certianly experienced some crazy levels of fame and critical accolades, all before most people are legally able to vote or to consume an alcoholic beverage in the United States. Still, Lorde, who has a gothic, somewhat masculine style, has proven she is more astute than many of her older pop star peers with the smart things she has said in interviews. While those very words may have spurred a beef with Selena Gomez, it demonstrated a wisdom beyond her years. Now, Lorde has said something so outrageous that it had to be questioned at first. Lorde claims she trolls trash bins looking for all sorts of treasure. How very urban forager of her.

She said this all the while looking gorgeous, with her usually wild mane of curls tamed and straightened for the cover of The Telegraph's Stella Magazine. Lorde said she rummages through garbage to find some of her fashions and at first, I couldn't tell if she was being serious or if she was being sarcastic.

Given Lorde's seriously delightful irreverence and her refusal to act in a way that people think a (reluctant) pop star should, it could have been either.

Calling herself "boring" since "my favorite thing to do is trawl the inorganics," Lorde spoke about a New Zealand recycling initiative, where people clear out their homes and the trash "stays on the street for a few days and then it's collected and put into a landfill somewhere. But people drive around and go through other people’s household rubbish. And, honestly, I've gotten amazing furniture, shoes, hats, jackets… I did this three weeks ago!"

So Lorde cares about the environment with her version of dumpster diving. I get it. One person's trash is a pop star's coffee table or accessories. She doesn't need to forage through junk, but she does.

And yes, she's been caught and called out: "Recognized every single time. So embarrassing," she said.

Hmmm… I guess it's not much different than shopping at a thrift store, right? And if you live in a bigger city, you've probably seen rich people exiling their furniture and stuff to the curb when moving or redecorating. It can be a treasure trove of expensive, amazing stuff that deserves a second lease on life. Am I admitting that I may have lifted something awesome that way? I plead the fifth...

But back to Lorde.

The "Royals" singer also said that she is not a label whore and she doesn't meant that figuratively. "I cut the labels out of everything — they scratch me," she noted. Fair enough.

One thing Ella Yelich O'Connor said that I think she was being totally truthful about? Her preference for menswear, namely suits.

"The stuff that I feel comfortable in, and beautiful and cool and strong in, is different to what this pop star or this indie musician feels comfortable in," she said, illustrating that she is self-aware. "I put on a suit and I’m like, 'I'm a badass!' And that to me is my daring."

I could not agree more. If a suit makes her feel badass, she should wear it, no matter what best or worst list she may end up on because of it.

Even so, if others want to show leg, sideboob, sidebum, and more, it ain't no thang for Lorde. "But if it happened to be a bra and undies that made me feel that way, why deny yourself that?" she said. "In a world that is trying to tell women all the time that you can’t have something that you want for whatever reason, I don’t think about being demure."

And this, this is why I love the non-demure dumpster diver that is Lorde. I still can't see her recruiting her bestie Taylor Swift to spelunk a dumpster to find a cool sweater, though!