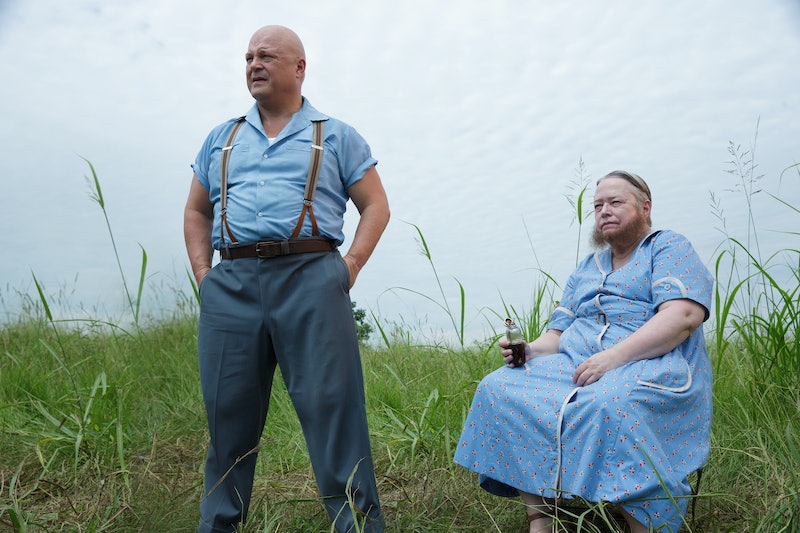 It's hard to feel bad for Dell on American Horror Story: Freak Show since he killed Ma Petite. But Dell just tried to kill himself in "Tupperware Party Massacre," so I have to feel some compassion for him. He would have succeeded if Desiree hadn't stopped him and we saw him writing a suicide letter to his son Jimmy. But his reasons for wanting to kill himself aren't completely clear. In a flashback, we saw Stanley approach Dell in the road and show him his penis. So did Dell & Stanley (and the huge penis) have sex? Or was he more concerned that Stanley could out him?

At least the scene in the road meant that there was kind of a point to Stanley's huge penis. And we knew Stanley had seen Dell at the gay bar, so he knows of Dell's secret — and his love of Andy. Dell could have wanted to kill himself out of shame for sleeping with Stanley — the man who put him up to killing Ma Petite. But, we don't know that for sure. We do know that Dell is committed to keeping his homosexuality secret (even if he isn't the most discreet about it), so it's a bit ironic that his wife Desiree was the one to save him.

Perhaps, Dell actually denied Stanley's advances and was worried about the repercussions. He knows Stanley is not one to be trusted at all, so it wouldn't be surprising if Stanley leaked his secret to the other freaks. But I would think that him killing himself wasn't all about Stanley and his struggle with his homosexuality. The combination of the death of his former lover Ethel, his murdering of Ma Petite, and Stanley's manipulation of him (sexual and otherwise) is obviously a lot for any one person to handle.

Let's hope Dell's second chance at life will give him a new perspective — and perhaps a stronger moral compass. Maybe he can be the person to finally reveal how evil Stanley is.