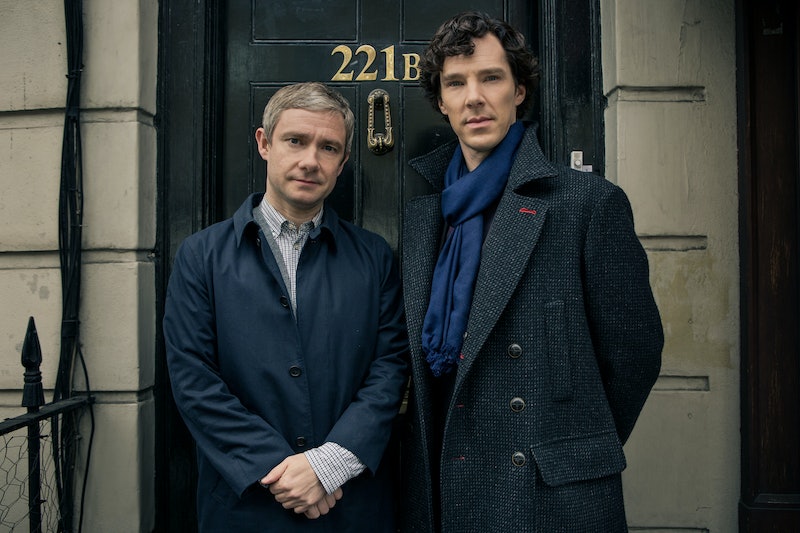 In 2013 Benedict Cumberbatch's work in Sherlock earned him a Golden Globes nomination for Best Actor in a Mini-Series or TV Movie, but since then the awards show has changed how it categorizes things. Now, a mini-series is defined as "a complete, non-recurring story.” That's how True Detective moved from a drama to a mini-series because its first season is considered a complete show with characters and plot unique to that one season. Sherlock, meanwhile, is now considered a drama series because it has an "on-going theme, storyline or main characters" and is "presented under the same title [with] continuity of production supervision within the year and from year to year.”

Since number of episodes no longer has any bearing on the categories, Sherlock, and its three episodes, was lumped into the drama category against heavy weights like Game of Thrones, Downton Abbey, House of Cards, and The Good Wife. Though Sherlock's third season was very good and Cumberbatch and Martin Freeman excelled in their roles as usual, it's hard for a three-show series to compete with the rest of the drama category and their multiple episodes.

This rule change is likely why Sherlock received no nominations for its most recent season. But even if there's a reason behind the snub, fans are still extremely disappointed.

The good news is that both Martin Freeman and Benedict Cumberbatch received Golden Globe nods for their other projects (Fargo for Freeman and The Imitation Game for Cumberbatch). Though the lack of Sherlock is disappointing, all isn't lost if fans can still root for them to win something. And who knows, maybe by the time series four finally comes out the category rules will have changed again.

More like this
'Doctor Strange 2' Star Benedict Cumberbatch’s Net Worth Is Not An Illusion
By Hugh McIntyre
Remember When Benedict Cumberbatch Announced His Engagement In A Newspaper Ad?
By Hugh McIntyre
20 Photos From The 'Stranger Things' Season 4 Premiere To Make You Feel Old
By Alyssa Lapid
Marvel's 'She-Hulk' Trailer Is Finally Here & The Hulk Lends A Big Helping Hand
By Grace Wehniainen
Get Even More From Bustle — Sign Up For The Newsletter