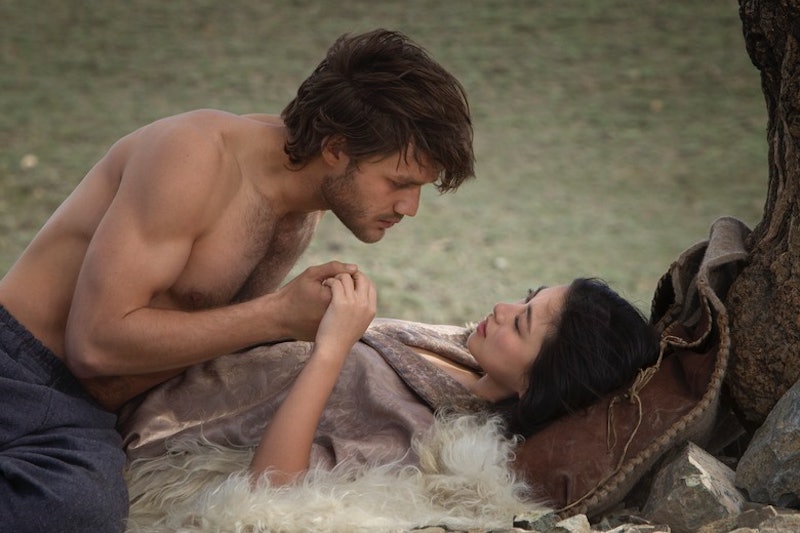 You may know him best as the name of that game you played every time you were in a pool when you were eight years old even though it wasn't that fun because what the heck else do you do in a pool when you're eight years old, but Marco Polo was actually the 13th century explorer who was largely responsible for introducing Europe to the cultures of Central Asia. And now, Italian actor Lorenzo Richelmy puts a handsome face with the Marco Polo name.

The real Polo traveled around the continent for 24 years, spending much of his time in China with the Mongolian emperor Kublai Khan. Obviously hoping to cash in on the popularity of HBO's Game of Thrones, Netflix has decided to premiere Marco Polo, a show about the explorer's life story, as their next original program, replete with all the blood, sex, and political intrigue you could possibly hope for in a series with a $90 million budget. (That's half again as much as HBO spent on Season 1 of GoT, which came in at $60 million, just for the record.)

And the entire endeavor hinges on one man: Lorenzo Richelmy.

Who? The 24-year-old actor headlining Marco Polo is an unknown quantity... this side of the Atlantic, at least. Richelmy grew up in Rome and started acting in plays when he was only eight years old. By the time he was 17, he had starred in a popular TV show about high school students and been named an "Emerging European Personality" by Italy's Ministry of Tourism. He then received formal acting training at the Experimental Centre of Cinematography, the oldest film school in Western Europe, before going on to star in a series of films that won him Best Actor prizes from festivals around Europe.

Marco Polo is not only the first thing American audiences are likely to see Richelmy in, it's also the actor's English-language debut... literally — he didn't speak a word of English until Netflix hired him a dialect coach just in time to start filming. Aside from learning an entirely new language, Richelmy also had to train in kung fu, sword fighting, archery, and horseback riding and shoot intense battle sequences with 300-plus extras in such exotic locations as Kazakhstan and Malaysia.

Having the fate of a new $90 million series resting squarely on your shoulders would be enough to give even the most seasoned actor pause. How is Richelmy handling that responsibility — not to mention the impending fame that's likely to come from starring on a show on Netflix, the increasingly popular company behind such binge-watching mega-hits as House of Cards and Orange is the New Black? Surprisingly well, actually. But there's a reason all this hoopla hasn't really fazed him: they don't even have Netflix in Italy. (I know, can you even imagine? The horror!) "I didn't know what it was," Richelmy admitted to Reuters. "The first time they told me it was Netflix, I said 'I wish it was HBO!' (laughs) And then I realized it's much better."

Them's fightin' words! Tread lightly, Richelmy, or you may just find yourself in the middle of an all-out war between HBO subscribers and Netflix aficionados.