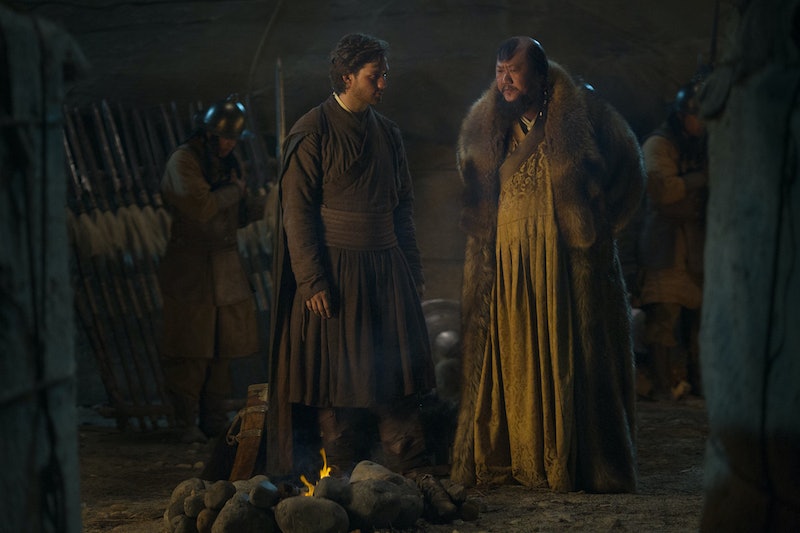 “Oh Netflix, I trusted you! We all trusted you! After all of these series filled with roles for women that are interesting and complex, so different from the norm of network television, you go and do this to us.” That’s just a little taster of how you might feel after watching the first official trailer for the upcoming Netflix original series Marco Polo . Dabbling into the popularity of the Game of Thrones adventure/epic genre, the masters of Internet TV are bringing us the story of the famous explorer and trader who was unwillingly given to Mongol emperor Kublai Khan in the 13th century. The trailer takes us inside the dark and mysterious corners of the Eastern world that Polo explored. The locations are incredible, the shots are sweeping and cinematic, the lead is magnetic, there is danger... and plenty of sex. It’s everything that marathon-watching dreams are made of.

There’s just one problem: All of the women are naked. Well, mostly. In the first glimpse into the series, it’s quite clear that the show might already have a problem with women. In just one minute and 53 seconds there are at least three shots of women in the nude, including one of a woman sword fighting in the buff. Even when clothed the women in Marco Polo are depicted as exotic objects of sexual desire, and in more than one case, are subjected to intense physical violence. Meanwhile, the menfolk get to be emperors and warriors. SOUNDS FUN, EH?

The series has yet to air, and there may very well be more diverse roles for women in the series. However, as the trailer stands, the women tend to be deeply stereotyped or total afterthoughts. As far as I’m concerned, the last thing we need is another hyper-violent epic where there are as many boobs as there are broken necks...in which both cases the total is somewhere between, “too much for my taste” and “excessive.”

It’s a bit of a surprise coming from Netflix, especially since their most popular and acclaimed series have actually helped to change the way women are portrayed on television. Sure, both Orange is the New Black and House of Cards have nudity, sometimes graphic sex, and violence. However, the treatment of those are often done in a way that are either honest to women and women’s sexuality or do not always portray women as victims to their treatment — there is much greater control at the hands of the women themselves, which is sadly, still not often the case on television.

Take a look at how women are represented in Marco Polo:

Gee I wonder if there will be something happening there with her and Mr. Polo.

Do not try at home.

Check out the full trailer here:

More like this
After 'Heartstopper' Used This Indie Artist’s Song, Streams For It Soared 8,000%
By Alyssa Lapid
Why The '365 Days' Sex Scenes Are Good, Even If The Movies Aren’t
By Arya Roshanian
There's Plenty Of Source Material For A Potential 'Lincoln Lawyer' Season 2
By Kadin Burnett
'Virgin River' Season 4 Finally Has A Release Date
By Bustle Editors
Get Even More From Bustle — Sign Up For The Newsletter