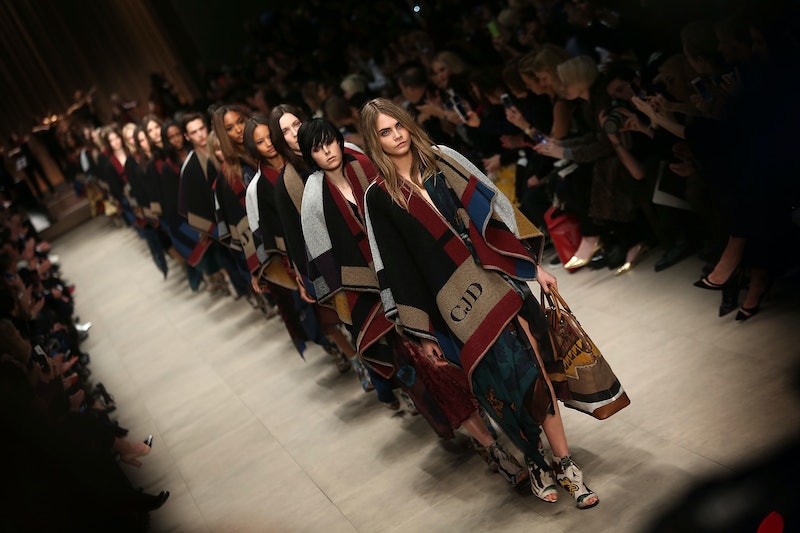 Though much of the world's Northern Hemisphere is thinking about how to get through another stormy winter before it can even begin to contemplate next summer of autumn, the fashion industry is in the throes of Pre-Fall 2015 collections. It may seem somewhat chaotic to insert yet another season into a sartorial calendar that already has more than the average calendar year, but the fashion crowd has always been a group of overachievers.

Pre-Fall collections don't arrive with as much pomp and circumstance as New York Fashion Week or the Paris couture shows, but it does dictate exactly which trends are likely to hit the streets come September. For those still confused by the notion of Pre-Fall, the heavy coats and thick pantsuits populating each collection aren't expected to be worn in the dog days of summer. Rather, Pre-Fall offers a sartorial transition when the temperature cools and Fall collections haven't quite hit the racks of department stores.

Pre-Fall's looks for 2015 are quite the diverse bunch, but luckily several themes have emerged. Though street-style mashups are still an inspiration, designers veered toward more polished, professional pairings rendered in rich fabrics and colors. And for those who aren't ready to give up their trendy '60s gear yet, the collections boasted an infusion of vintage glamour. Here are five of 2015's top trends based on the Pre-Fall 2015 runways.

1. Slit Skirts and Origami Shapes Are In

Hold on to that slit skirt or envelope mini from last season, because 2015 is calling both back to the big leagues of style. Alexander Wang, Altuzarra, Jason Wu, and Temperley all spiked their collections with slit skirts and structural, origami shapes. Both maxi and mini silhouettes were shown, so don't immediately assume you need to pull a dramatic Angelina Jolie–style look out of your closet.

2. Muted Prints Are a Must

If you haven't received the memo by now, autumn is often characterized by an abundance of rich, earthy tones on the runway and in stores. But for 2015, those shades are paired with matching patterns. Burberry took the chance to render several cozy coats in dulled navy or army green patterns (though, admittedly, there were a few leopard-print pieces mixed in), while Creatures of the Wind took a similar approach to its bohemian dresses and skirts.

Stripes are a non-negotiable trend this fall, so much so that it would be more difficult to name designers who didn't feature stripes in their Pre-Fall collections than those who did. Public School, Escada, and Fendi were a mere subset of the stripe-wielding Pre-Fall collections.

Both Band of Outsiders and 3.1 Philip Lim infused their collections with Peruvian influence. The former utilized slouchy, Peruvian sweaters for Pre-Fall, while the latter lifted vibrant inspiration from the country in the form of fringe and ruffles. Look for cozy knits, intricate patterns, and textural elements to channel the trend.

Vintage was the magic word at ALC, Band of Outsiders, and Erdem, where the '60s and '70s came to life in a very modern fashion. ALC boasted a mod minidress and an ethereal, printed maxi dress while Band of Outsiders' faded palette and usage of denim harkened back to the era. Erdem's signature floral shifts were meanwhile paired with thick white collars or vintage-inspired mock-necks.

Sport Pre-Fall's trends with gusto, but remember: Don't wear them all at once.