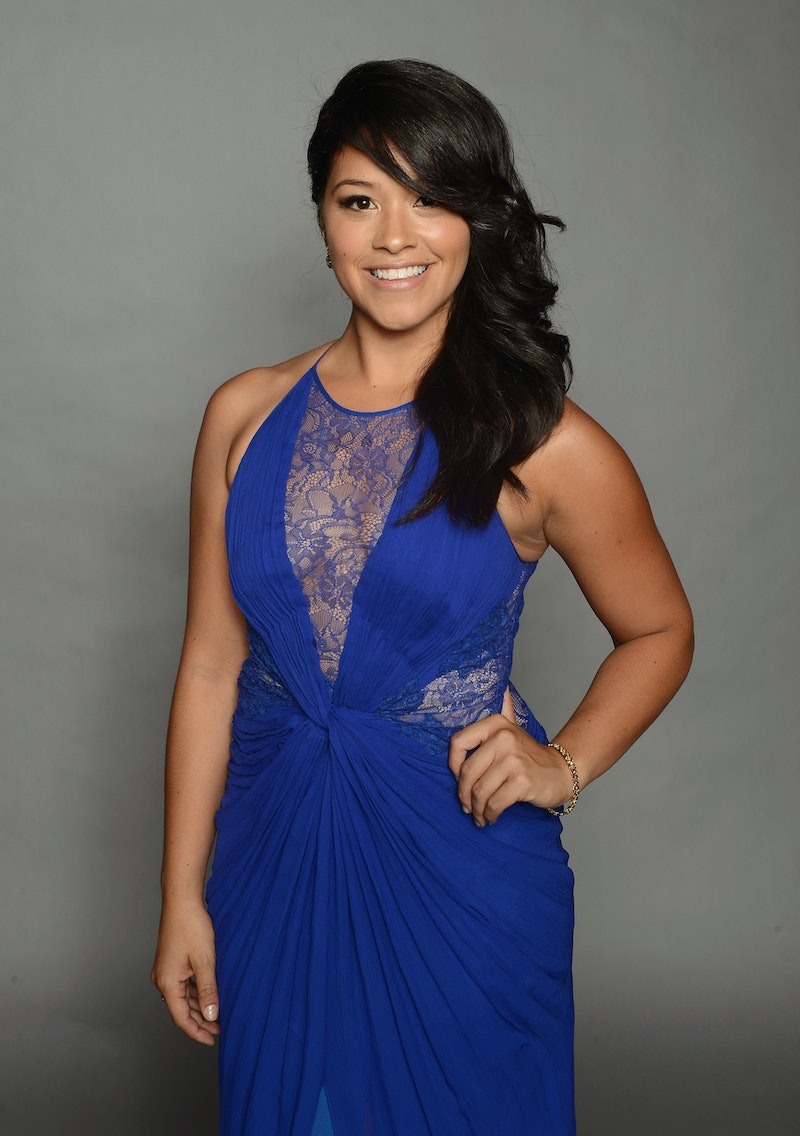 Let's all think back to the time it was announced that The CW picked up the new series called Jane the Virgin . Not only did people laugh at the title, but it filled many TV viewers and critics with skepticism. Enter actress Gina Rodriguez as the titular character and soon enough TV critics had nothing but rave reviews to give the show and the actress. After blowing through the first four episodes, I quickly felt the same way. The authenticity, the realness, the quirkiness, and the diversity are just a few of the reasons that this telenovela is taking network TV by storm. The little show that some didn't think could is now a part of one of the biggest award shows of the year. Thursday morning it was announced that Gina Rodriguez was nominated for a Golden Globe for Best Actress in a TV Series, Comedy or Musical, along with the show snagging a nom as Best TV Series, Comedy or Musical. These two nominations were part of many surprise recognitions, and I couldn't be happier.

Per usual, the stars and creators are responding to their nominations, but no one is doing it quite like Rodriguez. It's no surprise that she embodies elegance and eloquence worthy of envy, which she continues to do with her reaction to her nomination. Rodriguez opened up about being a Latina nominee and how she hopes it brings inspiration to others. With that said, I'll let her words speak on their own.

Her Response to TheWrap

Her Candid Words to BuzzFeed News

“Towards me not being a lead, people being against the title, our Monday night slot, the most difficult slot against the biggest shows ... everything was pointing to us failing. And to succeed, to strive, to rise above, to fight harder, to be more ambitious, and to show people that we have a great product because Jennie Urman [the show’s creator] is brilliant, means that I can now say — not just to Latinos, but to everyone — that all the odds were against me, but hard work and dedication and perseverance and being good to people does win. It does matter. Cream does rise to the top.”

“The fact we got recognized and that I’m the first person to get recognized from The CW and I’m a Latina, I would be empowered by that … I am empowered by that.” Later on she added, “We need it for tolerance in this country, we need it for tolerance all over this world. We need role models so we can change our world for the better. And if we can do that through art, how magical!

“Inspiring others is all I wanted to do this for. For so long so much of my life has been trying to make my parents proud and I realized in my search for acceptance from my parents that I was really creating a movement that I needed as a kid. I needed to know I could do it. I needed to see somebody do it before me. There are so many women who paved the way for me, so to think I can open the door for the next, that’s everything."

(FYI, be sure to read this interview in its entirety, because it shows the class-act and inspiration Rodriguez truly is.)

Finally, As She Told the LA Times

If you're not a fan of Rodriguez or Jane the Virgin, I bet you are now. Congrats to this amazing show and actress on their nominations!

More like this
Taylor Swift Reacts To The Ticketmaster Controversy After Twitter Outrage
By Jake Viswanath
Kelly Rowland Defends Chris Brown At The 2022 AMAs After Crowd Boos His Win
By Jake Viswanath
Amanda Gorman Shared A Powerful Message On Meghan Markle’s Penultimate Podcast
By Darshita Goyal
The First Trailer For 'That '90s Show' Includes So Many Nods To The Original Series
By Jack Irvin, Alyssa Lapid and Grace Wehniainen
Get Even More From Bustle — Sign Up For The Newsletter