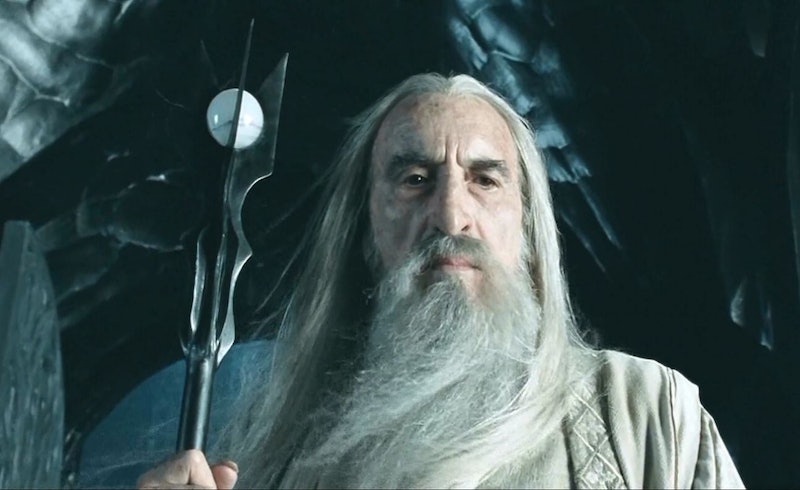 If you've been watching The Hobbit movies you'll take note that we've been dealing with a kinder, gentler, friendly neighborhood Saruman. It's a bit perplexing since Saruman is a stone cold baddie in Lord of the Rings, and many of you may be scratching your head, wondering what happened. For those who read The Hobbit (or listened to the audio book that annunciates weird, like "Jay Ahr Ahr Tol-Keen") you'll remember that Saruman wasn't in the original novel, making his appearance here very debatable canon. But if it still bugs you, maybe this explanation will help.

In Letters of J.R.R Tolkien, Tolkien waxes philosophically about the involvement of wizards in Middle Earth, how they act as magical beings yet still have the moral malleability of humans. He states:

They were... thus involved in the peril of the incarnate: the possibility of "fall", of sin, if you will. The chief form this would take with them would be impatience, leading to the desire to force others to their own good ends, and so inevitably at last to mere desire to make their own wills effective by any means. To this evil Saruman succumbed. Gandalf did not.

In plain English: it was a sheer lack belief. Saruman looked into the eye of Sauron and saw an inevitable defeat, and fear of that led to corruption. That fear, coupled with the devilish allure of the One Ring of Power, drove him to be the twisted figure you see in Lord of the Rings. Gandalf, comparatively, saw evil on the horizon and assembled an army to fight against it.

If this answer doesn't satiate, feel free to contact your local Tolkien aficionado (or hey, call Stephen Colbert) for detailed information. Other option: recognize evil as a required quality of any Christopher Lee character and call it a day.