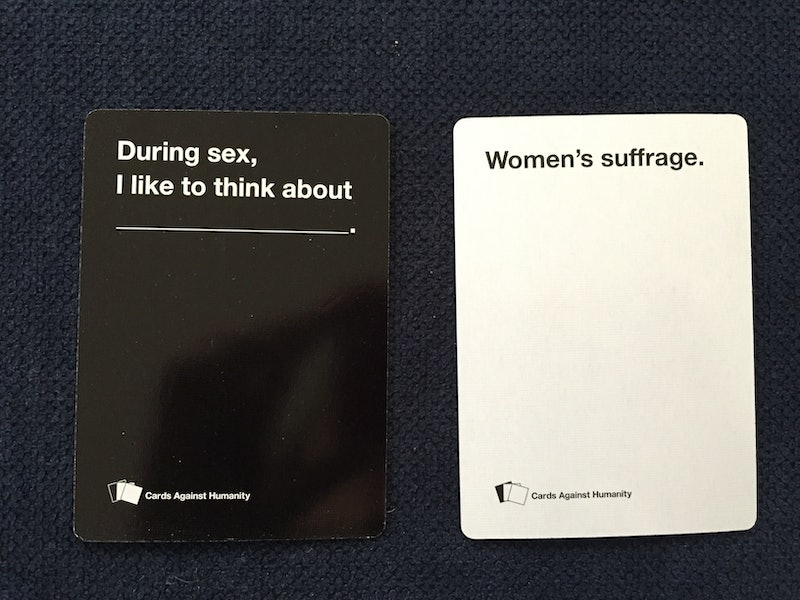 We all know what happens when assholes play Cards Against Humanity, everyone's favorite offensive party game — The (now discontinued, thankfully) "passable transvestite" card gets trotted out far too often, the "Virginia Tech Massacre" card becomes the punchline of some gross joke, and people lament the absence of the "date rape" card in updated editions. The game can be hilarious and outrageous...but it can also be basically a clearing house for racist, sexist, and just generally offensive jokes. So is it possible to play Cards Against Humanity while being politically correct? And would that be any fun?

It really is a magical little thing and should be celebrated. On the other hand, though...

Can we stop teaching these girls that pretty is the most important thing? That said, though, you can be a feminist beauty pageant contestant.

Our mutual satisfaction determines when sex is over, dude.

May we refer you to this vibrators roundup?

Looking at you, Westboro Baptist Church.

Happily unmarried? This one is for you.

It may not be working as far as political capital goes, but it is working guys.

That said, achieving it could have been easier if you had referred to #3.

Equality is tooootally a turn on.

More like this
Women Around The World Are Cutting Their Hair In Solidarity With Mahsa Amini
By Darshita Goyal
The 19 Best Tweets & Memes About Bisexual Awareness Week
By Lexi Inks
6 Dating App Tips To Try If You're Looking For A Serious Relationship
By Lexi Inks
Wanna Try Hinge's New Video Prompt Feature? Here Are 7 Tips
By Lexi Inks
Get Even More From Bustle — Sign Up For The Newsletter