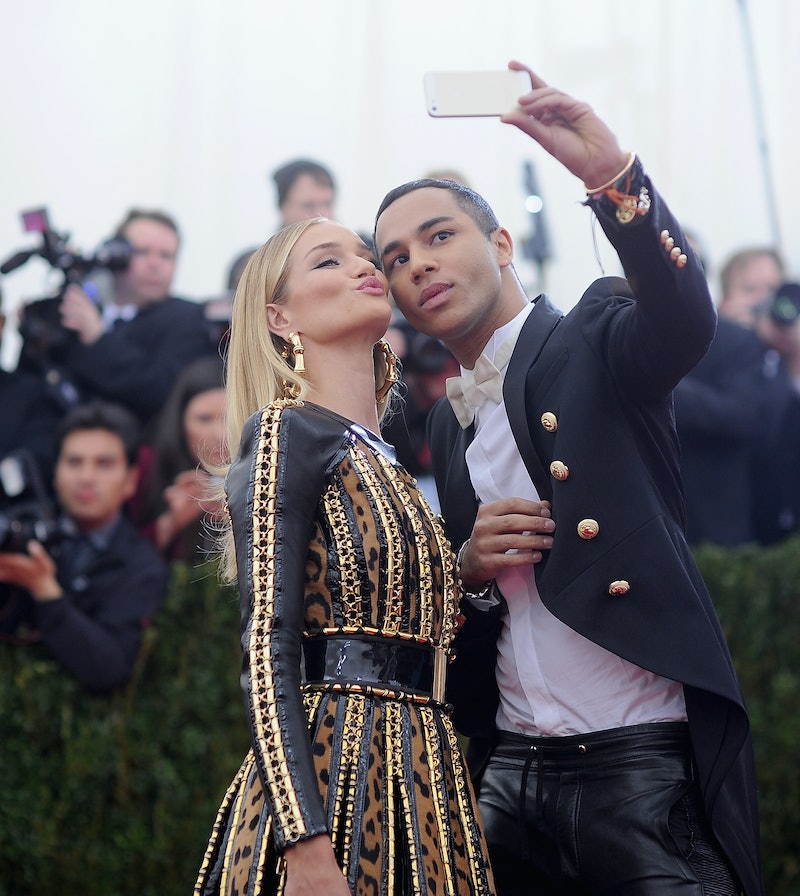 Models chowing down on burgers in ads is not a new concept. Kate Upton did it in a commercial for fast food chain Carl's Jr. a bit ago. But Carl's Jr. drive-thrus aren't Balmain runways, now are they? Balmain's Spring 2015 ad campaign features burger-eating models dressed in stripes and other sexy attire. Creative director Olivier Rousteing says the images are meant to convey power.

Adriana Lima, Joan Smalls, Rosie Huntington-Whiteley, Isabeli Fontana, and Crista Cober are the quintet of beauties wrapped in vertical, colorful stripes and black, caged dresses. In some shots, they're noshing on junk food. In others, they're playing video games. Generally, they are having way more fun than we're used to seeing supermodels having.

Rousteing told WWD that "you can't eat caviar every day… I wanted to have power women in the campaign."

OK, so whether or not you are a carnivore, a pescatarian, or a total vegan is of little consequence. It sounds like he means that well-dressed women having a good time and doing as they wish conveys strength. I'll buy that.

Also, Rousteing said the goal of the campaign was to capture '70s French films and their "distorted realism."

To me, that means an updated take on cinéma vérité and would suggest that yes, even models feast on junk food, shaking those old misconceptionsthat they stick to salads or even Tic Tacs in real life so that they can fit into clothes.

Indeed, that's such an outmoded perception of models. So perhaps the goal here was to remind us that models are real people and so is the Balmain woman. It may haven taken a minute to absorb the message, but I picked up what Balmain slammed down.

Oh, and the clothes, while bright and patterned, or cage-y and sultry, are head-turning and unforgettable, so there's that.

In case you totally forgot about it, check out that bombshell Upton as she houses a burger and makes fast food consumption even sexier than usual.