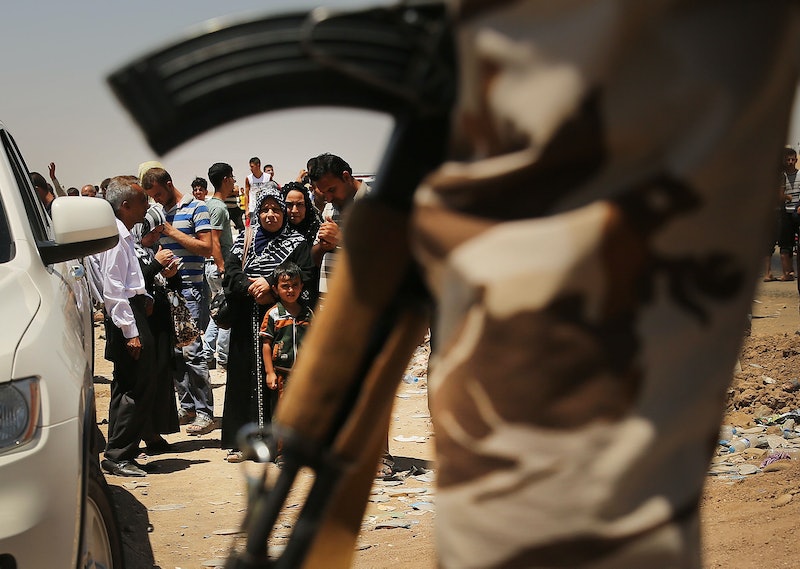 In case we needed any more evidence that ISIS is the most pure form of distilled evil since the Nazis, it turns out that there exists an official ISIS pamphlet that justifies treating female captives as sex slaves. Provided, of course, the women in question are not Muslim, of course, because everyone knows that women aren't ever human but as long as they share your religion you should at least pretend to respect them. I am seriously asking when I say, does this group have any even faintly positive qualities? Because I have yet to hear anything. I mean, even the Nazis were into animal rights.

The document in question, labeled "Questions and Answers on Taking Captives and Slaves," was handed out to residents of Mosul, one of the cities currently under ISIS control. It lays out the fact that according to ISIS it is justified to take non-Muslims women and girls captive, justified to have sex with said captives, even if they are pre-pubescent girls, and justified to sell such captives or give them as gifts. In other words, it's pretty clear that in their world, women are not human. In fact the document lays out a whole series of rules surrounding treatment of — a set of guidelines concerning sex with — female captives that makes it pretty clear in this world women are property. It actually, explicitly says that.

On the one hand, a lot of the things in this document are not surprising; news of ISIS atrocities, including the rape and abuse of Yazidi women, has been coming for months. But it does lay out ISIS's attitude towards women in a way that is breathtakingly clear. It's the sort of thing that is beyond misogyny.

How does this exist in the 21st century? How does this exist in any century? I get that people are awful and if you're not cynical you're not paying attention, and blah, blah, blah, but how does this exist? How do people exist who think of women this way? I honestly want to know how the human race has managed to get so out of whack that anyone could honestly view one half of the species in such a way that this becomes even a remotely sensical viewpoint to hold. That you can draw up a pamphlet entitled "Questions and Answers on Taking Captives and Slaves" that very straight-forwardly lays all this out. How?

I suspect this is one of those things that I will never understand. In the meantime, while there doesn't seem to be an organization accepting donations specifically to help women currently or formerly held by ISIS, you can donate to UNICEF's efforts helping children affected by ISIS's take over of northern Iraq here. Because it's Christmas and sometimes you have to try to fight evil in the little ways.

More like this
How The City Healed Five Years On From The Manchester Arena Attack
By Ella Glover
Starbucks' Summer Menu Includes A New Chocolate Cream Cold Brew
By Emma Garza
Amanda Seyfried Says This One Thing Stands In The Way Of ‘Mamma Mia! 3’
By Jessica Wang and Nola Ojomu
Pete Davidson Mentioned Kanye West & Ariana Grande In His Last 'SNL' Sketch
By Grace Wehniainen
Get Even More From Bustle — Sign Up For The Newsletter