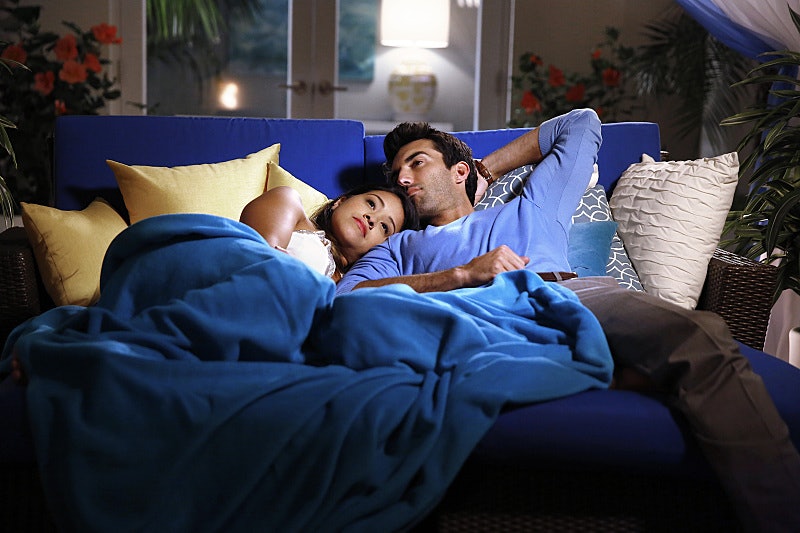 Unless you've been living under a rock these last few days, you're well aware of the fact that The CW's Jane the Virgin was nominated for a Golden Globe in not one, but two categories — one going to the show itself and the other to the series' break-out star Gina Rodriguez. The recognition is well deserved and makes me all the more excited to see what the rest of the season has in store. However, since the show is about to air its midseason finale, I couldn't help but wonder when exactly Jane the Virgin will return from winter hiatus? And unfortunately, I have a feeling that you, like me, aren't going to be too thrilled with the answer because, as it turns out, the freshmen series won't be back until Jan. 19, 2015, immediately following The Originals' return.

See? I knew you weren't going to like it, and I don't blame you. This is a great show after all (hence all the award nominations). And there's absolutely no amount of Christmas presents under the tree that could possibly fill this impending void in our hearts. (Unless one of those packages contains Rafael himself, of course. Then obviously all is forgiven.) Bottom line? This show's temporary absence will serve as a big chunk of coal amid our holiday merriment. Am I being a little dramatic here? NO!!! I mean… probably. But you have to admit, there are a lot of great things about this series that we are all bound to miss. Such as…

Despite the constant drama and romantic entanglements, you can't deny that this series brings a ton of fantastic comedy to the table. Not only does it help make each character lovably unique, but it also serves as the perfect counter-balance to the show's more serious moments. You do you, Rogelio. You do you.

Jane may not be having sex, but damn does she get some chemistry-packed scenes and I am so NOT complaining. It doesn't matter if you're Team Rafael or Team Michael, this show guarantees a ton of romantic moments that will send your stomach all aflutter. Sure, it can be a little cheesy at times, but if you're truly honest with yourself, that's kinda the appeal.

Seriously, you guys, I'm obsessed with everything that Jane wears. I'm not kidding. I legit want to live in her closet, so let's make that happen ASAP.

Because the family that selfies together, stays together.

There's just no denying it, folks — that Jane is one very lucky lady. Be strong, you two. We'll see you in the New Year.