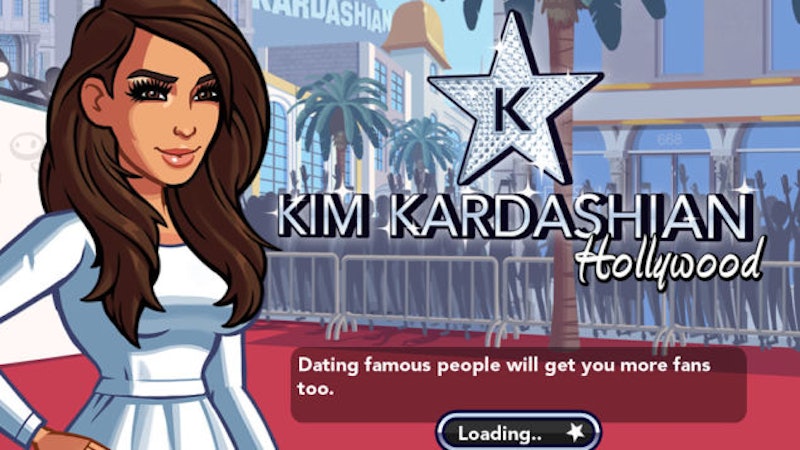 NBD, Kim K. is just continuing her world domination slowly but surely. Thanks to her iPhone game, Kim Kardashian was named most influential fictional character right behind Frozen's Elsa. I had no idea when I heard that the reality star was releasing a video game that it would be so popular. But here we are six months and 200 million dollars later and Kimmy's virtual avatar is taking over the world.

But it's not that surprising that she'd be considered influential. Whether you want to believe it or not, Kim Kardashian has a lot of sway in entertainment, fashion, and now technology. In all seriousness, her virtual version of herself has taught me a lot of important lessons during my time spent playing the game. But still, Time 's award for her game seems a little insincere. They named her number two on their list for this reason:

Kim Kardashian Hollywood convinced users to spend [real money] on fake clothes, jewelry and more, all in an effort to climb the A-list and become best friends with a fictional version of Kim herself, who spouts lines like “You’re a natural in front of the camera. You should get a ‘momager.'"

Yes, Kim does spout those lines in the game, but she also taught players these 10 life lessons.

For anyone stuck in a job they hate, it's important to note that in Kim's game you're a retail clerk until you work your way up to globe-trotting fashionista. If you're motivated and willing to work hard, you can do anything.

Kim Kardashian's game is more inclusive and open-minded than some states are when it comes to gay marriage. Not only does the game let you date whichever gender you prefer, but it lets you plan your wedding to your same sex partner if you prefer. If only the government would follow in Kim's footsteps.

Appreciate When You Have Energy

Nothing goes away faster in Kim's game than your energy bolts, which taught users to be grateful for when that little blue bar was full. The same goes for real life: take advantage of the days you feel completely energetic for energy is hard to come by.

You're Never too Old to Be Annoyed By Your Mother

Hey, it happens to the best of us. It doesn't mean you don't love each other.

Keeping a Marriage Together is Hard Work

If you don't pay attention to your spouse (by taking them on expensive, romantic dates daily) they'll leave you. Maybe that's not exactly how marriage is in real life, but the lesson is still clear: everything isn't smooth sailing after you say "I do." A good marriage requires hard work, effort, and yes, money.

You Can't Always Get What You Want (For Free)

Sure, that blue dress is adorable but it also costs 130 K stars so you're probably never going to own it. It's a hard lesson in not being able to have everything you want, even in a virtual reality.

Dating is a Waste of Time and Energy

If Tinder hadn't already taught you that, Kim would because dating in her game was basically an exercise in spending too much money and energy for basically no reward. That's still how I feel about dating today, so thanks Kim!

What Kim Does is Actually Hard

There's nothing like finishing an 8-hour photo shoot only to have Simon call you up and ask you to do another one. Back-to-back jobs are hard even when you're just tapping on a screen, so I can't imagine what Kim's real life is like with filming and photo shoots and tabloid stories threatening to drag her down every day. If Kim's only goal was to prove that she does actually work hard, this game achieved that and more.

Ask and You Shall Receive

When Kim's game crashed earlier this summer players took to Twitter to complain and ask for K stars in return. They asked, and they received and fun was had by all. So yes, sometimes asking for what you want is the best way to get it in both video games and in life.

Look, I didn't want to be one of the people who spent real money on digital items but I was, and I am. I've probably spent at least a hundred dollars on K Stars to buy pets and cars and houses—and I'm not alone. Kim brought in $200 million from her game in the first couple of months.

So, I think the most important lesson we've all learned here is that it's Kim Kardashian's world and we're all just paying to live in it.