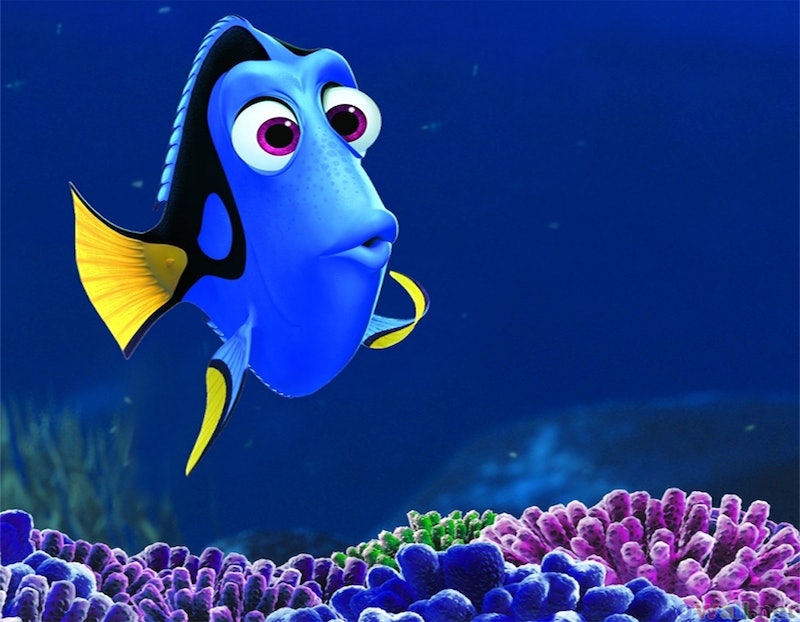 Last night, Disney broke the hearts of children and young-hearted adults everywhere when they announced that the release of Pixar's next film, The Good Dinosaur , has been pushed back to November 25, 2015, from its original date of May 30, 2014. To make things even worse, that was the day the highly-anticipated Finding Nemo sequel, Finding Dory, was supposed to be released. So now, that movie has also been delayed, all the way until June 17, 2016. It's already been over ten years since Finding Nemo was released, we can't wait much longer.

The very worst news of all? This means that there won't be a single Pixar movie released until November 2015. Next year will be one without Pixar, which basically means one without happiness. It's a pretty awful thing to do, especially coming from a company that's supposed to make wishes come true, let you follow your dreams, go on great adventures, etc.

We're going to need something to get us through 2014, lest we accidentally grow up without Pixar to anchor us to childhood. Here are a few suggestions to hold you over for the next, well, I don't even want to think about how long.

Sounds strange, but the trailer (above) for The Lego Movie took us by complete surprise when it was awesome. It also has a stellar cast including Chris Pratt, Will Ferrell, Nick Offerman, Elizabeth Banks, Liam Neeson, Morgan Freeman and the most genius voice casting of all time — Will Arnett as Batman. Set to be released on Feb. 7, 2014, it's the perfect thing to hold you over until The Good Dinosaur, if you're craving an animated film. Since it's based on a kids' toy, it should bring you right back to your childhood, and just like many Pixar films, is still bound to have some jokes meant for adults.

If you need to see Dory ASAP and have already worn out your copy of Finding Nemo, you could always try looking at the real thing. Of course, the fish won't talk, or interact with each other, or do anything besides swim aimlessly in circles, but hey, it's something to do, I guess? Just remember not to tap on the glass.

I'm giving you an excuse to go to Disney World. You're welcome. If you're a major Pixar fan, EPCOT has a whole section called "The Seas with Nemo & Friends" where there are Nemo-themed rides and a live stage-show of the movie. The Hollywood Studios park has a section called Pixar Place, thats decorated with characters and details from the various Pixar movies, and an interactive Toy Story ride. You'll get over the movies getting pushed back, it's called the happiest place on Earth for a reason. (Disneyland will also suffice, for West Coast Pixar enthusiasts.)

Get Some Tissues and Have A Marathon

Watch all of your favorite Pixar movies in one day, or watch one every week, or have a movie night with friends each month. Just somehow watch them all over the next year and a half. It'll get you excited to see what they come up with next and bide your time until The Good Dinosaur is finally released. Just keep some tissues handy, every Pixar movie becomes a tearjerker by the end, and I'm pretty sure Up was created by scientists as a way to test whether you have a soul.

Excuse me, I just need a minute...

More like this
The 'Hocus Pocus' Sequel Finally Has A Release Date & It Makes Total Sense
By Shannon Barbour and Radhika Menon
What Does The Presley Family Think Of 'Elvis'?
By Arya Roshanian
Kimberly J. Brown & Daniel Kountz Looked Back On Their ‘Halloweentown’ Romance
By Stephanie Topacio Long
All The Sneaky Lindsay Lohan Movie Easter Eggs In Her New Ad, Explained
By Stephanie Topacio Long
Get Even More From Bustle — Sign Up For The Newsletter