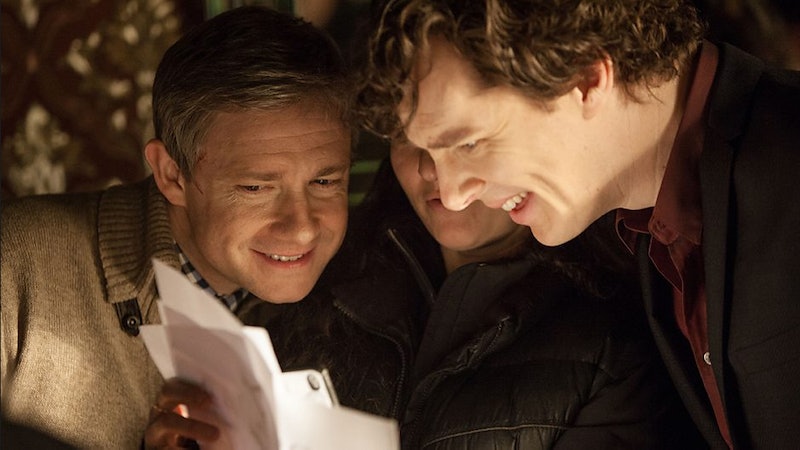 It's been over a year-and-a-half since the season finale of Sherlock's second season aired on BBC, and it feels like it's been so long that we're starting to question whether the show ever actually existed at all or if it was all a fever dream we had, a subconscious manifestation of our desire for curly-haired Brits, long dark coats, and Watson sass. According to these official BBC set photos from Sherlock 's season three, though, it was indeed real, and maybe it'll even eventually actually come back to us.

The pictures (which you can see above and below) are not many, but they're nice little snapshots into filming for season 3, and they give us an excuse to look at some awesome people for a minute. Look how close Benedict Cumberbatch's face is to Martin Freeman's! Look at their little cheerful smiles reading a piece of script that will probably rip at fanpeople hearts the world around! Look at Mark Gatiss in his snappy velvet jacket and that scarf!

You can tell by the number of exclamation points we use in any given article just how long it has been since Sherlock was properly in our lives.

Now if only BBC would announce a premiere date for Sherlock.

More like this
Netflix Shut Down 'Bridgerton' S3 Rumours About A “Very Dark” Storyline
By Bustle
18 Photos Of Jennifer Lopez’s Mansion You Can Now Buy For $42.5 Million
By Alyssa Lapid
Everything To Know About 'RHONY' Season 14
By Jake Viswanath, Alyssa Lapid and Brad Witter
'Bridgerton' S3 Will Show A *Very* Different Side To Kanthony
By Sam Ramsden
Get Even More From Bustle — Sign Up For The Newsletter
From hair trends to relationship advice, our daily newsletter has everything you need to sound like a person who’s on TikTok, even if you aren’t.