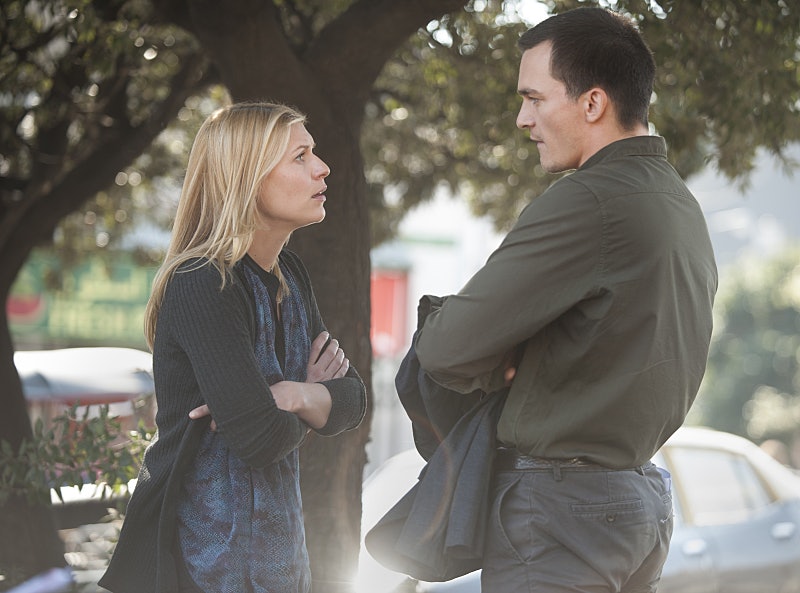 Okay, bear in mind I'm a soft-hearted romantic, but I've been waiting for Carrie/Quinn on Homeland since last season. After all, I'm not the only soft-hearted romantic around — Homeland is certainly a show that loves to ship. This season alone we've gotten Carrie/Quinn, Carrie/Aayan (though I'm not sure that counts as a ship, seeing as absolutely no one wanted it to happen), Carrie/Aasar Khan, Max/Fara, and even Fara/Quinn! That's a lot of relationships to keep track of, and we haven't gotten much Carrie/Quinn play as of late — but Sunday's episode of Homeland definitely teased the possibility of a relationship between the two.

Most of the romantic tension came in the form of Quinn's sophisticated and gorgeous German intelligence officer lady friend/former paramour. As she and Carrie jockeyed for position with each other, there was definitely some rival-isitic, sizing-up going on. Besides, once Carrie was out of earshot, Quinn's contact rather cattily labeled her as "pushy" — and trust me, it was in more of a jealous way than a professional way. Shots fired (though not literal shots — that's something that bears clarification on a trigger-happy show like Homeland). Then, there was the fact that she archly told Quinn, "Your girlfriend left a message" (we wish, eh?). It's not much, but her presence sought to remind us of all the... uh, unfinished business between our two favorite CIA agents.

Do you think we'll be get to see them get together this season? As Carrie pleaded with Quinn not to risk his life near the tail end of the episode, I have to admit it got my heart a-fluttering, but I'm thinking we won't be getting what we want from them. I hate to say it, but we only have one (one!) episode left in Season 4, and there's so much ground to cover (especially the fact that Dar Adal is apparently a traitor). I'm of the mind that we'll see the Carrie/Quinn endgame someday... we just might have to wait another year.