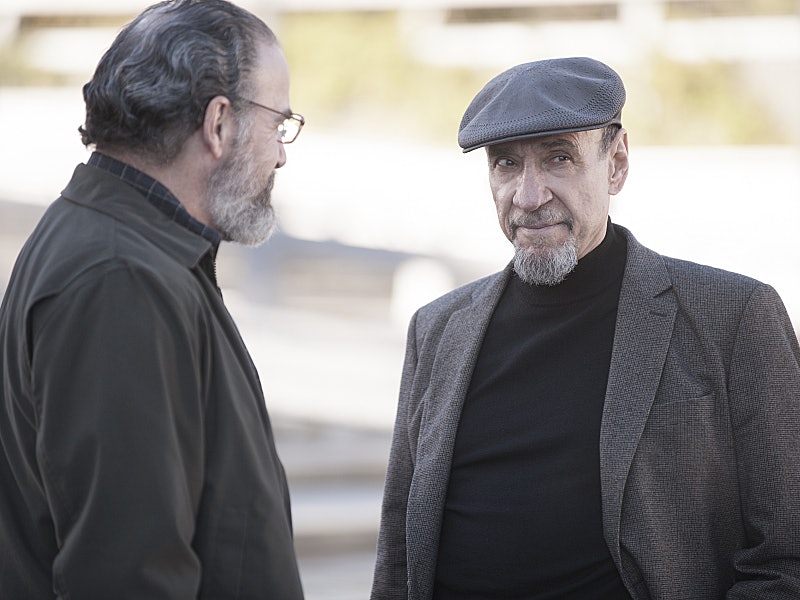 I know that this is a show that thrives and revels by its twists and turns and surprise reveals, but Sunday's episode of Homeland definitely showcased a shock to remember. I'll take your hallucinated Brodys, your kidnapped Sauls, and your AWOL Quinns, and raise you a Dar Adal-turned-traitor. Could you believe it? When Aasar Khan pointed out Dar Adal sitting beside Haqqani in the car, my brain started going haywire with questions.

What does it mean? How long has he been brewing this plan? What implications does this have on the events of last season (does it have any, seeing as we got what was effectively an almost all-encompassing reboot)? Who else is involved? Why does Aasar Khan know about it (and why does he keep helping Carrie)? I have millions of questions and basically no real answers or theories.

Dar Adal, though. Dar freakin' Adal — did you see it coming? I checked out some reactions on Twitter, and some fans are claiming they did, but I categorically did not. Last we saw him was way back in Episode 3, where he seemed more like the fatherly sitcom character who razzes his son-figure about his latest crush (to Quinn: "This isn't about PTSD. It's about your feelings for Carrie Mathison") than someone sinister and untrustworthy. For goodness' sake, he even called Quinn "dear" and offered him donuts! And now we find out he's been playing for the other side?

Go F. Murray Abraham, though: He's going to make a brilliant villain (if his work on a little movie called Amadeus is any indication). I can't wait to see how it all shakes out in next week's Season 4 finale!

I have to say one more thing, though: If Dar does turn out to be working with the Taliban, what does that mean for the show? Out of the gate, Homeland has struggled with its depictions of (pretty much all) its Middle Eastern characters. Most are painted as pretty darn villainous, and the few people on the protagonist's side are usually killed off (ahem, Fara and Aayan), or turn out to be double agents. Sure, there is a ton of moral grey area on both sides, and most of the time, the antagonists are painted in a way we can still sympathize with, but there's a definite, troubling trend here that this Dar reveal only makes more prominent.