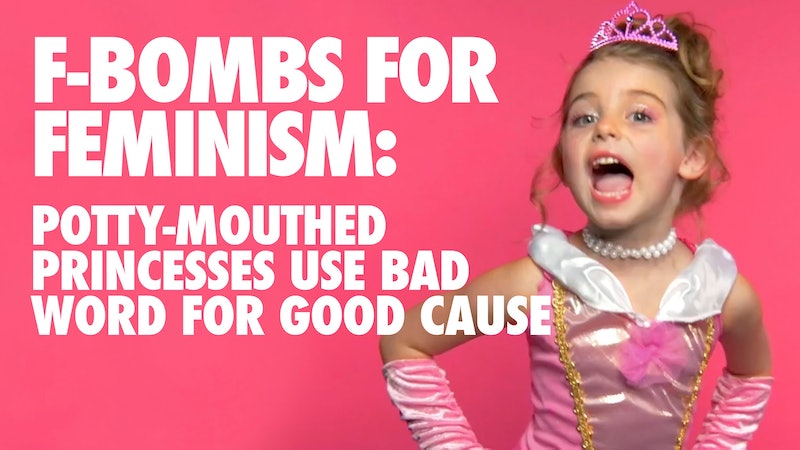 "F*ck you!" "Abso-f*ckin'-lutely!" "F*ck, f*ck, f*ck... Ow, that hurts." "I'm down to f*ck — DTF." "I don't give a flying f*ck." Your retina has just converted rays of light into electrical impulses that were sent through your optic nerve to tell your brain that you've just been graciously presented with five examples of modern-day swearing. Now, I don't know which side of America's political tug o' war each of you find yourselves on, but for some, I'm sure that was pretty f*ckin' hard to read. (Sorry, I just had to do it — I'll try to keep it to a minimum if I can, though it will be... somewhat difficult given the subject matter.) But I do know that all of us, at one point or another — be it on TV in your favorite series, or in school by another "cool" student, or at home by a family member (perhaps accidentally) — have heard many versions of these wonderfully meaningful expressions. And for those of you who winced unpleasantly while reading every f*ck, you've probably just had a mental conversation with yourself that went a little something like this...

You: "But like, aren't all curse words inherently bad?"You: "Because I was taught that cursing is bad."You: "I mean, yeah, curse words are definitely bad."You: "You shouldn't use them, because it makes you sound unintelligent."

You: "And people who talk like that are just uneducated savages with absolutely no respect."

And though I must say it was a riveting self-explanation, I [do not, at all] regret to inform you all that there's a little bit more to the story than what we've been told. As I'm sure you already know (if you don't, read this deliciously critical piece on the evolution of profane language by Slate's "Good Word" columnist Matthew J. X. Malady), it's not as if words haven't been tabooed before and subsequently reclaimed for everyday usage or had their bomb-like properties otherwise eventually defused. But after watching FCKH8's "Potty-Mouth Princesses" feminist video (and their recent "What If Santa Was Sexist" video), starring feminism in the role of "not some helpless pretty f*ckin' princess in distress," and then seeing the many paradoxically on (yet really, really off) topic social media reactions to the many, many problems it supposedly creates (as opposed to what it's meant to be doing and is doing, quite well, as a matter of fact), it looks like Lucy's still got some 'splainin' to do.

If you don't have the time to watch this video (... and you should really find the time, or make it, or steal it, etc.) and its similarly engaging second half, than I'll cut right to the chase for you: there's actually a science to swearing — or better yet, a psychology to profanity. There's no doubt about it. As a Johnstone Family Professor in Harvard's Department of Psychology, Steven Pinker has done his fair share of homework on the topic. He even wrote a few books on it. In The Stuff of Thought (2007), his fifth written work dealing with cognitive science and language (luckily explained in layman's terms), he begins to dissect the neuroscience of sociolinguistic taboos, hoping for an understanding of their social implications, looking for an answer to the "why" and "how" of "bad" words. And it's because of his work that we can distinguish those first five examples of cursing, and their respective categories (from first to last): abusive, emphatic, cathartic, dysphemistic, and idiomatic swearing.

These categories represent different contexts in which profane language can be utilized, each lending itself to grammatical variants of the same root curse word. An abusive swear is meant to intimidate, insult, or in any way emotionally injure the listener. An emphatic swear, normally molded into an adjective, achieves a strong emphasis. The third kind is also self-explanatory — a form of catharsis, psychologically relieving yourself through vocal expression. A dysphemism is the opposite of a euphemism. And idiomatic swearing is accomplished through indirect reference, by not mentioning the subject of conversation. All of these kinds of swearing happen on the daily; mind you, only the first is intentionally harmful to another person.

"We can think of swearing as the use of language as a weapon, to force a listener to think an unpleasant — or at least an emotionally-charged — thought. And that divides the puzzle of swearing into two puzzles: first, what kinds of concepts trigger negative emotions in the minds of listeners? And, why would a speaker want to trigger a negative emotion in the mind of [the] listeners?"

This quote is taken from the lecture Pinker gives in the video, only a 10-minute excerpt of the full hour-lour talk he gave at Warwick's in La Jolie, California, on the content discussed in his The Stuff of Thought. He brings up two really important questions here, not only in regards to "the puzzle of swearing," but also when juxtaposed with FCKH8's potty-mouthed princesses. The first one can be considered in some ways rhetorical; as taboo language has evolved, the concepts that society can or cannot handle have also evolved. This would suggest that today, based on which words are continuously shoved into taboo territory, topics like racism, sexual preference, and, well, just sex in general, retain a negative connotation in the listeners' perceptions — that many of us still aren't comfortable enough to own these words and all of their associations in an act of reappropriation (a very well-known example of such an act taking the form of the word yankee, first coined to be used as a smear on American culture and only after a while reclaimed as a word symbolic of "free person of the New World"), which could only lead to higher revelations in self-worth. "Sticks and stones," am I right?

The answer to the second one can vary with each categorized use of a swear word, but when we stick to the FCKH8 video in question (if you can handle getting through the whole two and a half minutes of "f*cked up facts" without going conservative on me), then you'll realize that the princesses are actually intentionally only taking advantage of one of the five categories of swearing: the emphatic. In other words, all the profanity they use only serves as an emphasis for everything else that they're trying to communicate. They are trying to trigger a negative emotion; they want to get us to listen.

"Well, how does [sexuality] fit into the theory that taboo language evokes negative emotions? Isn't sexuality a source of mutual pleasure? ... Well, it can be, when it's done between consenting adults. But there's a much wider range of circumstances in which people are involved in sexuality, such as exploitation, illegitimacy, incest, jealousy, spousal abuse, desertion, feuding, cuckoldry, harassment, and rape."

"... and rape." Included in that "everything else they're trying to communicate" is rape. The princesses let us know, in their own attention-grabbing way, that one out of every five women will be sexually assaulted or raped by a man. That women are paid 23 percent less for the exact same f*cking work. That it's their future we're creating right now, and that it's looking like a future full of blindly perpetuated isms and subtle oppression. They are speaking out against everything that will affect them when they're older, and against the problems that arise from forcing gender roles, those which have been affecting them since their birth.

Some argue that these little girls are suffering at the hands of leftist exploitation for a quick buck, given that FCKH8 is a for-profit organization — and only a portion of the proceeds from selling their t-shirts goes to charity. And while I can't legitimately disagree with the f*cked up fact that the organization could be harnessing the powers of social media in a way that will lead to the commodification of a large societal issue, I can at least say with absolute certainty that, even if they're profiting from it, they are still making a positive difference, taking a step in the right direction, and bringing up a conversation that still needs to be had with so many young girls who just don't know that they deserve better.

Those children in the video are not being exploited. The sad truth is that those children were just taught about how f*cked up the world is at a younger age and they're not dtf with it, and all the better for them, considering that most of us have to experience it firsthand before we know, because no one talks about it, or teaches it to us... considering that they won't have to go through life half-blinded by their school system and the media and everyone in their life telling them that nothing's wrong, half-blinded by their own belief that it's their fault they're being mistreated. And I saw so many comments on the video, from people who didn't get it, who "didn't understand why they were making little girls curse," all the while debating the validity of what they're saying, as if you couldn't just walk outside right now and just SEE sexual oppression. You literally just watch it happen. It's in the media; it's in the workplace; it's in the f*cking household. In so many instances, women are subjected to some unreal shit... and "so many" is already too much! One girl being raped is already too much.

But, as the video explains, people seem to care less about the atrociously immense gap in wage inequality and rape culture than politeness and the maintained infantilization of children — less about the rights of person than how unbecoming it is that these "poor little girls" are being influenced to curse... which is EXACTLY what the video is calling everyone out on even as they do it anyway. I mean, how f*cking predictable can it get?

You know, maybe it's about time Lucy doesn't have to explain herself and just tells everybody to f*ck off. Or maybe she wants to explain, and play with her dolls, and be a "good little girl." Just remember: whatever she chooses to do, it is her choice. Not yours. Not mine. Hers. So, kids, I think we've learned something very important today: girls just wanna have fun-damental rights. And the current limited edition of profanity is definitely a step in the right (or left) direction. All we have to do now is make sure we can keep up.

More like this
How To Fight For Reproductive Rights, Based On How Much Time You Have
By Courtney Young
Sandra Bullock, Girlboss Extraordinaire
By Matt Harkins & Viviana Olen
10 Times Boris Johnson Got It Wrong On Trans Rights
By El Hunt and Sam Ramsden
How To Protect Your Digital Privacy If You Need An Abortion Post Roe v. Wade
By Kaitlyn Wylde
Get Even More From Bustle — Sign Up For The Newsletter