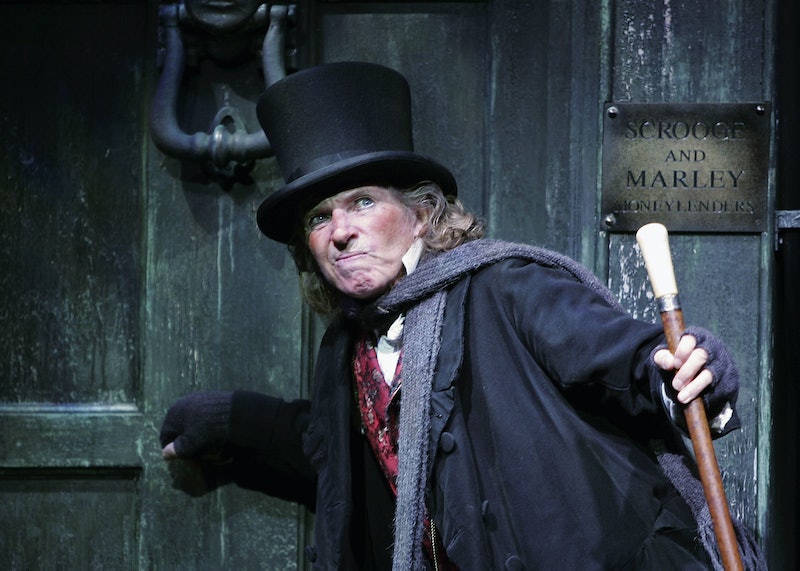 When the holiday season rolls around, we tend to become happier, friendlier people than we are through the rest of the year. Despite the crowds and the packed malls and ruthless bargain-hunters, everything is, like the songs say, merry and bright. There are decorations up on the windows! Carolers out on the streets! Presents under the trees! Come on, people!

Well, OK, maybe it's not universal. Regardless of how we spread our own merrymaking and good cheer, there is always that person. The person who manages to see darkness even in the happiest times. Maybe it's a particularly grumpy grandfather. Maybe it's a persnickety parent, a bummer boss. Regardless of the festivities around them, these people continue to try and bring other people down. They are the Ebeneezer Scrooges in your life, and they need to be visited by some ghosts of Christmases past and future.

These people don't only exist in real life — they're fixtures of literature, too. I started thinking about fictional people who could also do with a visit from old Jacob Marley. So, who's up for a little Christmas cheer, eh?

Miss Havisham was a mean one, Mr. Grinch. True she was bitter after being left at the altar, and who wouldn't be? But to try and corrupt Estella into being as miserable and cynical and she was is a deed unfit even for Scrooge himself!

Holden Caulfield, The Catcher in the Rye by JD Salinger

Has a grumpier, more miserable teenage boy than Holden Caulfield come into existence since The Catcher in the Rye ? Sure some of his rants are well founded, but sometimes you just want to shake the phoniness right out of him. *ghostly chains rattle*

Click here to buy The Catcher in the Rye.

He's everyone's favorite sleuth from literature and TV, but he is by no means the nicest. Antisocial, condescending, and sometimes down right cold, Sherlock Holmes is brilliant, and brilliantly grumpy.

Click here to buy The Adventures of Sherlock Holmes.

When we meet Haymitch, he is the only living tribute from District 12. He's an alcoholic, and he's grumpy and mean as can be. As far as mentors go, he's not the best. Old Ebeneezer may have actually been better. But you have to give it to Haymitch, he had his reasons.

Just like we do with Scrooge (and most grumpy characters, actually), we come to love Snape in the end, but the things that happen before are what land our favorite Potions Master on this list. Every step of the way it seemed that Snape was out to get Harry and his friends, from the first book to the last. Always.

He's old, he's manipulative, he's one father I know I would never want to have. Tywin Lannister wins the Game of Thrones Grumpy Cat contest. If that were a thing.

Peter Van Houten, The Fault in Our Stars by John Green

Was anything more of a let down than Hazel Grace finally meeting her favorite author, Peter Van Houten? NO. OK, he didn't have to have an answer to all of her questions. Authors usually don't. (Unless you're JK Rowling and continue your series long after it ends.) But he didn't have to be so grumpy and rude to a sick teenager who spent years worshipping his work!

Click here to buy The Fault In Our Stars.

The Book Thief wouldn't have been the same without Rosa Hubermann, Mama, to Liesel, snarling "SAUMENSCH" every now and then. But to a terrified child during World War II, a smiling face might have been more comforting than the constant grumpy frown.

Will Traynor, Me Before You by Jojo Moyes

Will is young, he's rich, and he's used to being in control. This charmed life ends when he is hit by a car, and confined to a wheelchair for the rest of his life. Will becomes nasty, cynical, and grumpy to say the least. He is unable to keep a nurse because he is so off putting. Will is unlikeable throughout the book, becoming something of a modern day Mr. Darcy. See above.

Sassy might almost be the better word for Minny, but she is definitely not taking anything from anyone. She is stubborn, bossy, and suspicious even among her friends. One of the best grumpy characters ever, Minny will be having none of your... well... the gif says it best.