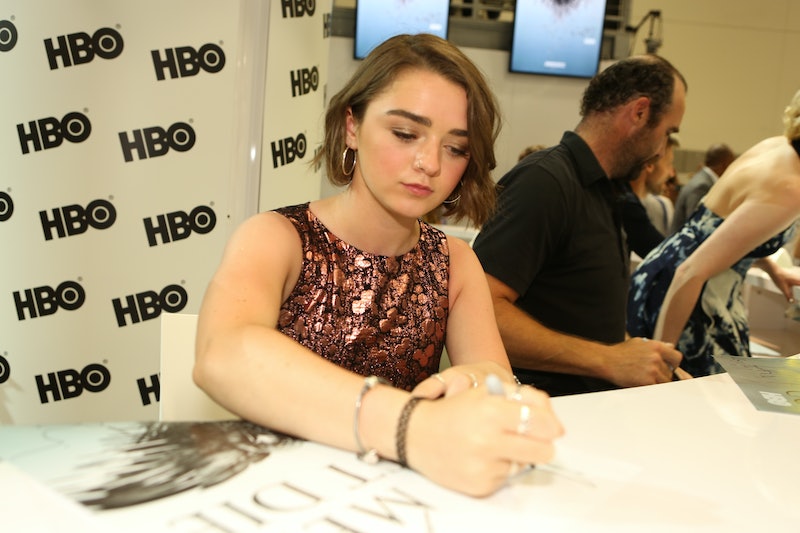 Well, I already have to begin by saying that I find this news incredibly disappointing. When Emma Watson made her U.N. speech about feminism and the #HeForShe movement, it was, I think, one of the best moments for feminism in young Hollywood. Although Watson had her detractors, there were just as many voices lifting to either support the movement or praise her for her eloquent, powerful, and life-changing words. Game of Thrones actress Maisie Williams was one of the numerous celebrities who supported Watson, but now it appears her support wasn't unconditional. In a recent interview with The Guardian, Williams criticized Watson for her "first world feminism," and, in doing so, sort of undermines the point of Watson's speech.

"There are creepy things that people say online that I shouldn’t have to read, but there are bigger things going on in other countries," said Williams on the subject of feminism and why it's not a top priority for her. "A lot of what Emma Watson spoke about, I just think, 'that doesn’t bother me.' I know things aren’t perfect for women in the UK and in America, but there are women in the rest of the world who have it far worse."

It's not as though Williams doesn't have a point. There are huge problems and setbacks in women's rights that are going on in other countries, all of which are deserving of attention. However, to state that women's issues in the U.K. and America aren't worth pursuing or paying attention to because women in other countries have it worse is really missing the point. For all of its beauty and wonder, the world is a deeply flawed place that's full of more problems then we have significant crowds of people to deal with. Instead of trying to fix every single problem in the world, most people find it more manageable to focus on the issues that they can fix or that are important to them.

Quite honestly, you can support Watson's U.N. speech, and her message, without turning your back on the feminist issues that are being raised in other countries, among other ethnicities. In fact, that's particularly unfair to say of Watson's message since it was all about inclusivity — specifically the inclusion of males into a movement they have traditionally felt isolated from or threatened by. That might not be the most important issue in the world, but it is an issue, and to devalue it by comparing it to other women's issues in the world that still have a long way to go does a disservice to the entire movement. In first-world countries, women are still being paid less than men, being represented in media less than men, being treated as less than their male counterparts in ways that are both subtle and overt.

The word "feminism" still carries a stigma that prevents the movement from gaining any worldwide traction, as many women continue to be hesitant to identify with the word. Just because we have the right to vote and aren't considered the property of the males in our lives doesn't mean that things are so hunky-dory that we should stop fighting for equality in our society. And supporting the feminist movement doesn't mean that you can't support other feminist movements worldwide, and it certainly doesn't mean that you are turning your back on other women's issues that also require your attention. Ultimately, I refuse to undermine any women's issue by saying it's inconsequential on some kind of global scale of sins. And, of all the criticisms that could be made about Watson's U.N. speech, it's very disappointing that Williams chose this one.