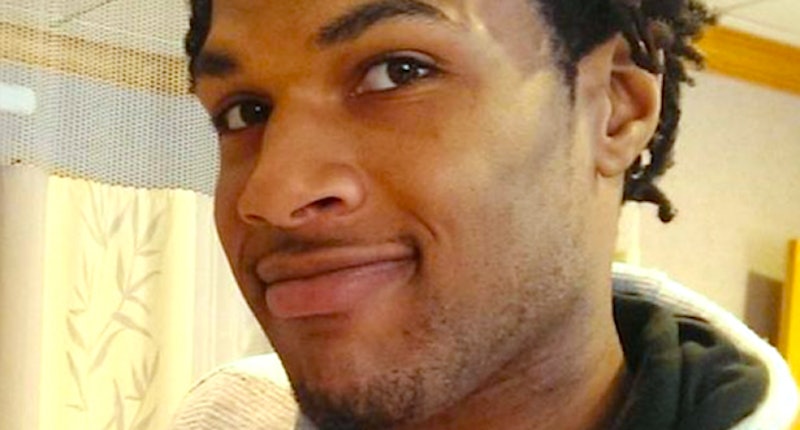 You've almost definitely heard the names of Michael Brown, Eric Garner and Tamir Rice lately — three people who all lost their lives in fatal police encounters sparking widespread protests against police violence. Not to be forgotten on that list, however, is John Crawford III. Crawford was fatally shot in a Walmart in Ohio while carrying an airsoft pellet rifle. Now, video obtained by The Guardian reveals that police interrogated John Crawford's girlfriend for 90 minutes before telling her that he'd been killed.

Select portions of the video released by The Guardian illustrate an accusatory questioning of Tasha Thomas, with the detetctive even accusing her of being high on drugs during the interview.

Released by the office of Ohio attorney geenral Mike DeWine in response to The Guardian's public records request, the footage is rather difficult to watch. Detective Rodney Curd grills a frequently sobbing Thomas repeatedly about whether Crawford had carried a gun into the Walmart with him, repeatedly accusing her of lying, and suggesting that Crawford might have been planning to murder the mother of his children, LeeCee Johnson, who he was talking on the phone with when responding officers shot him. Curd even offered a scenario for Thomas to confirm or deny: "Did he ever mention ‘I’m going to shoot that bitch’ or something like that?"

Curd repeatedly accuses Thomas of lying about whether Crawford took a gun into the Walmart, even threatening her with jail if she didn't "tell the truth," a line of questioning which is somewhat surreal considering the facts of the case we all now know. Crawford was carrying an unpackaged pellet rifle that he picked up off the shelf inside the Walmart, which spurred another shopper to call 911, initiating the fatal encounter.

The most heartbreaking reported moment on the video, however, which The Guardian did not present, is what happens at the end of the questioning. Curd finally revealed to Thomas, after 90 minutes, that Crawford is dead, all while laying the blame at his feet: "As a result of his actions, he is gone."

Make no mistake, it's easy to watch this video and come away with a negative impression of Detective Curd's attitude, even though it must be conceded that police sometimes need to question people in a hostile manner to suss out relevant information. And it's not entirely clear whether he's being level with her or not about what he knows — the interview reportedly occurred in the immediate aftermath of the incident, and he suggests he's not entirely clear what happened, operating under the (entirely wrong) assumption that Crawford brought the gun into the store from the outside.

Indeed, according to The Guardian, Curd later told investigators he was unaware that Crawford was only armed with a pellet gun, and that it was a model sold inside the store. If true, this is concerning on its own — it certainly sounds like the sort of thing the police ought to know after they shoot somebody and have an airsoft rifle laying on the ground nearby, but call me naïve if you will.

But regardless, Ohio is one of those "open-carry" states, which means Curd's desperation to establish that Crawford had carried a firearm into the Walmart wasn't even a matter of discovering an illegal act. Even if the gun had been real, which it wasn't, and even if Crawford had brought it in from the outside, he would've been entirely within his legal rights to stroll around the aisles with it in hand. In a story full of tragedies and criticisms, this one has gained some steam — the notion that open-carry doesn't really exist for black men.

The question of whether criminal charges will arise in the Crawford shooting, however, has already been settled. Just as in the Michael Brown and Eric Garner deaths, a grand jury declined to indict police officer Sean Williams for Crawford's death, despite the fact that grand jury non-indictments are staggeringly rare, making up just over 0.006 percent of such outcomes in 2010. To be clear, if 2014's data were the same as 2010's, the grand juries considering the cases of these three slain black men would account for more than 25 percent of the year's total non-indictments.