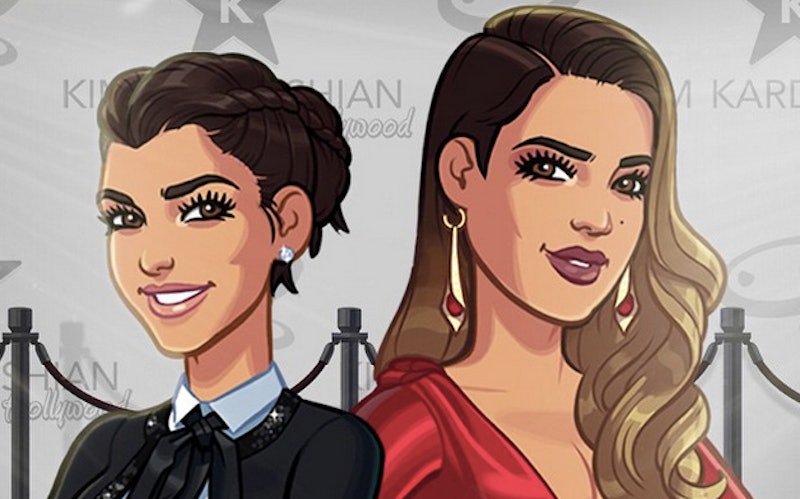 When Kim Kardashian announced that her sisters would be joining her iPhone game, I was so excited. But that announcement came a week ago and many players have yet to come face to face with the rest of the Kardashian Klan. So when do you get to meet Kourtney and Khloe in Kim Kardashian: Hollywood? It all has to do with how far behind you are in the game.

It turns out a lot of people deleted the game after a few months of addicted playing. I don't blame them, it did get kind of boring after awhile. Although I still played from time to time I found myself letting more and more days come between my last log in. I did get re-energized when Kris Jenner was introduced to the game. But then Kris had a event she wanted me to do and I had to wait a day for it to become available...so needless to say I got a bit lazy about playing again.

But ever since Kourtney and Khloe's participation was announced, I've been back to my regularly scheduled addiction. I love those two sisters and I really wanted to hang out with them, even if it was only digitally. Unfortunately it took me an entire week to be graced by their presence because it turns out their appearance has nothing to do with what day it is. Unlike Kris Jenner, whose arrival was planned for December 1st, meeting Kourtney and Khloe has everything to do with how often you play.

So if you're one of those people who deleted and restarted only to meet the Kardashian sisters, you might have awhile to go before you get to meet them. You'll have to go through all the game's other tasks first like being discovered by Kim, working your way up in the modeling world, getting an agent, etc.

For those of you who may not have deleted but have been a bit lax in their participation, things will be easier but still not immediate. In order to finally have Kourtney call me I first had to actually complete all the AIDS awareness events (even though they were meant for December 1, World AIDS Awareness Day).

Moral of the story is that you should try to zip through your events so you can catch up and meet Miss Kourtney herself because once she calls you, she is a riot.

She shuts Willow Pape down like no one's business.

And then hires you to help launch her Klassic Kollection clothing line.

But when do you get to meet Khloe? Her appearance comes a little while later. First you have to appear in a photo shoot and go to a store promotional event for Kourtney, and then Khloe will call you up to help model for her K-Star Kollection. (It's ghetto-fabulous.)

After you complete a photo shoot for her, then she'll deign to meet you.

It's very Khloe to make you work first before she'll agree to hang out with you, but I'll take it. Especially since she totally slammed my other nemesis Crystal Fletcher. Don't mess with Khloe.

You want Khloe on your side because just look what happens when she's your friend.

Move over, Kim. Khloe is now my new inspirational motivator.

And for those of you who are feeling like you'll never catch up in time to meet the sisters, don't worry. Kourtney is scheduled to have a holiday party on Christmas that you're guaranteed access to as long as you log in that day.

So you'll get to meet the Kardashian sisters then, if not sooner! And no matter when you do get to meet them, it's sure to be epic because this sisters are the best in real life and in digital form.