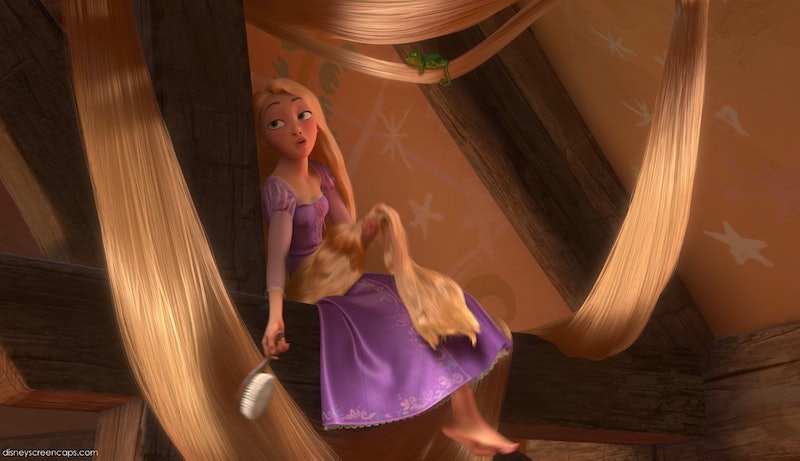 Aside from the occasional trim from my mom in the bathroom sink, I did not get my first haircut until I was 14 years old. I wasn't trying to make some kind of statement, it just never really occurred to me to cut it. And at a certain point, I grew weirdly attached to the dead cells growing out of my head. I was also really terrible about maintaining it in any orderly fashion (my mom's vigilance is the only reason I didn't go to middle school with giant knots on my head) and didn't know much about hair styling in general, so I was a bit weak on the upkeep, which is how I know about the struggles of having long hair.

Since the Big First Haircut, I've let my hair grow out really long before cutting it again, and every two years or so I relive the exhausting circus of making it look presentable every day and getting bizarre comments about it ("Oh, so that's what it looks like when you don't blow dry it? No, no, I love it!"). Right now I'm in middle of the exhausting process of growing it back out, and if I stick to the unintentional schedule, I'll get fed up with it and cut it again in Spring 2016. That's just how it goes. People with long hair are probably familiar with that life cycle. They are also most likely familiar with dealing with all of the following:

Your hair is constantly getting stuck in blow dryers

That blow dryer is after you. You're convinced that it actually thinks and wants to hurt you by sucking your hair into it.

It's funny the first time it happens to you, and then decidedly unfunny the next 6,884,920 times.

Actually, your hair gets sucked into pretty much everything you can think of

Washing machine doors, lane lines of pools, the mouths of innocent passerby. It's unfortunate, but nothing surprises you now.

Whenever someone tries to run their hands through it, they are always awkwardly unable to

My face might be permanently stuck in a cringe remembering all the times people have tried to either platonically or romantically run their fingers through my hair, only to get awkwardly stuck by one of the many, many secret knots. This thing only looks silky smooth—it's actually a secret nest of tragic tangles.

You crave that perfect, beautiful balance of shampoo and conditioner, but no matter what you do nor how carefully you conserve, that day will never come.

You are constantly finding things in your hair that don't belong

Your ponytails look like they're having an existential crisis

Your hair is so heavy that the top of it always droops like a wilting flower. Such melancholy. Very ponytail.

No matter how much you brush, you'll always find that one surprise knot

And it's the apocalyptic, whine-for-your-mommy, HOW IS THIS A THING THAT IS EVEN ATTACHED TO ME? kind of knot.

Your hair will never romantically blow in a breeze

With long hair, it either doesn't move at all or the whole thing creates a violent, whipping curtain that will make everyone within a five-foot radius around you duck for cover.

You occasionally wake up in the middle of the night gasping, strangled by your own hair

It's a real thing.

Babies LOOOOVE to pull it

Your hair is almost as exciting as their mommy's cell phone, and SO much more accessible!!

You can't get away with skipping showers pretty much ever

What is it about long hair that makes it such a grease magnet?!

It's near impossible to get any volume in your locks

Oh, well. Only six more cans of hairspray until something sort of happens to it.

Also, you're so used to getting static-shocked by now that intensive shock therapy would literally do nothing to you.

Sometimes people like to use your ponytail as a leash

This was only handy the one time a friend used it to stop me from walking out into traffic.

THIS IS SERIOUS BUSINESS. For other people, growing out their bangs will take a few months. For you, it will take many, many years, or basically the equivalent of earning that college major, so the stress is justified.

You shed all over everything and everyone you love

My poor, poor college roommates. No apology will ever be enough.

More like this
How To Master Baby Braids, According To TikTok
By Tomi Otekunrin
Coco & Eve’s Just Launched Its First Ever Leave-In Conditioner
By Tomi Otekunrin
Ombré Hair Is The Lower-Maintenance Way To Play With Color
By Paris Giles
Millie Bobby Brown's Blonde Hair Is Very Britney Spears Circa 2002
By Paris Giles
Get Even More From Bustle — Sign Up For The Newsletter