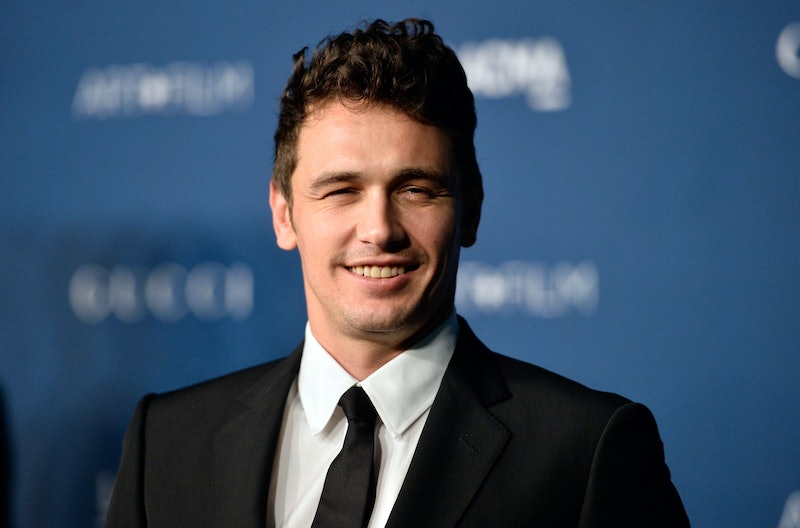 It's impossible to turn on your television, open a newspaper, or scroll through your Instagram feed without being accosted by the many faces of James Franco. He's here, chatting with Bustle about his film, The Color of Time , he's there, permeating your pupils with a barrage of selfies, he's everywhere — filling cinemas with buddy comedies, and playing professor with the students at NYU. And throughout his noble attempt at total world domination, Franco's latest projects have all helped propel the works of other aspiring creatives — mainly, women.

So, is James Franco a feminist? I asked Franco about his feelings surrounding the 'F' word, and if he considered himself one:

"Yeah," he said. "For a lot of reasons. One thing I'll say right now is that over the past few years I've worked with a bunch of female filmmakers, and I've come to enjoy the experience. I look for women to work with on every project, and if there's not enough women I insist on hiring them," he said, rattling off a long list of hard-working female directors he's worked with recently, including Palo Alto's Gia Coppola and Anna D. Shapiro, the director of the on Broadway adaptation of Of Mice and Men.

"I find that I work with women really well. These have been such great experiences. I wouldn't say only because they're women they're great filmmakers and directors, but there is something about the energy that I really love and want more of," he reveals. "There is such a disparity between male directors and female directors, and the number of females who have ever been nominated for awards is vastly smaller than males so I'm happy to give them a push. They are owed it, they are just as good as any man, so if I can help in any way, I do." he says, before adding: "But I also do it for selfish reasons because I really enjoy working with female filmmakers."