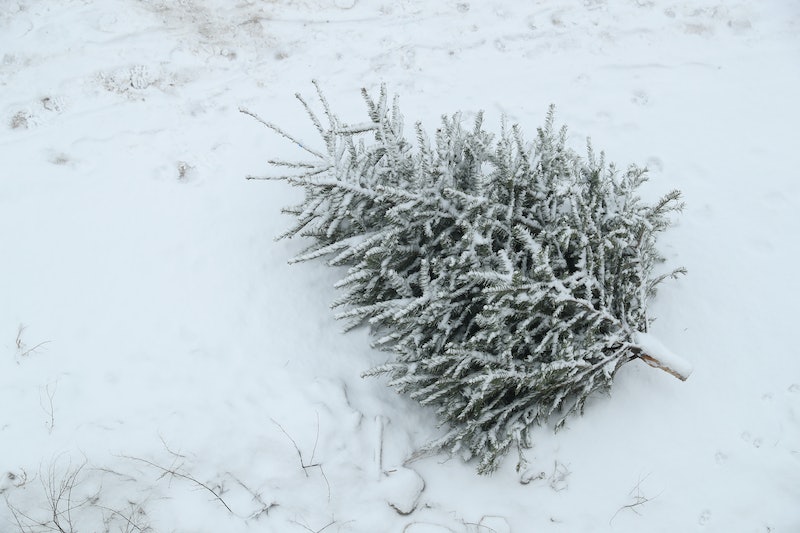 Remember how magical the holiday season was when we were little? From Thanksgiving to New Year's, the world was full of elves, apparating presents, twinkly fairy lights, and, of course, books about mythical and miraculous happenings. The holidays are still pretty enchanting as an adult, but they're also super-stressful; as awesome as gifting is, it's a little hard on the wallet. Fortunately there are plenty of mystical, magical adult books to transport you out of the seasonal insanity.

The reality-defying books on the following list won't take you to the North Pole, but they will take you far away from the homicidal holiday shopping crowds, the endless parade of friends and relatives, and the sad reality of your dwindling bank account balance. Even if you don't believe in the existence of that jolly elf anymore, getting lost in a magical book will help you recapture the delightful feelings of Christmases past. Plus there will be a healthy dose of grown-up material to keep you hooked.

So get ready to mentally leave the holidays behind and book-travel to a magical land of your choosing. There's no shame in indulging in a little reading time during the seasonal craziness, (it's definitely smarter than overindulging in the spiked eggnog) and, in the true holiday spirit, when you're done you can regift the little sanity saver.

The Magicians by Lev Grossman

The Magicians is the first novel in Grossman's lauded trilogy that concluded this year, and if you have the time (or a place to hide) I would highly recommend just reading all three. For those of us who grew up with The Boy Who Lived, the premise of the novel sounds vaguely familiar: Quentin Coldwater, a college-aged boy, has an unshakable obsession with Fillory, the magical landscape of a beloved children's book series. "Obsessed" is a strong word, but I admit that I can totally relate. I'm still waiting on one of these:

Anyway, Quentin actually does end up at a school for magically gifted kids (not fair!) and the adventure begins. It kinda sounds like a mash-up of The Chronicles of Narnia and Harry Potter, but the subject matter (swearing, occasional sex, and lots of existential crises) is definitely intended for a mature audience. Although Quentin seems like a totally average guy, his magical journeyings are anything but, making for a relatable, yet fantastical, tale. So enjoy your escape to Fillory. You won't want to come back, either.

The Golem and the Jinni by Helene Wecker

This incredible novel is a kind of historical-fiction-magical-realism-fairy-tale hybrid. Although the setting (New York City circa 1899) is not some fantastical made-up place, the characters who inhabit it certainly are. Chava is a golem, a creature made of clay, created from dark Kabbalistic magic by a Polish rabbi, and then left on her own after her master dies on the ship to America. Ahmad is an ancient Syrian fire being, a jinni. After being trapped for centuries in a copper flask, he's accidentally set loose by a tinsmith in lower Manhattan. The two become unlikely friends as they try to pass as human in the throng of immigrants that flood the city from all corners of the world.

I know, this sounds like a crazy premise, but this is a beautifully crafted novel. You'll be totally immersed in the descriptions of the Big Apple at the turn of the century, and in the stories of Chava and Ahmad — how they find each other, and, ultimately, how they come together to face down a dark and ancient evil.

A fun, fast read, perfect for post-feast downtime. Personally, I love a story that starts out with someone in a totally normal life situation, and ends with said person in some fantastical, magical land. Because that means it could still happen to me. For aimless grad student Nora Fischer though, things are not so simple and delightful in fairytale land. After accidentally stepping through a portal at a miserable wedding, she finds herself in an enchanted world where everything and everyone is beautiful.

But things get weird fast, and Nora has to figure out just what it is that she really wants. She won't survive long enough to figure it out though, unless she can pick up some serious sorcery skills in a hurry. Luckily Nora is a smart girl, and the magical hijinks ensue. After finishing this one you'll be up all night searching for the "portal" in your backyard.

The Ladies of Grace Adieu by Susanna Clarke

Clarke's previous novel, Jonathan Strange & Mr Norrell , is much more well-known that this slim volume of fairy tales, but I find myself turning again and again to this collection. Plus it looks gorgeous on a bookshelf. These eight stories (several of which were previously published) will take you back to the fairy-crossed world of Clark's 19th century England, and some familiar characters make appearances, including the aforementioned Jonathan Strange. All of these lovely little gems contain Clarke's characteristic blend of historical fact and magical fiction. My favorites are her interpretations of classic fairy tales like Rumpelstiltskin, mostly because her clever damsels in distress usually find a way to save themselves. Bring this satisfying little collection along to one of those epic family gatherings where you can steal a few minutes of reading time in a guest bedroom or coat closet.

I've been dreaming about running way with the circus my whole life. (I'll work the trapeze, please). Maybe, as my boyfriend says, this is just one manifestation of my reluctance to get out of my imagination and into the real world, but whatever. I'm a reader: We live in our heads, right?

The main character of the the novel is the big top itself, Le Cirque des Rêves and it is, literally, the circus of my dreams. Morgenstern describes all her work as "fairytales in one way or another." While The Night Circus falls into that category, it's a dark, deep magical world that she takes us to. This novel isn't your typical fairytale, there are no white knights, or sleeping princesses, or "love conquers all" happy endings. The Night Circus is about magic. And the circus. If you love those two things, you'll love this book.

So, this Hugo-nominated book is bananas. I'm not even really sure how to classify it, but I'll just say there are steampunk/fantasy/cyberpunk aspects. You'll need a good chunk of uninterrupted time, and a whole lot of peanut brittle to get through Miéville's incredibly imaginative creation, but it's worth it. Oh-so worth it. The scope is Dickensian, the setting is utterly unique, and the action is nonstop. Get ready for dirigibles, ginormous insects running riot, actual riots, political intrigue, sex, love, scientific breakthroughs, criminal activity, aliens, torture... the list goes on and on. Oh, and here's a little gift for you: it has a sequel. Merry Christmas.

This list would not be complete without a Gaiman title. He is essentially the leading magic man of literature. American Gods is one of his earlier works, and it remains an all-time fav. I have to admit that I originally picked it up because of the title (who can resist that epic, gothic title?), and it turned out to be a very fortuitous impulse buy. I'm usually annoyed me when people describe novels as ambitious, but I believe that in this case it fits, because American Gods is about the nature of belief — why we choose to believe in certain truths, religions, gods, politics, people, etc. So it is kind of an ambitious undertaking (here's hoping the TV series does it justice).

Readers follow Shadow and the mysterious Wednesday (who's actually an old god, once known as Odin the All-Father) on their journey across America, rounding up all the forgotten gods so they can do epic battle against the upstart deities of the Internet, credit cards, and other modern conveniences. American Gods is a perfect read for the holidays (all that mythology and consumer-culture bashing,) but be forewarned that it may force you to perform some uncomfortable examinations of your own relationship with the "upstart deities."

One Hundred Years of Solitude by Gabriel García Márquez

You've probably already devoured this one, but anytime is a good time to reread Márquez. He's my go-to author when I really just need to get out of my head (or house) without leaving the comfort of the sofa. This novel set the standard for magical realism, as Márquez deftly interweaves the supernatural with the everyday, vividly bringing to life the jungle settlement of Macondo. The gorgeous language and masterful storytelling will effortlessly transport you to Márquez's lush, vibrant world.

Of Bees and Mist by Erick Setiawan

This little gem of a novel will make your domestic family dramas seem downright cozy. Set in a mythical town where witchcraft, spell casting, and prophesying are everyday occurrences, two rival families fight for control. Meridia falls in love with Daniel and abandons the cold, mist-filled home of her parents, only to discover that her mother-in-law is an evil, manipulative woman who controls her family with supernatural power. Meridia's own family joins her side to fight the rotten woman, and the stage is set for a lifetime of epic battles. The magical aspects of this fable are lovely and haunting, but it's the genuine, heartfelt relationships between the characters that truly make it shine. After experiencing the way this family comes together to support Meridia, you might just be ready to rejoin your own relatives. After all, nobody's got your back like the people who have to love you, and that's what the holidays are all about, right? Right.