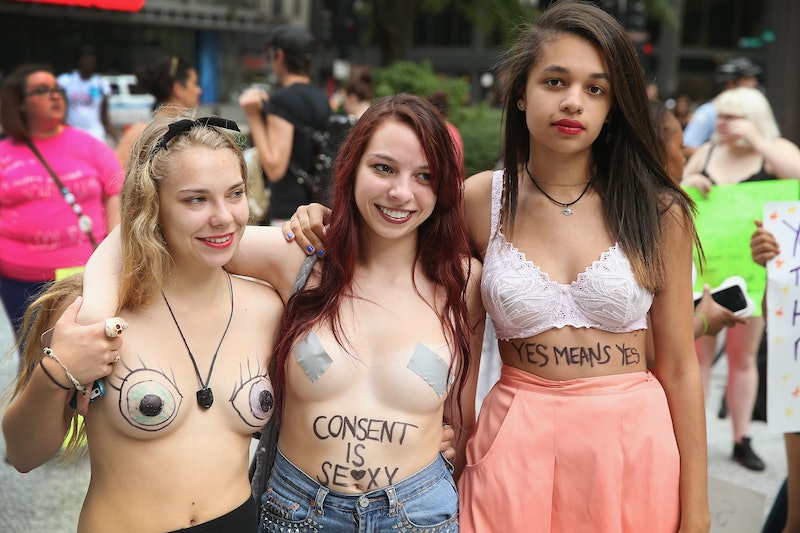 Let me begin by saying that being naked is great, and feeling comfortable naked is even better. I’m not a prude, a zealot, or some antiquated curmudgeon who thinks women need to deny their sexuality and always be clothed from nose to toes. I am the first to call bullshit when celebrities like Jennifer Lawrence endure slut shaming when their 100 percent private, consensual nude photos are leaked to the public. I would even argue that nudity alone says very little about a person beyond a lack of cloth.

So, if I were master of the universe, people could do as they please with regards to their showing of skin. [You want to be naked in the diner — OK, fine — just make sure to wipe down the booth with antibacterial gel before you leave. Done deal.] That said, we don’t live in the vacuum that is my ideals — a mystical, magical place where people of all sizes love their bodies and do not attach shame to their wobbly bits.

Instead, we live in a world where bodies matter. Our bodies dictate how others perceive us. How we dress, how we cut our hair, the color of our skin, our gender, the size of our ass — these are all factors that people make assumptions about; factors that are open to interpretation. Our bodies are our unspoken communication with the world. This makes them political. This means that every time we get dressed — or undressed, for that matter — we are making a statement of some kind.

When you're a woman, choosing nakedness can be linked to a whole lot of really intense stuff — such as vulnerability, sexual objectivity, sexuality, slut shaming, consent, desirability, beauty — and that means that getting naked or nearly naked in public or in front of a camera can mean different things at different times. Honestly, most often when we see naked women in photographs we are being asked to acknowledge them as being emblematic of either beauty or sex, and therefore, editorial photographs have become a part of the way that we decide what is beautiful or sexual.

This link between photos of naked women and our ideas about what is beautiful and sexy has it's ups and downs. For example, sometimes naked women in photos are presented as sex objects. When we say that a woman is a sex object, what we mean is that she is only viewed and understood as the passive recipient of others' desire rather than as a unique individual with a complex personality and desires of her own. Consider all the advertisements where women's bodies become props to entice the sale of everything from perfume to denim; from beer to burgers. In the real world, many people take this a step further and correlate sexual objectification and sexual consent. Hence, the whole "short skirt, deserved it" nonsense.

This idea — the accepted view that naked women's bodies are best understood for the viewing pleasure of others — is ridiculous. But because it exists, female nudity that counters the norm can be truly revolutionary.

For example, we have an image like that in the header of this article, or like the one below:

The women in these photos are attending "slut walks." These are women who choose to be naked, or nearly naked, not so that others will consider them beautiful, but because they want to overturn the idea that female nudity can be equated with sexual consent. Their nudity is literally an act of defiance. In this case, the nudity is not one dimensional. These women aren't objects; they're subjects. They're active, ballsy and brazen. Their nakedness isn't saying, "Come hither, I'm yours." It's saying, "This is my body, and I have every right to be naked. I have every right to strut down the street, boobs out, without you thinking that my nudity functions as a free pass." Period. This is a whole different kind of nudity. And honestly, it's much more powerful.

When it comes to nakedness and questions of beauty, most mainstream images of nude or partially nude women adhere to our culture's stringent beauty ideals — which are most often presented as hyper-thin, curvy, and white. Unfortunately, this ideal dictates many women's understanding of their self-worth. Basically, women take in thousands upon thousands of images that feature one type of person, and this sends the message that if they don't meet this ideal that they are seeing then they don't deserve to be seen; and they certainly should never be naked in front of a camera. Images of female nakedness that challenge this ideal are fierce, and most defiantly radical. Consider the work of Substantia Jones of The Adipositivity Project:

In this case, the nudity is empowered because it spits in the face of the social moray that says fat women should be invisible — that their naked bodies are too grotesque to be looked upon. The nudity in the images from The Adipositivity Project are, again, an active statement. They say, "Look at me. See me. Know that I'm human, that I exist, and that I refuse to be invisible. Know that I can be beautiful — that beauty doesn't have to be limited and hollow. Know that it can mean so many things." This is a radical act and a revolution against an oppressive beauty regime. These images of nudity are powerful because they are not just asking the viewer to look, but also to think and to change.

I guess what I'm trying to say is that nudity is culturally charged — particularly when it comes to how cultures envision women. And as far as I'm concerned, we should use that charge to reshape ideas about woman's beauty and sexuality. This doesn't mean that we can't ever be sex objects — or that being a sex object is a social plague. It just means that in addition to those visions of female nakedness, there are some other, and perhaps more powerful and empowering, ways to be nude.

So yeah. Sometimes being naked makes you a badass.

More like this
Most Comfortable Underwear For Big Butts
By Audrey Williams
We’ve All Had Bad Sex. Nona Willis Aronowitz Is Talking About It.
By Sophia Benoit
42 Black Owned Fashion & Beauty Brands To Support Today & Always
By Mekita Rivas, Shea Simmons, Kui Mwai and Dominique Norman
Are Skater Shoes the Next Y2K Trend to be Revived by Gen Z?
By Lauren Alexis Fisher
Get Even More From Bustle — Sign Up For The Newsletter