Although 2014 has been something of a fraught year, one of the best things to come out of it has been the continuing conversation about body image and body positivity. We still have a long way to go, but we’ve made a lot of progress toward challenging unrealistic beauty standards and embracing all body shapes — and as one year rolls over into the next, photographer Victoria Janashvili plans to add to the conversation in a big way. She’s launched a Kickstarter campaign for Curves, an art photography book that celebrates body positivity in all its glory. Both the project and Janashvili’s work are well worth a moment (or several) of your time, so here — have a peek.

Janashvili, who was born in St. Petersburg, Russia, studied photography at the London College of Fashion and currently lives in New York City. She’s been working in the fashion industry for seven years, both assisting some of the greats in London and Paris before striking out on her own in New York. Her work has been featured in publications ranging from GQ to Cosmopolitan and from Esquire to the New York Times; she also always has a few personal projects in the works, like Curves. “I feel very happy that the fashion magazines and media in general [have] started to embrace…healthier images of a ‘beautiful woman,’” she writes on her Kickstarter page, “and that is why I strongly believe that this art book can help make a change even more.”

The photo shoot featured on the Kickstarter’s landing page, which has also been all over social media, stars plus-size models Denise Bidot and Marina Bulatkina, with whom Janashvili has collaborated frequently in the past. According to Cosmo, both models are “outspoken advocates of ‘self-love'”; Bidot also made waves during New York Fashion Week by becoming the first plus-size model to walk multiple runways for straight-size brands. With makeup and body paint by Anastasia Durasova (assisted by Jna Vilaneuva) and hair styling by Lazarus Douvos, Bidot and Bulatkina look positively stunning. The whole thing is a glorious celebration of body confidence and the human form, and I absolutely love it.

“Even though the average American woman is a size 14, our society continues to set stereotypes as standards when it relates to the real body image of women,” said Janashvili in a statement. “This is why I spent years of my time taking pictures of different types of models and took part [in] numerous ‘body-image awareness’ campaigns that went viral and caused lots of discussion. Through my book, I would like to continue to spread the mission and break social stereotypes, so we can take a stand on women feeling confident within their own skin.”

Although Curves focuses on — well, curves, the idea behind the project is positivity with regards to all shapes and sizes. “We like booty,” the Kickstarter’s introduction reads. “We like your booty. We like curves and boobs and hips and bodies. We love bodies. We love women’s bodies, whether they are skinny, full, flat, athletic, old, young, black, brown, white… But not everybody does… Because not everybody knows how beautiful bodies truly are!” The goal, then, of Curves is greater than the sum of its parts: An important contribution to the ongoing conversation about body positivity, it hopes to introduce new lines of thought, realigning how we think of and discuss beauty. I don't know about you, but I can’t wait to see the book in its finished form.

As of this writing, the Curves Kickstarter campaign has earned $3,351 of its $37,500 goal; if you’re curious about where all that money will go, Janashvili has included a breakdown of what the funds will be used for. The biggest expense is (obviously) the printing, which calls for $18,000; other costs include those required for an editor, a book designer, shipping, Kickstarter and Amazon fees, and studio expenses. Incentives to donate range from a mention on the “thank you” page of the finished book ($2) to five copies of Curves signed by Janashvili, Bidot, and Bulatkina, a thank you mention in the book, postcards featuring some of the photographs, and an invitation to the book launch party in New York in the spring ($1,000). Every bit helps, so head on over to the campaign’s page if you want to kick in a little, or a lot — and check out the video below for a behind-the-scenes look at the body paint shoot: 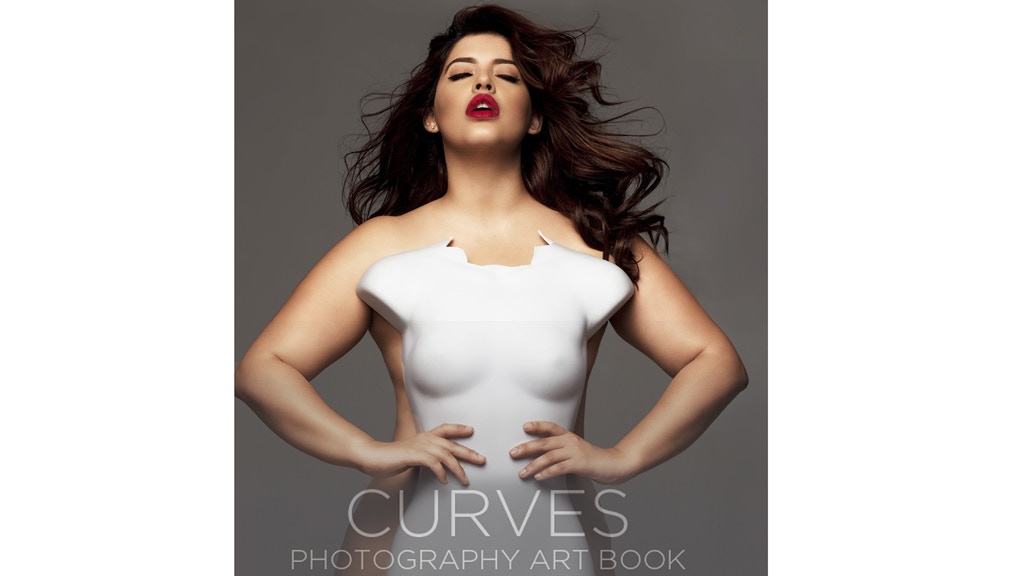