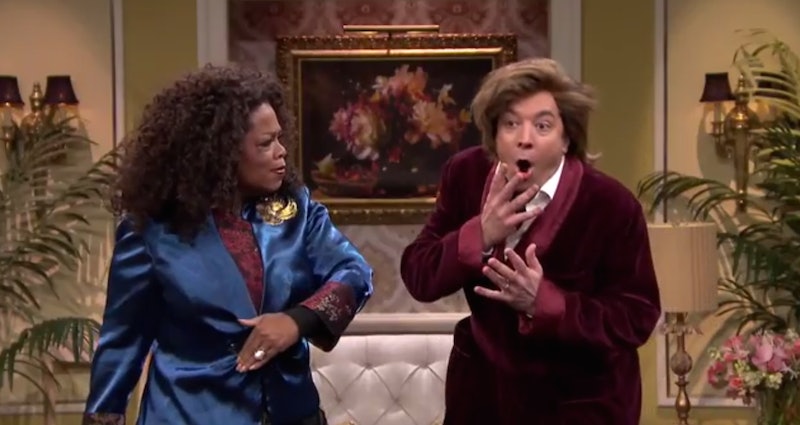 Little known fact! Amongst the great moments that came from Oprah Winfrey's appearance on The Tonight Show Starring Jimmy Fallon on Monday, one of the greatest was undoubtedly finding out that, back in the '80s, Fallon and Winfrey were actually on a soap opera together called Midnight Meadows playing a husband and wife duo. I know — it's crazy!

OK, OK, just kidding. So, Winfrey and Fallon weren't actually on a soap opera together back in '80s, but they were in a soap opera skit together during Monday night's episode. Featuring wacky vocal effects and Fallon's signature zany humor, the skit was definitely a must-see — especially considering it includes autotune on Oprah Winfrey, something I know I never thought I would actually see. Ever.

Pro-tip: Definitely stick around until the end of the skit to see a majorly gifable moment.

Winfrey appeared on The Tonight Show to promote her role in the upcoming film Selma, which is based on the real-life civil rights marches led by Martin Luther King Jr., James Bevel, and Hosea Williams that took place in Selma, Alabama in 1965.

You can check out the clip below. Selma is set to hit theaters nationwide on Jan. 9, and will be in select cities on Christmas day.