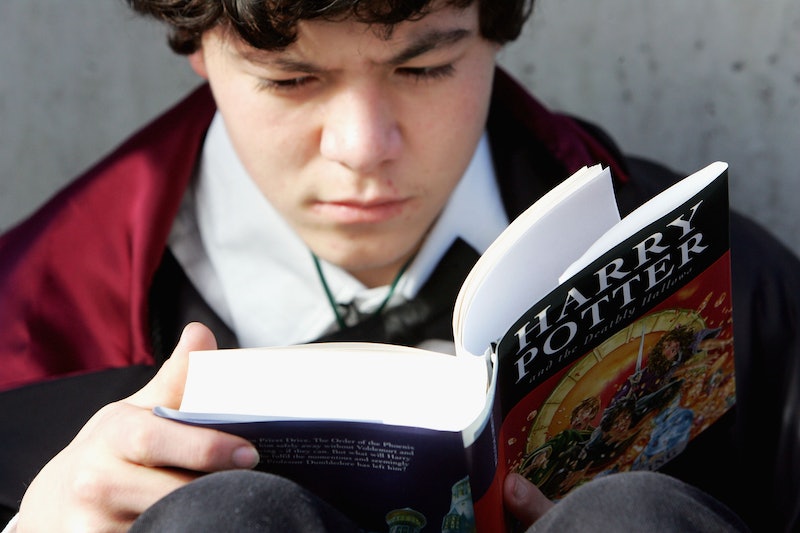 No, you aren't thinking of another popular 2000s young adult series (*cough* Vampire Academy): J.K. Rowling released new information Thursday saying that vampires were intended to play a larger role in the Harry Potter universe. After two days in the 12 days of Pottermore Christmas gifts event, she let readers know on Day 6 that (spoiler! spoiler!) Rowling had originally intended to have a vampire teacher at Hogwarts. And no, despite fan rumors, that vampire teacher was not going to be Professor Snape.

Every day during the Christmas season, Harry Potter fans can solve one of Rowling's notorious riddle to "unlock" information or content about the series. Day 6's riddle went as follows:

With vampires and authors and a gate crashing MalfoySlughorn's Christmas party is one for (almost) all to enjoyMuch to the surprise of fans, friends and the restWhich loony Ravenclaw does Harry bring as a guest?

When you solve the riddle (and no, I'm not going to give you the answer!) you get some inside info from Rowling as your prize:

Although vampires exist in the world of Harry Potter, as shown by the literature that Harry and his friends study in Defence Against the Dark Arts, they play no meaningful part in the story.Looking back through my earliest notebooks, however, I found that on my very earliest list of staff, there was a subjectless vampire teacher I had forgotten, called “Trocar”.Evidently I did not think much of him as a character, though, because he disappears fairly early on in my notes.For a long time there was a persistent fan rumour that Snape might be a vampire. While it’s true that he has an unhealthy pallor, no corpses with puncture marks in their necks ever turn up at Hogwarts.

Day 6 marked the first day since Day 3 that gave riddle-solvers new tidbits on Rowling and the Harry Potter universe. It comes after Harry Potter fans were (understandably, IMHO) disappointed to have "misunderstood" a Pottermore message stating that there would be new stories for 12 days before Christmas. Pottermore corrected itself to say that not every day would have new writing, like the Dolores Umbridge backstory on Halloween, but would have new content — such as this little vampire trivia or Day 1's anecdote the fictional town of Cokeworth.

To add to the frustration, days 4 and 5's "new" content wasn't really anything at all. Day 3 explained why Snape was named potions master (because Rowling hated chemistry class). The day before, Rowling admitted to the character she least liked killing off: Florean Fortesque, owner of Diagon Alley’s ice cream parlour.

But don't get all down on Pottermore Christmas yet. Rumor has it there's a Draco Malfoy story (cross your fingers it's a story story!) to come, and you know we'll all be working extra hard on that riddle.